In the previous article that we wrote on our hypothetical couple - John and Lisa - we tried to demonstrate how they could retire in 10 years, starting with a modest savings of $300,000 at the age of 50 years that would grow to $1 Million by the time they actually retire at 60. We had assumed their annual income to be $140,000 and that they would save 16% of their annual income for the next 10 years to reach their goals.

Not surprisingly, some readers complained that $1 million was too high a target and not everyone would have the means to save such a large sum. On the flip side, some others argued that even $1 million does not go far enough these days to afford a comfortable retirement. Though this subject is highly debatable and obviously the savings target and spending expenses will vary from person to person based on personal situations. There are always two sides of a coin, and there is some element of truth on either side of the argument.

Retirement Planning with Half a Million:

Obviously, it goes without saying that we should always aim higher and save as much as possible. That said, everyone's situation is different. We thought it would be worthwhile to work out an alternate retirement planning scenario, where the couple’s current income and spending habits/expenses are much more modest, hence their retirement goal would be much lower at $500,000. We will assume their current annual income at $90,000.

Please note that this couple's spending needs would be lower as well. In the previous scenario, we had determined it to be $75,000 a year (adjusted for inflation). However, in this example, our hypothetical couple - John and Lisa - would need only about inflation-adjusted $60,000 a year (or $47,500 in today’s dollars). This is in line with the average spending of retired folks in the US. According to a recent article based on the data from the Bureau of Labor Statistics, “older households” spend an average of only $45,756 a year, or roughly $3,800 a month. Older-households are defined as those run by someone 65 and older. This is about $1,000 less than the monthly average spent by all of the U.S. households combined. Also, please note that this is just an average, which means there are a lot of households that spend even less than $3,800 a month.

Comparison of $1 Million vs. Half a Million Retirement:

So, the new set of assumptions will look like below:

Though 7% annual return is very reasonable, it is a very critical assumption that can make or break John and Lisa’s retirement planning. We will discuss strategies that can help achieve very modest targets of 7% to 8% return.

Below, we will present the investment results with two different rates of return, 7%, and 8%. 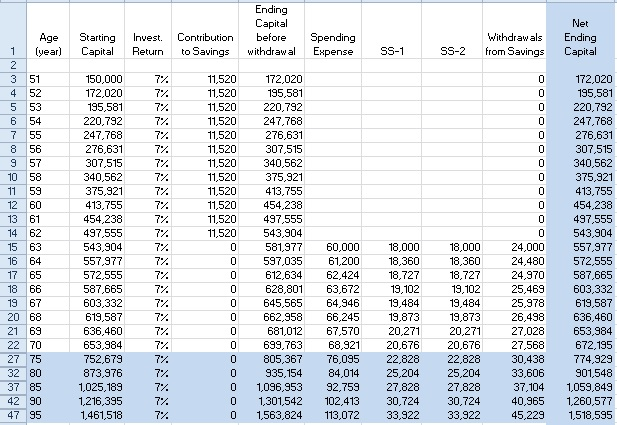 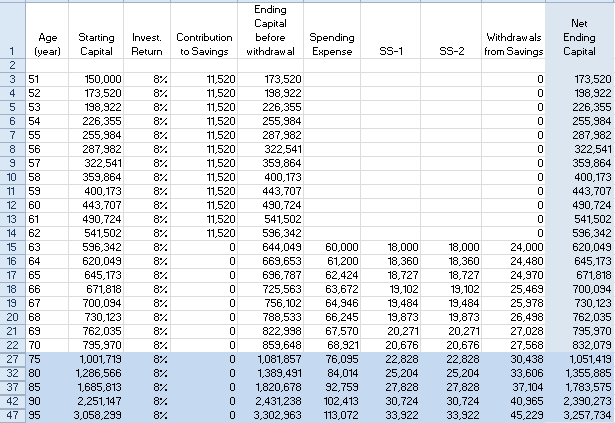 Note: To keep the image readable, after the 70th year, we have only presented net balances at the end of every five years.

The above examples show that John and Lisa’s investments grow in both cases. Of course, they grow much faster if the rate of return on their investment was 8%. A return of 9% or more will actually do wonders for their retirement balances. But even with 7% return, they will be able to manage a comfortable retirement with their principal growing albeit slowly. We have included the calculations until the age of 95 years.

Though the stock market has returned more than 9% on a long-term basis, however, there is no certainty of constant returns. It can go up sometimes and can also go down a lot during recessions or major corrections. If a recession was to hit early in the retirement phase, it could be devastating on the retiree’s finances. So, all of this planning and calculations require that the retiree invests wisely and able to get an average return of 7% or higher.

How to Grow Your Investments at 7% and Higher:

We can see from the above examples, the importance of the rate of investment returns that John/Lisa is going to get. This is critical in determining if they are going to have a very comfortable retirement or are they going to have to worry about money and cut corners.

However, fortunately, we are not aiming for some dramatically high rates of returns. We are only talking about 7-8% returns on an average basis. The stock market has provided on an average of 9% returns over long periods of time. But two things need to be kept in mind. First, this average is “over long periods of time,” and not necessarily the similar return year after year. Secondly, this is just an average, and it means that so many retail investors get much lower and sub-par returns due to several reasons, including keeping too much in cash, buying at peak and selling in panic situations. Below we will demonstrate how to avoid many of the above pitfalls and aim for at least 7-8% overall returns on a consistent basis.

There are several ways to meet this goal. We have presented many strategies in our past articles. We prefer to adopt more than one strategy to provide strategic diversification. Below we present one such model.

Author’s note: We provide many of the above strategies and portfolios in our Marketplace Service “High Income DIY Portfolios.”

We present (see below) a sample DGI portfolio consisting of 20 names, a majority of which are relatively conservative names, provide a decent dividend and trading at a relatively cheap valuation. If you are putting new capital into the portfolio, we recommend buying in 4 or 5 separate lots spread over a year at least. This will avoid a situation where the market has a major correction just after you buy.

This strategy aims for about 9% or higher returns on a relatively consistent basis, with minimal drawdowns. The strategy uses only two securities, S&P500 Index fund ( SPY) and 20-year Treasury Fund ( TLT). The strategy invests and rotates between the two securities based on volatility measurements. The basic premise is that the lower the volatility in S&P500, more of the investment dollars should be committed to Stocks or S&P500 in this case. As the volatility in stocks or S&P500 increases, the strategy gradually moves money to the Treasury fund, as a safety asset. Some would critique that Treasuries have been on a bull run over the last couple of decades and it may not work the same way in the future. However, it is our belief, that during a crisis and panic situations and/or sudden downturns, Treasuries will always perform reasonably well, since investors find safety in them. If someone does not like long-term Treasuries at this time, it could be replaced with 7-10 year mid-term Treasury Fund ( IEF). However, the overall results may vary or suffer a little bit.

Below we present the results from using this monthly rotation strategy since the year 2003, using the above two securities, S&P500 and TLT ( using the annualized volatility target of 8% over the previous month). 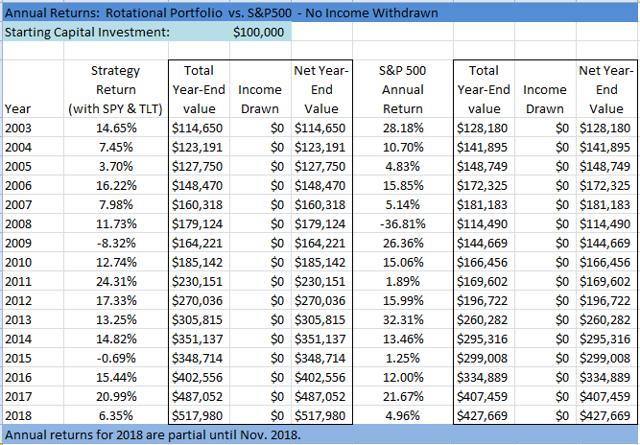 Results with 6% annual income withdrawn from each of the portfolios: 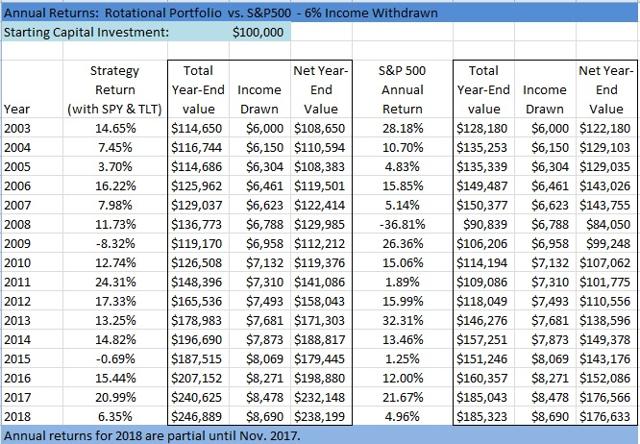 As one can see, the strategy performs better than S&P500 and at the same time without the bumps. When the income is withdrawn (on a yearly basis), the strategy performs even better and ends with much higher balances compared to S&P500. In the case of S&P500, the retiree is forced to withdraw the income at times when the market is doing poorly, which results in overall inferior results.

We tried to demonstrate that even with half the starting capital (compared to $1 million in the previous article); John and Lisa would be able to have a reasonably comfortable but modest retirement. Obviously, this modified strategy requires some sacrifices and compromises. We also demonstrated how small decisions could change the outcomes for anyone. So, planning is important and almost always dependent on personal factors and situations. There is, of course, no substitute for saving more and starting as early as possible. It is always better to aim for more rather than less.

If one had a long time horizon, an investment in broad market indexes can also provide good results, but the investor needs to be prepared for a bumpy ride and big drawdowns. This is where the risk comes since most people are not prepared for big drawdowns. The above example shows that a Rotation strategy can smoothen the ride, which will also result in higher returns, especially during the withdrawal stage.

We could see in the above examples how critical is the rate of return on our investments. It is important to invest wisely and grow the savings on a consistent basis. A return of less than 6% might result in a gradual depletion of John/Lisa’s savings into their 80’s or 90's unless they were able to reduce their spending. Two things stand out – first, we need to get a minimum of 7% return and secondly with minimum possible volatility and drawdowns. Fortunately, 7% or 8% is not a very ambitious growth target and highly feasible for most folks with some knowledge and by avoiding the common pitfalls.

Full Disclaimer: The information presented in this article is for informational purposes only and in no way should be construed as financial advice or recommendation to buy or sell any stock. The author is not a financial advisor. Please always do further research and do your own due diligence before making any investments. Every effort has been made to present the data/information accurately; however, the author does not claim 100% accuracy. The stock portfolios presented here are model portfolios for demonstration purposes.

High Income DIY Portfolios:  The primary goal of our "High Income DIY Portfolios" Marketplace service is high income with low risk and preservation of capital. It provides DIY investors with vital information and portfolio/asset allocation strategies to help create stable, long-term passive income with sustainable yields. We believe this service is appropriate for income-seeking investors including retirees or near-retirees. We currently provide six portfolios: two High-Income portfolios, a DGI portfolio, a conservative strategy for 401(K) accounts, a Sector-Rotation strategy, and a High-Growth portfolio. For more details or a two-week free trial, please click here or on the image below our logo above.

I am an individual investor, an SA Author/Contributor, and manage the “High Income DIY (HIDIY)” SA-Marketplace service. However, I am not a Financial Advisor. I have been investing for the last 25 years and consider myself an experienced investor. I share my experiences on SA by way of writing three or four articles a month as well as my portfolio strategies. You could also visit my website “FinanciallyFreeInvestor.com” for additional information.

I focus on investing in dividend-growing stocks with a long-term horizon. In addition to a DGI portfolio, I manage and invest in a few high-income portfolios as well as some Risk-adjusted Rotation Strategies. I believe "Passive Income" is what makes you 'Financially Free.' My personal goal is to generate at least 60-65% of my retirement income from dividends and the rest from other sources like real estate etc.

My High-Income CEF/BDC/REIT positions include:

In addition to my long-term positions, I use several "Rotational" risk-adjusted portfolios, where positions are traded/rotated on a monthly basis. Besides, at times, I use "Options" to generate income. I am also invested in a small growth-oriented Fin/Tech portfolio (NFLX, PYPL, GOOGL, AAPL, JPM, AMGN, BMY, MSFT, TSLA, MA, V, FB, AMZN, BABA, SQ, ARKK). From time to time, I may also own other stocks for trading purposes, which I do not consider long-term (currently own AVB, MAA, BX, BXMT, CPT, MPW, DAL, DWX, FAGIX, SBUX, RWX, ALC). I may use some experimental portfolios or mimic some portfolios (10-Bagger and Deep Value) from my HIDIY Marketplace service, which are not part of my long-term holdings. Thank you for reading.

453 Comments
To ensure this doesn’t happen in the future, please enable Javascript and cookies in your browser.
Is this happening to you frequently? Please report it on our feedback forum.
If you have an ad-blocker enabled you may be blocked from proceeding. Please disable your ad-blocker and refresh.