LBRT to return to a growth path

Liberty Oilfield Services (NYSE:LBRT) provides hydraulic fracturing services to the onshore energy E&P companies in the Permian Basin, the Eagle Ford Shale, the DJ Basin, the Williston Basin, and the Powder River Basin in North America. The current industry headwind in the hydraulic fracturing market has slowed down LBRT’s operating margin expansion. The pricing pressure is likely to continue in Q1 2019 as well. But, LBRT’s capacity expansion plans and cost management initiatives indicate the company is poised to take advantages of the industry turnaround. I expect LBRT’s stock price to rebound in the medium-to-long term. In 2018 so far, Liberty Oilfield Services' stock price has gone down by 26%, while VanEck Vectors Oil Services ETF (OIH) declined by nearly 31%. OIH represents the oilfield equipment & services (or OFS) industry.

The industry drivers and LBRT

LBRT recognizes revenue for each fracturing stage completed. The number of fracturing stages is directly related to the number and utilization of LBRT’s deployed fleets and size of stages. In this context, it is essential to understand the trend in drilling and hydraulic fracturing activity. Over the past several years, North American E&P companies have benefited from improved drilling economics driven by technologies that reduce the number of days, and the cost, of drilling wells. North American drilling rigs have incorporated newer technologies, which allow them to drill rock more effectively and quickly, meaning each rig can drill more wells in a given period. The aggregate effect of these improved techniques and technologies have reduced the average days required to drill a well. As wellbores have increased in length, the number of stages has also increased. From 2014 to 2017, the average stages per horizontal well have risen from 21 stages per well to 35 stages per well, according to LBRT’s 2017 10-K. The improved rig efficiencies and increasing well completion complexity and intensity will require expanding OFS services and support. 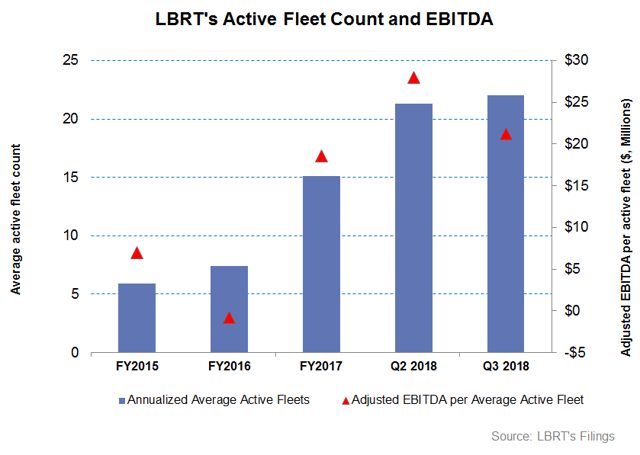 In Q3 2018, the number of active fleets has continued to increase compared to the beginning of the year. While the annualized average active fleet increased by 46%, adjusted EBITDA per fleet increased by 14% during this period. The decline in EBITDA per fleet reflects a flatter hydraulic fracturing pricing environment compared to 2017. The slowdown became prominent in the second half of 2018 as pressure pumping supply that was built for expected completions growth outstripped the flattening completions growth curve. This was most visible in the Permian Basin.

The Permian bottleneck: While there has been to excess capacity of frac assets in the Permian following a production surge, there was a lack in corresponding capacity addition in infrastructure, namely takeaway pipeline build-up. The takeaway capacity bottleneck in the Permian has led to reduced local crude oil pricing as compared to WTI and Brent-linked benchmarks. So, the region’s pipelines constraints have prompted its customers reducing their drilling and completion activities. LBRT, which primarily operates Permian Basin, the Eagle Ford Shale, the DJ Basin, faces near-term operational risks due to this.

Seasonality: In a typical year, LBRT’s Q4 revenue typically declines by mid-single digits compared to summer quarters due to the holiday season and budget management by producers. In Q4 2018, too, LBRT’s financial results are likely to deteriorate further by seasonality.

Pricing has hit bottom: In Q4 2018, pricing for LBRT’s frac fleet decreased. Lower demand for frac spreads in the U.S. caused the fall. The decrease in material cost has lowered frac stages cost, which enabled LBRT to decrease the prices of its offerings. Now, from here on, LBRT’s management expects prices to remain flat in Q1, and then improve in the latter part of 2019. Regarding this, the management commented in the Q3 earnings call,

“But I would expect pricing actually relatively flat or what it will be in Q4, what it will be in Q1. But I think we'll have a better more efficient you know higher throughput schedule in Q1, but pricing was as dynamic. It is not based on what we may have two fleets in our entire thing. That is like thoroughly contracted for a full year at a set price, almost all the others agreed upfront. But as market conditions change either way we talk and we adjust as it happens.”

In its November IR presentation, LBRT revised down its earlier guidance and indicated that its Q4 revenues may decline by ~10% compared to Q3. Based on lower revenues, LBRT now also expects $5 million to $6 million lower adjusted EBITDA per fleet compared to Q3. This is even lower than its previous EBITDA guidance.

Liberty’s capacity addition and technology: The upstream and midstream operators have projects lined up to de-bottleneck the capacity constraints in 2019. This, plus a more conducive macro commodity environment should alleviate the over-supplied condition, which can lead to pricing to strengthen in the second half of 2019. Demand for dedicated fleets looks to be strong in 2019. LBRT is set to deploy a couple of additional fleets in the first half of 2019, which should take its fleet count to 24. These fleets are currently under construction. LBRT’S management sees increased demand in West Texas and the Eagle Ford in 2019. However, with near-term lack of demand, the additional fleets would be deployed only when demand surfaces strongly.

With the current capacity addition plans, LBRT is on course to have ~1.2 million HHP under its belt by H1 2019. Its assets are classified as Liberty purpose-built frac fleet, Liberty quiet fleet, Liberty high-pressure frac fleet and Liberty pump down and pump services. LBRT has also integrated engineering and big-data approach with its proprietary software to lower customers’ cost to produce crude oil. An example of LBRT’s use of technology is the application of the quiet fleet, where technology enables LBRT’s customers to develop acreage near populated areas. Another example would be the use of technology for real‐time control over last mile sand logistics for optimized trucking fleet utilization. These innovative techniques are LBRT’s differentiator in today’s competitive OFS market.

Cost management strategies: LBRT is sourcing additional local sand volumes, which are driving down well costs for its customers. It has ramped up to pumping over 70% local sand in the Permian Basin in Q3. LBRT is also weighing between taking the most cost-effective logistics management decision. Despite increasing use of in-basin sand, more than 60% of the sand Liberty pumps in 2019 are expected to move by rail.

The other aspect of LBRT’s fleet operation is the use of legacy mechanical-powered fleet rather than AC fleet. LBRT is considering including the AC fleet. However, its current fleet is not inefficient, because 40% of its capacity is dual fuel, which means most of these run on cost-effective natural gas and partly on diesel. So, replacing the fleet would be uneconomical at this point.

In the past four quarters of 2018, LBRT generated $303.65 million in cash flow from operations (or CFO). Since January 2018, LBRT has repaid nearly $92 million of debt from the proceeds of an IPO. As of September 30, LBRT’s credit facility included a $250 million revolver. It has also repurchased ~$54 million of shares in the first nine months of 2018. In the past three quarters of 2018, LBRT has spent $187 million in capex. With the available liquidity (cash balance and revolving credit facility), and at the current cash flow generation run rate plus no debt repayment obligations in near-term, LBRT’s balance sheet looks comfortably placed.

What does LBRT’s relative valuation say?

What’s the take on LBRT?

In the near-term, LBRT expects lower-than-usual Q4 2018 revenue and a steeper EBITDA-per-fleet decline versus its usual decline due to seasonality. The higher decline rate reflects completion activity slowdown, lower demand for the frac spread, and the Permian constraints.

However, LBRT is likely to be at the bottom a pricing cycle and can see gradual improvement in pricing in the latter part of 2019. It also plans to put in place two more frac fleets in 2019. The long-term industry drivers in the hydraulic fracturing market have not changed. Horizontal drilling and the requirement for pressure pumpers will continue to stay robust in the U.S. unconventional shales. LBRT’s balance sheet is also strong. Its finances will, however, be tested if it opts to convert its pumping fleet to AC power. LBRT can be a good investment in the medium-to-long run, although its returns in the short-run may not be encouraging.