Ardent Health Partners (ARDT) intends to raise gross proceeds of $100 million from a U.S. IPO, according to an S-1 registration statement.

The firm, formerly known as Behavioral Healthcare Corporation, operates a network of hospitals and healthcare facilities, mostly in the lower Midwest and South.

ARDT has grown recently through several acquisitions, so management’s pricing and valuation assumptions will be critical for the IPO’s potential value to investors.

Nashville, Tennessee-based ARDT was founded in 1993 to acquire and develop a network of acute care hospital and healthcare facilities across Texas, New Mexico, Oklahoma, New Jersey, Idaho, Florida, and Kansas.

Management is headed by Director, President and CEO David T. Vandewater, who has been with the firm since its inception and was previously President and COO at Columbia/HCA Healthcare Corporation.

As of Sep. 30th, 2018, ARDT operated ‘31 acute care hospitals, including one managed hospital, two rehabilitation hospitals and two surgical hospitals, with a total of 4,718 licensed beds, and provided physician and other ancillary healthcare services through a network of more than 1,000 employed providers.’

Below is an overview image of the company’s geographic footprint: 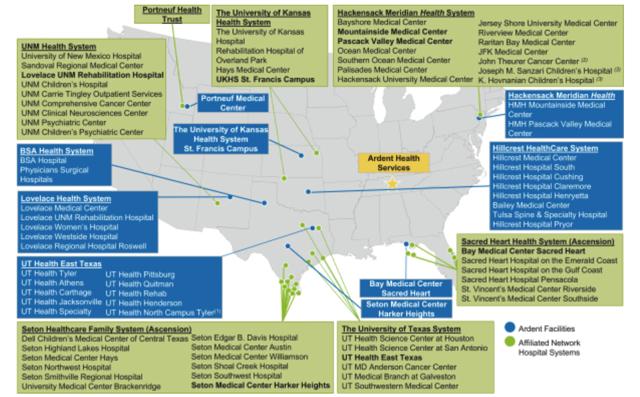 According to a 2018 market research report by Market Research Future, the global acute hospital care market is projected to grow at a CAGR of 7.8% between 2017 and 2023.

The main factors driving market growth are the ‘rising incidences of trauma injury, the presence of a large base of the patient population, increasing number of hospitals, and unmet medical needs in emerging economies.’

North America dominates the market, while the Asia-Pacific region is projected to grow at the fastest rate due to the ‘rapidly developing healthcare technology, huge patient population, and high healthcare expenditure.’

Major companies that provide acute hospital care in the U.S. include:

ARDT’s recent financial results can be summarized as follows:

Below are the company’s pro forma financial results for the first nine months of 2018 (Unaudited, interim): 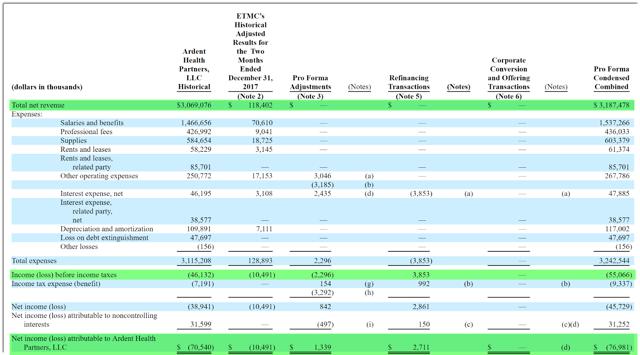 ARDT intends to raise $100 million in gross proceeds from an IPO of its common stock, not including customary underwriter options. The final figure may be as high as $200 million.

Per the firm’s latest filing, it plans to use the net proceeds from the IPO as follows:

We intend to use the net proceeds from this offering to repay certain outstanding indebtedness and the remainder for general corporate purposes, which may include acquisitions of healthcare facilities or related businesses.

Management’s presentation of the company roadshow is not currently available.

Expected IPO Pricing Date: Not yet on the calendar.

An enhanced version of this article on my Seeking Alpha Marketplace research service IPO Edge includes my initial commentary on the IPO.

Members of IPO Edge get the latest IPO research, news, market trends and industry analysis. Get started with a free trial.