Valero (NYSE:VLO) has plunged 34% in the last two months. As a result, it is now trading at a 52-week low while its dividend yield has climbed to 4.1%. In addition, the refiner is expected to raise its dividend next month, most likely from $0.80 to $0.90 per quarter (more on this below) so it will be offering a 4.6% dividend yield from next month. Investors should take advantage of the attractive level of Valero, which has resulted from its extended decline.

The reasons behind the plunge

One of the reasons behind the plunge of all the U.S. refiners is the fact that they had enjoyed a breathless rally until last summer. To be sure, Valero doubled in the nine months leading to May-2018. The primary driving force of the rally was the new international marine standard, which will come in force in January-2020. According to the new standard, all the vessels that will sail in international waters will be forced to burn low-sulfur diesel instead of heavy fuel oil. As the former is much more expensive than the latter, it will provide a great boost to the refining margins.

Overall, part of the recent correction can be viewed as a healthy correction from overvalued levels. In fact, I warned investors of the huge downside risk of Valero back in May, when it was trading 50% higher than today.

Moreover, the recent plunge was caused by a WSJ report, which was issued almost two months ago. According to that report, the Trump administration was trying to postpone the implementation of the new international marine rules in the U.S. As the rally of the domestic refiners had been based on the benefit of refiners from the new marine rules, the recent plunge of domestic refiners is understandable to some extent.

While the market is concerned over the efforts of the government to postpone the implementation of the new marine rules in the U.S., it is doubtful whether the government has the power to achieve such a deal. Even if it does succeed, it will probably be able to postpone the new rules by one or two years. Therefore, domestic refiners will eventually benefit from the new rules and will thus see their margins expand significantly from their current levels. Valero is ideally positioned to benefit from the new marine rules, as it has a peer-leading distillate yield. In other words, it produces more high-valued products than its peers from a given amount of crude oil. 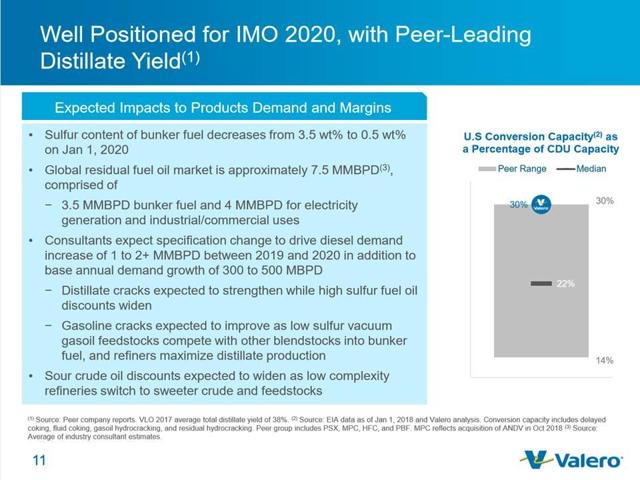 Moreover, thanks to its extended downtrend, Valero currently has a markedly attractive valuation. The stock is trading at a current P/E ratio of 12.6 and a forward P/E ratio of 8.4. The cheap valuation is positive for two reasons. Not only does it increase the expected returns of the stock, but it also renders the share repurchases much more efficient, as the same amount of buybacks reduces the share count at a faster pace. This is important because Valero performs meaningful share repurchases. To be sure, in the last five years, the company has reduced its share count at a 4% average annual rate. Thanks to its cheap valuation, it is likely to continue to reduce its share count at a similar pace in the upcoming years. This will be a significant growth driver for its earnings per share.

Given the above, it is only natural to expect Valero to raise its quarterly dividend by another $0.10 next month, from $0.80 to $0.90. Such a hike will raise the dividend yield to 4.6% at the current stock price. Therefore, investors can purchase this best-of-breed refiner at a markedly high yield and rest assured that the dividend will continue to rise thanks to the above growth prospects, the low payout ratio and the healthy balance sheet.

When Valero was trading at a 50% higher level back in May, I warned investors of the meaningful downside risk of the stock. Indeed the stock has incurred a violent correction in recent months, along with the other domestic refiners. However, the correction has become extreme and has now led the stock to bargain territory. As the stock is likely to be offering a 4.6% dividend yield from next month, when it announces its next dividend hike, investors should take advantage of this opportunity. They will purchase the stock at an attractive entry point and will rest assured that the dividend will continue to rise for the foreseeable future.

Aristofanis Papadatos
8.07K Followers
I am a chemical engineer with a MS in Food Technology and Economics. I am also the author of 2 mathematics books ("Arithmetic calculations without a calculator" and "Word Problems") and perform almost all the calculations in my mind, without a calculator, making it easier to make immediate investing decisions among many alternatives. I invest applying fundamental and technical analysis and mainly use options as a tool for both investing and trading. I have nearly achieved my goal of early retirement, at the age of 45. In my spare time, I follow Warren Buffett's principle: "Some men read playboy. I read financial statements".
Follow