What makes the present situation, despite the still solid economic growth in the US, so dangerous is that markets focus on equilibrium restoring mechanisms and tend to ignore (or have complete blind spots for) self-reinforcing ones.

This is a residue of the 19th century mechanical approach (imported from science) of equilibrium economics in which free price movements equate demand and supply and restores market equilibrium. Economics knows of several exceptions:

There are also at least two of these self-reinforcing mechanisms that can worsen slumps:

Debt-deflationary cycles were in full display in the 1929-32 and 2008-9 financial crisis, producing very different outcomes as policy reaction was much more astute the second time around in short-circuiting these events: 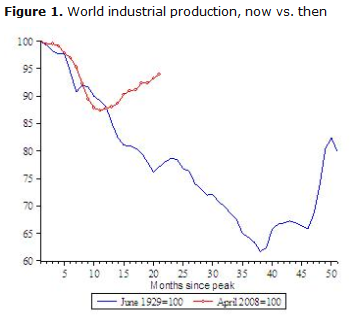 But, especially given its late cycle implementation, it also generates forces that mitigate its impact.

Leaving these mitigating forces aside, we think the main impuls from the Trump tax cut was actually through that ephemeral concept called sentiment, much less actual spending, from Bloomberg: 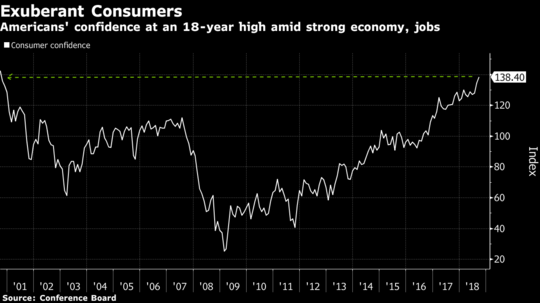 Business sentiment was perhaps even more bullish, from Tradingeconomics:

As companies didn't actually CapEx all that much in response to the tax cuts, from CNBC (our emphasis):

Consumer spending, which accounts for more than two thirds of U.S. economic activity, grew by 4 percent in the third quarter, the strongest since the fourth quarter of 2014. The strong rise in consumer spending helped offset a 7.9 percent decline in business spending. That was the biggest quarterly decline in business spending since the first quarter of 2016.

Since by far the biggest tax cuts where for business, rather than income tax this is at least indicative of the impact being sentiment induced, rather created by than actual effects on disposable income from the tax cuts.

Driven by the positive sentiment GDP growth reached 4.2% in Q2 even if part of this came from a surge in exports which was in part trade-war related (Buying ahead of tariff implementation): 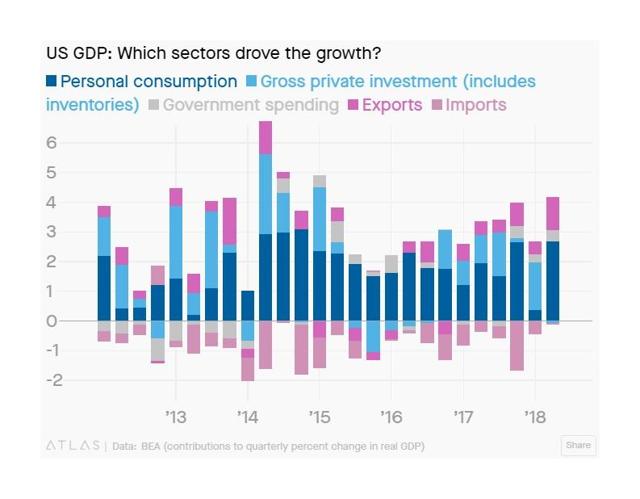 And then there is of course that ultimate sentiment index, the stock market. Most of the great Trump stock rally was based on the prospect of, and then implementation of tax cuts, more in particular corporate tax cuts.

The benefits are obvious, corporations paying less tax on their earnings mean they keep more of them, increasing net earnings significantly. 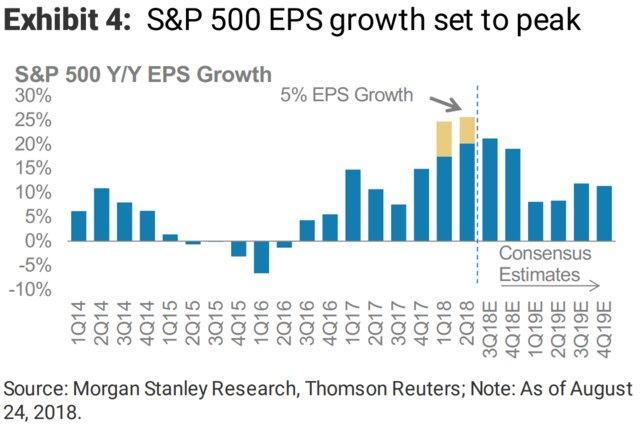 You see a 25% earnings rise in Q2 (y/y) which is quite remarkable this late in the cycle. But you already see one problem emerging, peak earnings. What's the problem, you might ask.

After all, the stock market didn't go up 25% this year so it has gotten cheaper, and earnings are still projected to rise next year, which should to set us up for a nice rally (trade war and Italy providing).

But here is where things seem to turn south, pick your reason, these are by no means mutually exclusive:

Apart from perhaps the no-deal Brexit and especially the Italian budget (which is another self-reinforcing situation which we described here), this doesn't seem to be enough for the wild sell-off we're seeing in the markets, the economy and earnings are still expected to grow healthily next year.

But there is another danger lurking from this worsening of sentiment. This could be another self-reinforcing feedback loop in the economy and basically reverse of what we've seen happening in 2018.

The most well known proponent of this mechanism is economist Roger Farmer, who argued (Project Syndicate, our emphasis):

For the aficionado's, Farmer has set out his model in numerous articles (and even a book last year which was reviewed by SA contributor Brian Romanchuk here on SA), the most accessible of these is the one from Voxeu (our emphasis):

New Keynesian macroeconomic policy is based on the assumption that prices and wages are ‘sticky’. We assume instead that expectations are ‘sticky’ as a way to explain the real effect of monetary shocks. Following Farmer (1999, 2013), we model this idea by introducing a 'belief function' as a new fundamental... In our model people form beliefs about the future value of their stock portfolio. We assume that this belief is sustained and self-fulfilling and we identify it with what Keynes called ‘animal spirits’. A permanent shock that raises animal spirits lowers the unemployment rate forever.

We won't bother you with the technicalities of the model, but in our view there are some advantages:

It is important to note that the above causation also works the other way around, or "if we feel poor, we are poor." that is, if stock price falls become big enough they tend to produce a self-fulfilling prophesy by depressing real production and employment.

While such self-fulfilling prophesy is clearly a problem, the solution (or at least a policy instrument which can counter the situation) suggests itself.

If sentiment depends on stock prices, central banks should stabilize stock prices, is a pretty logical conclusion. According to some, the Fed is raising rates because it thinks it can't lower them enough from present levels to counter the next recession.

Worry no more, it doesn't have to, when the next recession hits (or perhaps even better, before that actually happens), it should simply buy stocks. It can sell these stocks in times of euphoria, which can prevent bubbles to form.

If sentiment depends on asset prices and if it can feed on itself, producing real outcomes influencing output and employment, then there is a case to be made for the central bank to intervene.

This isn't different in kind to what it already does with asset prices, it's 'leaning against the wind' just the same, only with other activa.

We are not entirely convinced, but it's an interesting idea nevertheless. We think there is a clear case that asset prices can create positive feedback loops through sentiment, we think we've just witnessed this in the run up to the Trump tax cuts.

Asset prices, and hence sentiment, started to improve well in advance, and on first evidence the tax cuts, which were mainly corporate tax cuts did not create much additional spending.

It's also possible that the present rapid deterioration in the markets fouls sentiment to such an extent that it becomes a self-fulfilling prophesy, taking down growth and employment with it.