Shares of Zynerba Pharmaceuticals (NASDAQ:ZYNE) have lost a third of their value since I initially brought this small biotech firm to readers' attention. The first time around, in my personal account, I played the runup to clinical results for a double and change before selling prior to data. On the other hand, the stock has shed over 60% of its value since my article from last December stated that the bullish case had strengthened.

When looking at charts, clarity often comes from taking a look at distinct time frames in order to determine important technical levels to get a feel for what's going on. In the first chart (daily advanced), we can see continued weakness in the second half of the year due in part to a poorly timed secondary offering and "sell the news" reaction on positive mid-stage data. In the second chart (15-minute), we can see shares trading in a range near the 52 week low.

In my last update piece, keys to the bullish thesis presented included the following:

On July 5th, the company announced disappointing top line data for second drug candidate ZYN001 (pro-drug of tetrahydrocannabinol delivered via a transdermal patch) in healthy volunteers. While the fact that target blood levels of 5 to 15 ng/ml THC were not achieved caused the stock to tank, at the same time a silver lining is that as a result the company is focusing its resources on a more lucrative lead program that's further along.

Later on management decided to extend the operational runway via secondary offering, with over 4 million shares sold at a price point of $8 for net proceeds of $30 million.

Also in July, the company initiated the CONNECT FX randomized, double blind, placebo-controlled trial evaluating ZYN002 in children ages three to 17 with full mutation Fragile X syndrome. While there's significant risk in the trial making the jump from open-label to randomized study, if successful a first to market product for the treatment of behavioral symptoms for this condition would be a big win for the company and garner much attention in a market currently infatuated with anything "cannabis-related." 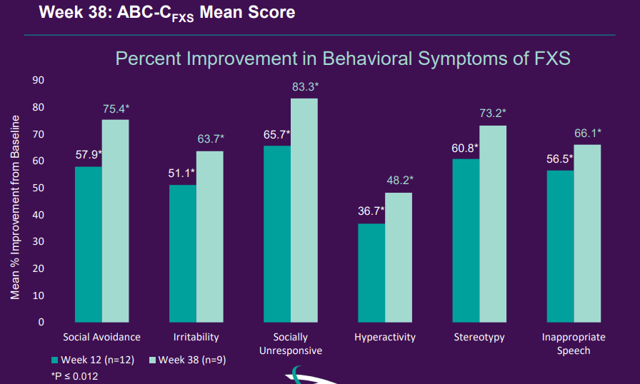 For the third quarter of 2018, the company reported cash and equivalents of $66.2 million as compared to net loss of $7.8 million. Research and development expenses totaled $4.9 million while G&A came in at $3.1 million. Management has guided for operational runway into the first half of 2020.

As for future catalysts of note, top line data for the CONNECT FX study is expected in the second half of 2019. In the very near term, we can expect updated longer-term data for ZYN002 in FXS to be presented at the ACNP (American College of Neuropsychopharmacology) Annual Meeting on December 12th. So far, it bodes well that improvement in key measures of efficacy reflecting improved core behavior symptoms of FXS continue to trend in the right direction, including social avoidance improvement as measured by the ABC-CFXS at 12 weeks (58%; p=0.0040) versus 38 weeks (75%; p=0.0013).

Management has stated that enrollment in the Phase 2 BELIEVE 1 trial is finishing up and data is expected in 2019. A Phase 2b trial in adult patients with refractory focal epilepsy should get underway around the end of the year.

For readers interested in the story, I suggest tuning into November's presentation at Piper Jaffray Healthcare Conference. Here are a few nuggets that stuck out to me: 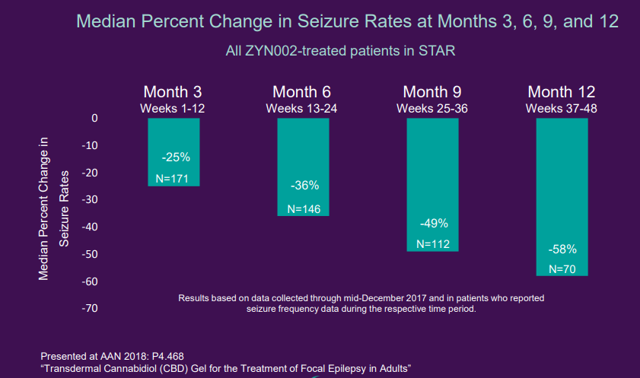 To conclude, Zynerba Pharmaceuticals appears to be more on the speculative side when it comes to catalyst and run-up ideas in the biotech sector. However, the current market capitalization of $85 million (around $20 million enterprise value or EV if cash is backed out) seems cheap considering data generated thus far and substantial market opportunities being targeted.

For readers who are interested in the story and have done their due diligence, there are multiple approaches you could take based on risk tolerance and time frame. One could be to establish a pilot position in the near term and wait for technical strength to add. A more conservative strategy could be to wait on the sidelines until the stock starts to show signs of life and then accumulate as the run-up gets underway. Given the risks involved (including binary nature of clinical readout) I suggest taking partial profits on the way up and holding no more than a half size stake through data (if at all).

Dilution in the near term appears unlikely given the current cash position and burn rate. Disappointing data in DEE and FXS readouts would weigh heavily on the stock (including possibility for outsized placebo response), as would any setbacks in the clinic including safety concerns or delays. The possibility of negative regulatory feedback is also a concern. Cash burn could increase significantly with clinical trials for all three programs underway, necessitating yet another financing of some kind.

As for downside cushion and elements of derisking, the current cash position accounts for about 75% of the market capitalization. That number should decrease in coming quarters as the burn rate rises and in the event of negative data the valuation could dip substantially below cash value. Prior data generated does add a slight element of derisking in lead indications, but this is still a speculative idea where the majority of an investor's capital could be lost.

Author's Note: I greatly appreciate you taking the time out of your day to read my material and hope you found it to be helpful in some form or fashion. If you´re willing, I look forward to interacting with you in the Comments Section. Whether bull, bear or simply a skeptic, we all typically have something worth saying and feedback (plus community-driven due diligence) is one of the reasons I enjoy writing. Have a good one!

Disclaimer: Commentary presented is NOT individualized investment advice. Opinions offered here are NOT personalized recommendations. Readers are expected to do their own due diligence or consult an investment professional if needed prior to making trades. Strategies discussed should not be mistaken for recommendations, and past performance may not be indicative of future results. Although I do my best to present factual research, I do not in any way guarantee the accuracy of the information I post. I reserve the right to make investment decisions on behalf of myself and affiliates regarding any security without notification except where it is required by law. Keep in mind that any opinion or position disclosed on this platform is subject to change at any moment as the thesis evolves. Investing in common stock can result in partial or total loss of capital. In other words, readers are expected to form their own trading plan, do their own research and take responsibility for their own actions. If they are not able or willing to do so, better to buy index funds or find a thoroughly vetted fee-only financial advisor to handle your account.

About 'ROTY or Runners of the Year'

ROTY is a 500+ member community which provides a welcoming atmosphere where due diligence and knowledge are generously shared. Subscription includes access to our 10 stock model account, exclusive write-ups on my favorite setups, Idea Lab, Catalyst Tracker, a very active & focused Live Chat and much more at an affordable price point ($25/month or $200 annually).

Founder of ROTY (Runners of the Year), a 500+ member community of biotech investors & traders focused on the intersection of value and accelerating clinical momentum.