Global: Last week, market sentiment started significantly positive after US President Trump and Chinese President Jinping announced a 90-day ceasefire at the G20 summit in order to decrease trade tensions between the two economies. Tariffs on the $50bn worth of goods implemented on July 6th and August 23rd last year will remain in place, however, the 10% tariffs on the $200bn that were supposed to be increased at the start of next year will be exempt until March 1st (Figure 1, left frame).

This action was immediately reflected in the equity market with futures soaring last Monday morning on hopes that new agreements would boost global economic activity. However, the excitement was short-lived as the arrest of the Chinese tech giant Huawei's CFO Wanzhou Meng created confusion and concerns over the trade war ‘truce’.

In addition, Saudi Arabia announced a smaller-than-expected crude oil production cut of 1 million bpd (vs. 1.3 million expected) at the OPEC meeting in Vienna, which weighed on oil futures prices. WTI front-month contract is currently flirting with the $50 level, down $25 since the beginning of October, adding downward pressure on inflation expectations.

US: Unemployment figures disappointed slightly on Friday, with November NFP coming in lower-than-expected at 155K (vs. 198K) while the unemployment rate remained steady at 3.7%. Wage growth was unchanged at 3.1% YoY, its fastest growth rate since April, confirming the firm trend in wage inflation. However, investors are more focusing on the yield curve, with the 2Y10Y currently trading at 14bps (according to Eikon Reuters) and slowly approaching the zero-percent threshold. As a reminder, the 2Y10Y curve inversion preceded 7 out of 7 past US recessions, therefore the ‘second’ leg of the bear market could start when the yield curve inverts fully.

EZ: The Euro area and its peripheral economies continue to show signs of weakness in the business activity with German, Italian, Swedish and Swiss GDP all contracting in the third quarter of this year. Pressure on Italian BTP has slightly eased recently with the 10Y trading at 3.1%, however, the political uncertainty in Italy has been replaced by the ‘yellow vest’ movement in France, expecting to slow down the growth outlook for the rest of the year. With a budget deficit of 2.8% expected in 2019, Macron will closely watch the 10Y on the OAT in the next 6 months as slowing growth combined with the ECB exit could potentially lift up the term premium.

Japan: Despite the size of the BoJ balance sheet surpassing the size of its economy (also bigger than the combined GDPs of five EM economies – Turkey, Argentina, South Africa, India and Indonesia), Japan GDP contracted sharply in the third quarter at -2.5% QoQ annualized, twice as bad as initially estimated, on the back of severe flooding in July, a powerful typhoon and the Hokkaido earthquake. Even though analysts expect the economy to recover in the last quarter, uncertainty around Chinese economic activity could prolong the downturn.

On aggregate, the reduction of net short speculative contracts continued in the week ending December 4th according to the CFTC report. Net shorts on the 5Y and 10Y were down 121K and 83K, respectively, in one week. Total net shorts are now down almost 1 million contracts since the end of September to 1.18M contracts. Are speculators pricing in a slowdown in the US economic activity?

EURUSD: Even though the single currency is still vulnerable to a widening spread between BTP and Bund yields or a sudden risk-off aversion, EURUSD has remained strong lately on the back of a US Dollar weakness. The pair is back above 1.14, trading at its 50 Fibo retracement of the 1.0340–1.2550 range. The trend looks bullish and could last for another 150 pips, however we prefer to play the euro against crosses such as sterling or yen for the time being. 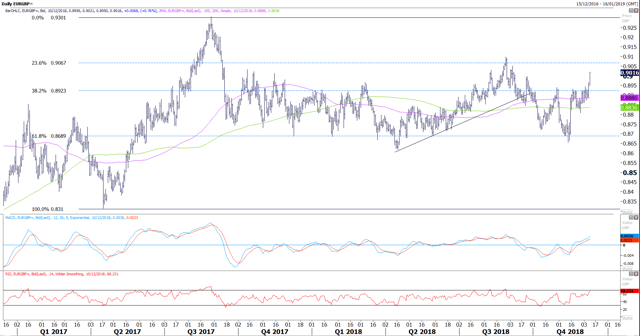 GBPUSD: Cable is still subject to a lot of price volatility as speculation continues on Brexit vote uncertainty. The pound still looks vulnerable in the short run, especially against the euro, USD and the yen. No recommendations on Cable for the time being, however, we will wait for lower levels to start building up a long position.

USDCAD: After breaking out of its downward trending channel, USDCAD has been on a bullish trend, testing the 1.34 level last week, which corresponds to the 76.4% Fibo retracement of the 1.2060–1.3780 range. The weakness in the Canadian dollar has been mainly attributed to the low oil prices. Two weeks ago, the Western Canadian Select (WCS) was trading at $11 a barrel ($40 discount compare to the WTI) due to the lack of pipeline capacity and a reduction in demand due to US refinery maintenance. The recent recovery (WCS trading at $27 in the beginning of the week) should limit USDCAD on the upside. It could be worth trying to sell some at 1.34. 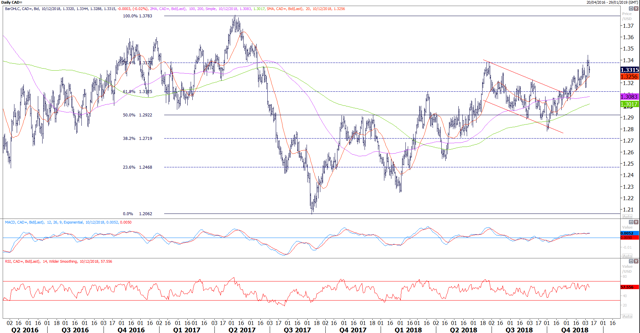 USDCHF: We are still short USDCHF with a first target at 0.99 as safe-havens such as the Swiss franc should strengthen in a USD consolidation period. In case this situation persists, we will set our second target at 98 cents. 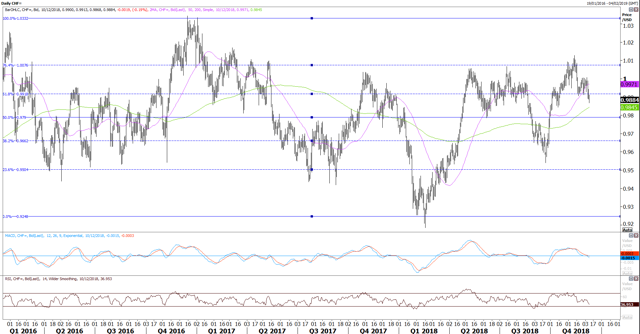 Chart Of The Week

Figure 6 (right frame) shows the percentage US marketable debt (FRN, Bills, Treasuries and TIPS) maturing within the next three years according to the Treasury Borrowing Advisory Committee (TBAC). We can notice that in the next 12 and 24 months, there is 28% and 41% of debt maturing, which corresponds to $4.3 trillion and $6.3 trillion, respectively, based on a total outstanding amount of $15.3 trillion.

With the US deficit expected to exceed $1 trillion in the Fiscal Year 2019 and 2020 (figure 6, left frame) and the 30-year bond auction experiencing its lower bid-to-cover ratio since 2009, it looks like the Treasury market may be under fire in the next two years, pressuring LT yields to the upside.

In addition, we saw previously that primary dealers holdings of US government debt are reaching record highs (here), which could be explained by the fact that banks cannot find buyers and therefore may emphasize the pressure on LT US yields.

Rothko Research
2.74K Followers
Rothko Research provides frequent analysis and updates on the current global macro themes. Looking at the financial markets from different perspectives, using either economic, political or financial factors, we are not afraid to go against the general consensus and challenge the conventional wisdom.//twitter: @RothkoResearchWebsite: https://rothkoresearch.com/
Follow

Disclosure: I am/we are short EURGBP, USDCHF. I wrote this article myself, and it expresses my own opinions. I am not receiving compensation for it (other than from Seeking Alpha). I have no business relationship with any company whose stock is mentioned in this article.