On December 21st, the Nasdaq-100 index (XNDX), which backs ETFs such as QQQ or is the benchmark index to a number of tech-focused mutual funds (both active and passive), will be re-balanced. However, the new weights can be calculated in advance, because the market cap weightings, subject to the various constraints, are applied as of the November 30th close. This is the list of the top 10 securities from the Nasdaq site as of the end of September, 2018 (Full PDF File). 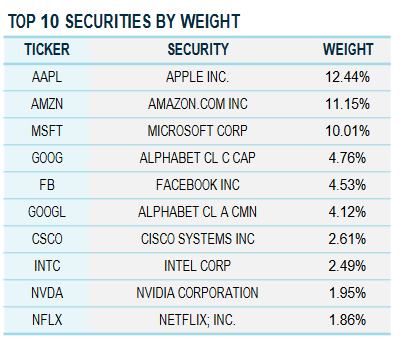 Apart from rules about minimum trailing volume, that companies cannot be in bankruptcy, etc., there are some concentration rules that are applied.

We should note that because GOOG and GOOGL are different share classes of the same corporate entity, for the purposes of this rule, their holdings would both be added. Summing over the greater than 4.5% weights in the above, we can see that the big companies came close to the 48% aggregate hurdle (47% and change) but didn’t quite exceed it.

The precise way indices are weighted and the frequency of re-balancing has important implications for long-term investors who hope to capture the out-sized returns that a few smaller firms that end up becoming mega-caps contribute. An equal weighted index, for example, is basically expressing the view that each of the top 100 tech companies has an equal chance in the long run of becoming that mega-cap giant. Unfortunately, if you continue to equal-weight a smaller tech company as it grows pass the median size and then goes on to become 10% of the market cap weighted index, after it exceeds 1% of the index, you will trail in terms of under-weighting that star company. On the other hand, a market-cap weighted index has different downsides. To the extent a few large firms may be extremely overvalued, you are not only going to suffer when this situation corrects, but you are going to contribute to the overvaluation along the way by being in a market-cap weighted fund. As we can see there is a lot to think about in terms of index weighting.

Next, we need to go over the time periods that are used in each re-balancing. The XNDX index that QQQ uses was last re-balanced based on the market values from the last trading day of August (closing prices). The next re-balancing, which occurs on December 21, will rely on market value changes occurring between August 31 and November 30. In the next few charts, we look at what this means for some of the largest index members (AAPL, AMZN,MSFT,GOOG, FB) as well as some other largish constituents that 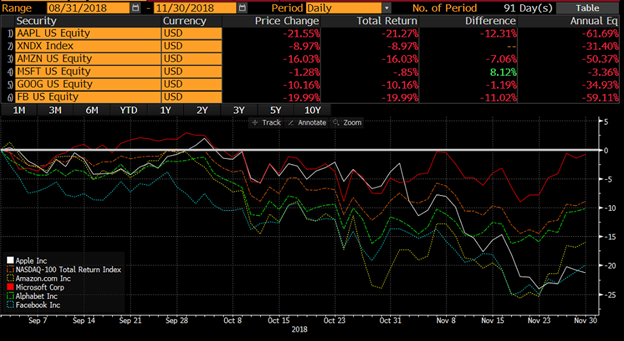 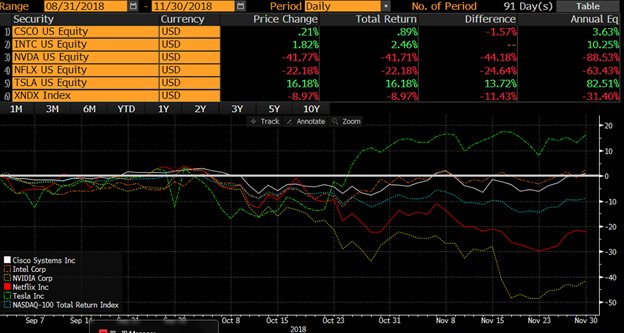 The relative movements of how each holding of the Nasdaq-100 index that we have looked at in the August 31-November 30 period will determine how their market-cap based weights will be adjusted in the reconstituted index. However, any additional movements that occur between December 1 and the index reconstitution date of Dec 21 (some of which could simply be momentum effects, but could also be positioning for the coming re-balancing) that continue relative performance trends, or potentially go further, could even be counteracted by rebalancing. 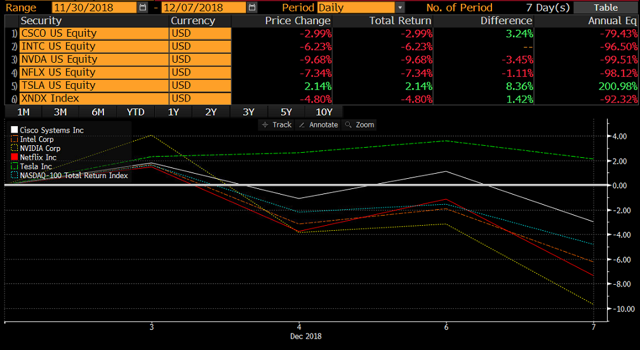 For example, in the re-balancing reference period, CSCO was actually up slightly in absolute terms and performed better than the index by over 9%. Since December 1, it is down about 3%, just a bit better than the index. Not taking any concentration-related rules into account, we would expect CSCO’s relative share of the index to be going up. This would result in some tailwinds in the last part of the year from a technical perspective, assuming that between now and December 21, no significant differences in relative performance have occurred.

The next table summarizes the likely impact, assuming that the trends started between December 1 and writing continue up to re-balancing day. 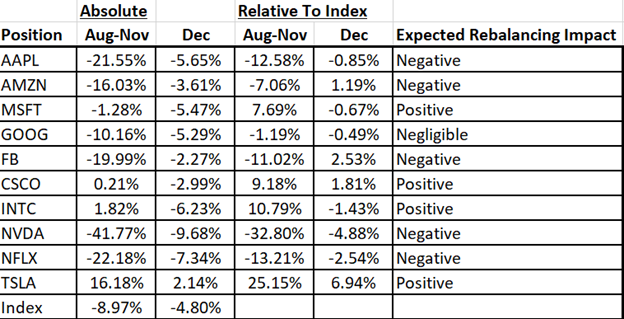 In general, holdings that decreased more than the index in the Aug-November period, and failed to continue that level of under-performance in December, will tend to experience negative impacts from re-balancing. This is the case with AAPL, AMZN, FB, NVDA and NFLX. On the other hand, holdings that did better than the index (such as MSFT) and especially ones that actually grew in Aug-Nov (such as CSCO, INTC and TSLA), but then began to fall in sympathy in December, will actually benefit, all else equal, from re-balancing. GOOG is the only one on the list which appears to largely be moving with the overall index in both periods and therefore re-balancing should be no material impact on its relative share of the index.

The potential contribution from re-balancing has been our focus so far. However, we need to consider overall market sentiment as reflected by technicals as well as fundamentals including many valuation metrics and how the correction so far has affected valuations to put the opportunity from re-balancing into perspective.

The next two charts from Bloomberg show that death crosses have been completed for both the broader market (S&P 500) and the Nasdaq 100. 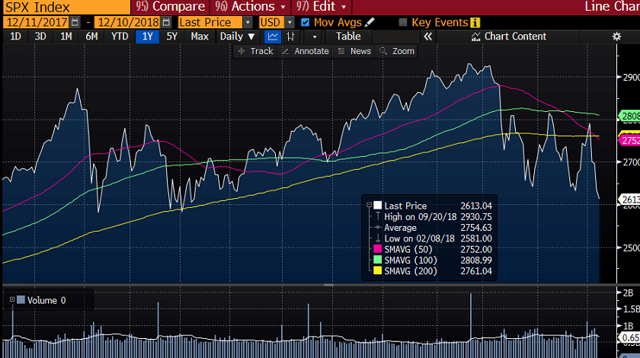 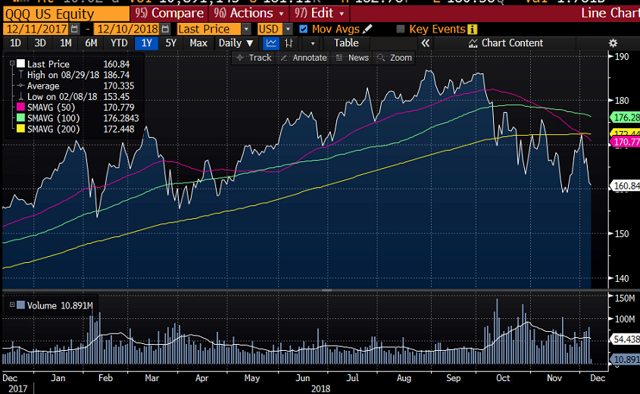 While a death cross is not a definitive sign of a coming bear market, it is to bear markets somewhat like what a semi-inverted yield curve (where a few portions of the curve become inverted) is to a recession. The conditional probability of having a bear market, given that one has seen a death cross, are considerably higher, than that of having a bear market in the absence of a death cross. While there are definitely false positives from reading death crosses, just as occasionally partial yield curve inversions are not followed by recessions, the odds are definitely more skewed in that direction. Folks who believe that market technicals are just so much "voodoo" (I used to be in this camp many years ago) might just want to view technicals as one lens through which people attempt to view the mysterious entity we think of as "market psychology".

Alternate, independent signs of market psychology might be the frequency of articles in major newspapers starting to talk about market weakness, articles trying to spin each weak economic number reported as part of a larger narrative heading towards an economic slowdown or the increased odds of a recession.

Meanwhile, how do broad valuation metrics look now after the corrections we had? 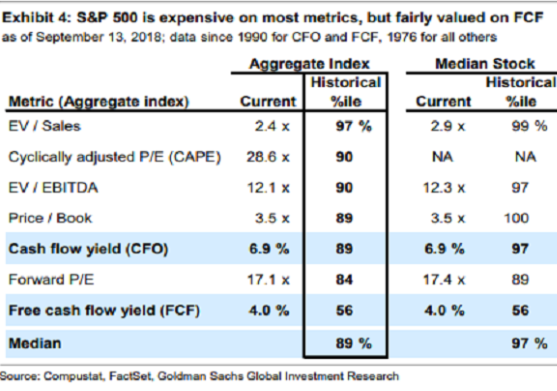 Of the eight valuation metrics GIR looked at above, seven are saying the market is still quite optimistically valued. The one outlier is free cash flow yield. This points to the fact that margins (which link all the other metrics to FCF) are quite high. Any margin deterioration would therefore put FCF in the same camp as the other metrics. This prospect is exactly what the market is fretting about. You will note that the above chart is about the S&P 500, while we have mostly been concerned with QQQ. 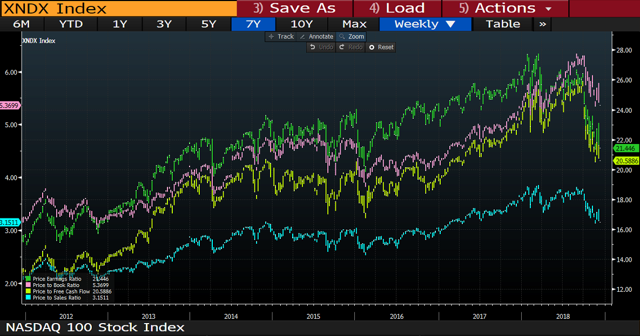 Our final graph look at P/E, P/B, P/FCF & P/S over time - regardless of how much looking at P/S might not tell you when comparing different companies that have highly different margins, surely looking at an index over a time period in which there could not have been a wholesale turnover in the types of firms making up the index has to tell you something. P/S remains closer to highs than the average in the post-crisis period. P/FCF and P/E have corrected to about early 2016 levels. P/B and P/S are elevated the most relative to the average, suggesting again that the disagreement has to do with margins going forward.

While I am currently agnostic on whether or not we enter a recession in 2019 (I think it partly depends on how badly the market does, and what the reverse wealth affect does to consumer psychology, which is very hard to model out in a world where 20% own most stocks, but they do consume about twice as much per capita than the rest of the population), all of the trends above combine to suggest to me that odds are better than 50/50 that we entered a bear market in October.

Several types of investors in QQQ or its holdings might attempt to use the re-balancing rules of the index. Most obviously, long-short investors or traders may wish to be longer names that show a positive tailwind in the table and shorter names that should see headwinds. Even long-only value investors looking for attractive entry-points into companies such as NVDA may benefit from using the information, however. For example, if your analysis shows that you'd be happy buying at the low 100s, you may wish to leave a little extra time to capture the benefits of any downdraft coming from bearish sentiment and re-balancing. Long-only investors need to get out of FOMO mode and consider that long-term gains on value are mostly earned by patience in periods when shares are being brutalized, not by hyping up names deep into an aging bull market or jumping in way too early. The old saying I was taught in bear market buying was "don't pull the trigger until you can see the whites of their eyes". In this case the whites of the eyes might refer to algorithms, but you get the point.

Long-Short Manager
1.39K Followers
I run two funds, one a diversified global income fund targeting about a 4-4.5% annual withdrawal rate for life, and a long-short aggressive fund that is a global cross asset class fund.
Follow

Disclosure: I am/we are short NFLX, NVDA, AMZN. I wrote this article myself, and it expresses my own opinions. I am not receiving compensation for it (other than from Seeking Alpha). I have no business relationship with any company whose stock is mentioned in this article.