When the Federal Reserve unleashed quantitative easing (QE) on the world, investors responded by searching for yield abroad. Foreign ownership of domestic bonds rose significantly across most major emerging markets. While foreign ownership has leveled off, the world may now be dealing with QE's unintended consequences. As foreign investors clip their coupons, this counts as an outflow within the balance of payments equation that must be offset elsewhere. Even if foreign investors never exit these emerging markets en masse, coupon clipping could serve as a drag on currencies for years to come.

To work our way through this, it helps to start with the United States. The net income line of the current account measures the income received by U.S. residents minus income paid to foreigners. This includes income and price appreciation from equities, bonds, and direct investments. The U.S. runs a net income surplus (Chart 1), meaning the U.S. makes more from its investment than what it pays out to foreign holders. You can see from the chart that this series really took off around 2010 when Americans ramped up their foreign purchases. 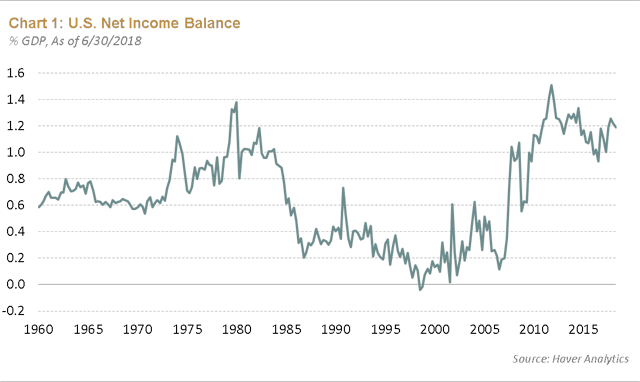 The flip side of every surplus is a deficit elsewhere. In this case, the deficits can be found in many emerging markets (EM). Let's use South Africa as an example. If you look at the goods and services lines in the current account the country is running a surplus, which reflects:

If you look at the income balance, the deficit is striking (Chart 2). South Africa has run persistent current account deficits over the last decade and 70% of those deficits have been due to the income component. The income component is a function of several things, but in the case of South Africa it's mostly attributable to foreign holdings of local currency debt. In other words, as U.S. investors clip and repatriate their South African government bond coupon, this translates into a significant demand for hard currency. 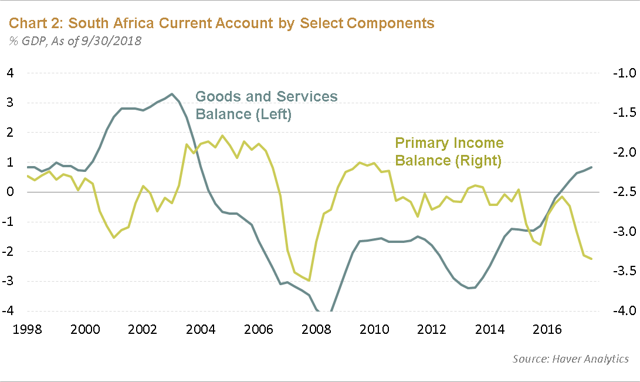 Markets are self-correcting mechanisms and there are a few ways this income imbalance currently present in many emerging markets (EMs) can be corrected over time:

We are positioned for mechanisms 1-3 which we expect to occur as a by-product of EMs that run responsible fiscal and monetary policies. Mechanisms 4-5 would correct the income imbalance as well, but likely at the expense of bond holder returns. For the income hurdle to be cleared, EMs need to re-engage in the development model that we saw prior to the global financial crisis. One would want to see a policy that leads to sustainably lower domestic rates, export competitiveness that takes advantage of cheap currencies, and higher growth performance that in turn boosts asset performance. These policies are self-reinforcing and can feed off each other, thereby creating a virtuous cycle that resolves the income deficit issue along with other obstacles.

Brandywine Global Investment Management
402 Followers
We believe in the power of value investing, looking beyond short-term, conventional thinking to pursue long-term value. Since 1986, our global experience has generated investment insights and a range of differentiated fixed income, equity, and alternative solutions. As an independent affiliate of Legg Mason, Brandywine Global offers the advantages of an investment boutique backed by the resources and infrastructure of one of the world's leading asset managers. With headquarters in Philadelphia and offices in London, Singapore, San Francisco, Toronto, and Montreal, we are committed to bringing value to all relationships. For important disclosure visit: goo.gl/TMjwf2
Follow
To ensure this doesn’t happen in the future, please enable Javascript and cookies in your browser.
Is this happening to you frequently? Please report it on our feedback forum.
If you have an ad-blocker enabled you may be blocked from proceeding. Please disable your ad-blocker and refresh.