Teresa May survived a no-confidence vote. But the drama is far from over. She is now a lame duck:

Mrs. May won the vote only after promising that she would step aside soon after the Brexit agonies were over, according to reports from a meeting of Conservative Party lawmakers preceding the vote.

May still lacks the votes to pass the Brexit plan. Compounding her problems is the EU's intransigence regarding renegotiations of the already-agreed-to deal. Uncertainty is starting to negatively affect business sentiment. Right now, the most likely scenario is that Parliament votes down the agreement leaving insufficient time to negotiate a new deal. Pulling back to the bigger picture, remember that recessions are usually started by a random economic event so large in their effect that it slows economic growth. Right now, it looks like the EU is hurtling toward such a date on March 29.

Adding to the bearish tone is the partial inversion of the yield curve:

The spread between the 5 and 2-year Treasury recently fell below 0. This is not a total curve inversion. But small sections of the curve usually invert before the larger curve does. While an argument can be made that due to quantitative easing the yield curve inversion has lost its predictive power, I still think the inversion is a good economic indicator.

The ECB voted to keep rates at their current level. Although the bank noted some economic weakness, they offered a more or less positive assessment of the EU economy [emphasis added]:

Euro area real GDP increased by 0.2%, quarter on quarter, in the third quarter of 2018, following growth of 0.4% in the previous two quarters. The latest data and survey results have been weaker than expected, reflecting a diminishing contribution from external demand and some country and sector-specific factors. While some of these factors are likely to unwind, this may suggest some slower growth momentum ahead. At the same time, domestic demand, also backed by our accommodative monetary policy stance, continues to underpin the economic expansion in the euro area. The strength of the labour market, as reflected in ongoing employment gains and rising wages, still supports private consumption. Moreover, business investment is benefiting from domestic demand, favourable financing conditions and improving balance sheets. Residential investment remains robust. In addition, the expansion in global activity is still expected to continue, supporting euro area exports, although at a slower pace.

A fairly good counter-argument exists to the above "glass half full" tone. The pace of annual GDP growth has been declining for four quarters; the unemployment rate has been stalled at 8.1% for the last four months; data from Markit economics has been weakening; core inflation is still stuck around 1%; the German economy contracted in the third quarter. An even better argument can be made that the data is evenly weighted right now.

Let's turn to the performance table:

The larger cap indexes were treading water. The smaller caps all dropped. And the transports led the way lower, falling 1.61%. Blame Delta, which announced lower-than-expected earnings for 2019, which hurt the whole airline sector.

Utilities and staples were the top performers. Real estate continues to benefit from a more dovish interest rate environment. At the bottom of the list are basic materials, which continue to underperform due to the lateness of the cycle and trade issues. The flattening yield curve is hurting financials. It's concerning to see staple down this close to the holiday season.

Yesterday, I noted that the markets are hanging on precariously, with the SPYs right above the lower-end of their 260-280 trading range. They continued to trade in that range today: 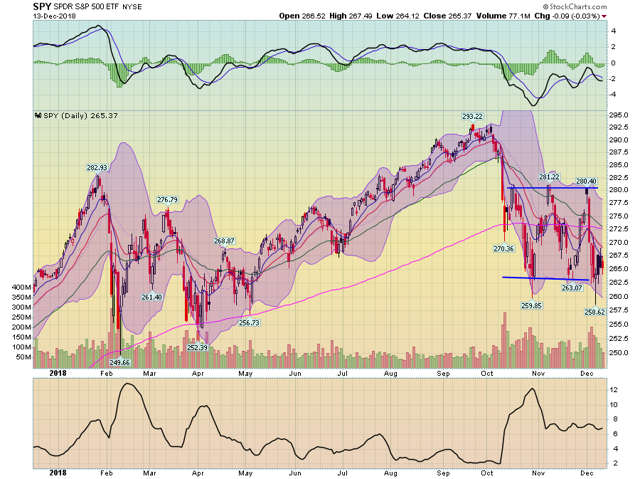 The problem for the markets is that small-cap indexes are moving lower: 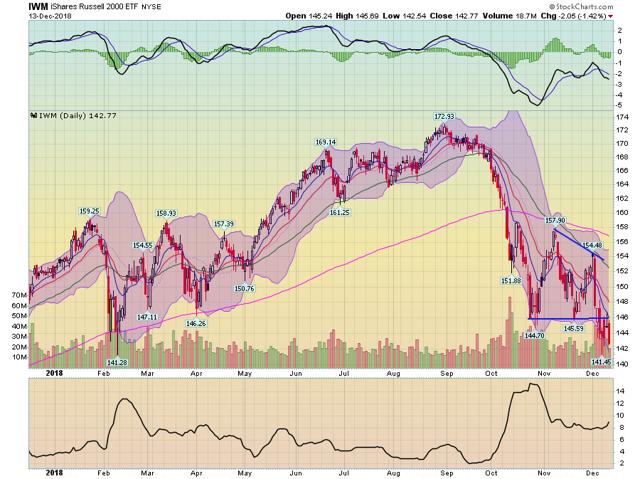 The IWM broke through support in the mid-140s and continues to trade below that level. Also, note that all the shorter EMAs are below the 200-day EMA. Volatility is higher and momentum is weak. This is a chart that wants to move lower. 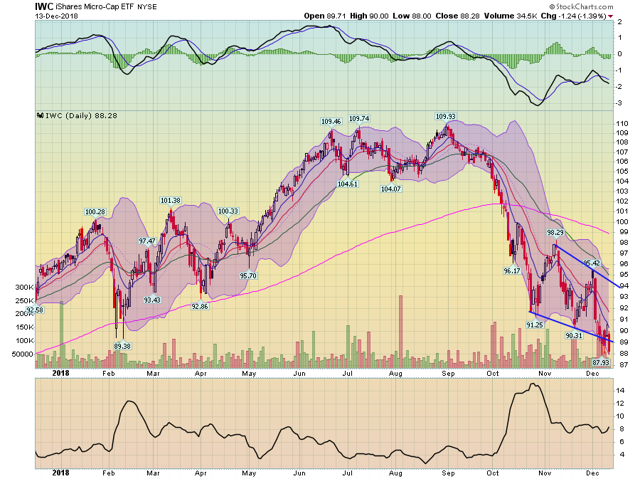 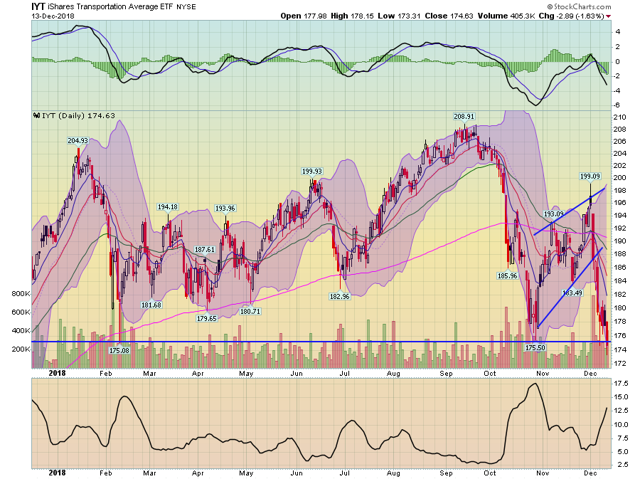 Transports are right at lows for the year.

Tomorrow we get retail sales and industrial production -- two key coincidental numbers. So far, these numbers have been positive. But with the market hanging on a knife-edge, a miss will probably send us lower still.