An estimate of financial stress in US financial markets edged up last week to the highest level since April 2016, based on the St. Louis Fed Financial Stress Index (STLFSI). Although the benchmark remains well below zero, which implies a below-average level of stress, the steady rise in recent months suggests that financial conditions are on a path of becoming less favorable for markets and the economy in 2019.

STLFSI is compiled from 18 weekly data sets, reflecting a broad set of market signals, including interest rates and yield spreads. The current reading for the week through Dec. 7 remains far below a level that signals a warning for markets and the economy. Nonetheless, it's notable that this gauge has increased to a range previously reached in early 2016, when the US economy was struggling with considerably stronger macro headwinds. 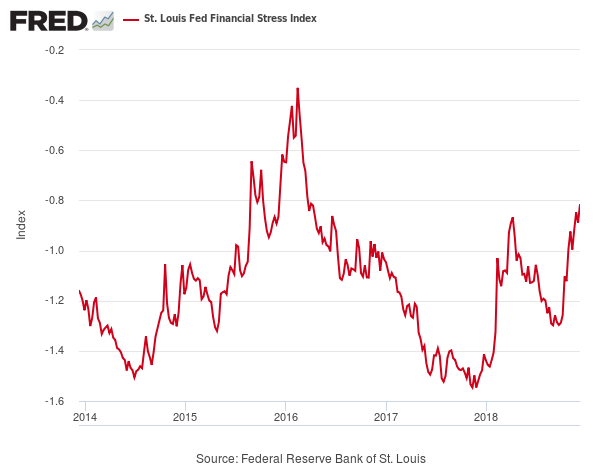 Current US economic conditions are stronger by comparison, although there are signs that growth is slowing. The Atlanta Fed's GDPNow model, for instance, is projecting (as of Dec. 7) that GDP in the fourth quarter will decelerate to a 2.4% gain. If correct, the expansion's pace will slow for a second quarter in a row.

A 2%-plus rise in output is strong enough to keep forward momentum healthy, but if we see confirmation that GDP's rise slowing will off one more clue for concluding that US growth has peaked - an outlook that's been discussed on these pages for several months (see here and here, for instance). Given that backdrop, monitoring various risk metrics, such as STLFSI, deserves a higher priority from here on out.

For additional context, today's upcoming November reports on retail sales and industrial production offer fresh perspective on the big-picture outlook. On both fronts, The Capital Spectator's expecting mildly softer year-over-year changes, based on point forecasts via the average of combined estimates using eight modeling applications (see charts below). If today's results confirm the projections, the rising level of financial market stress warrants closer attention in the weeks ahead as a possible early warning sign that the US economy faces a more challenging environment in 2019. 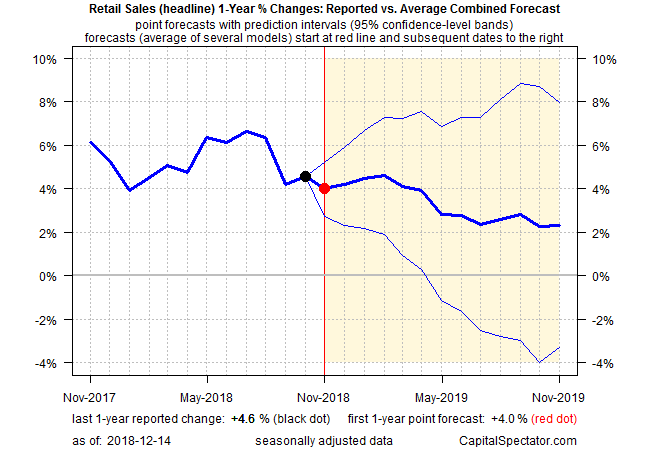 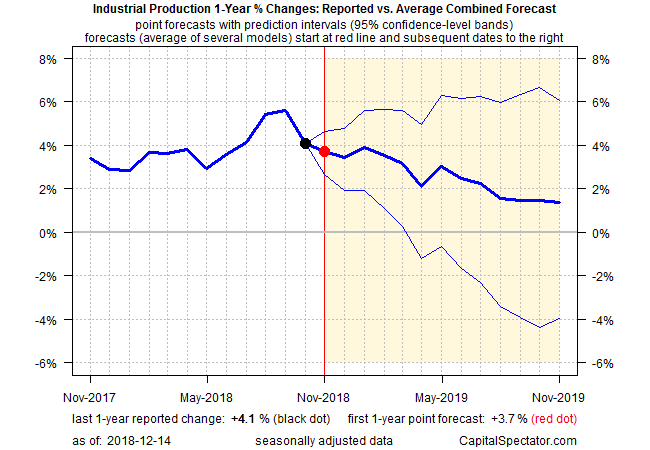 James Picerno
5.61K Followers
James Picerno is a financial journalist who has been writing about finance and investment theory for more than twenty years. He writes for trade magazines read by financial professionals and financial advisers. Over the years, he’s written for the Wall Street Journal, Barron’s, Bloomberg Markets, Mutual Funds, Modern Maturity, Investment Advisor, Reuters, and his popular finance blog, The CapitalSpectator. Visit: The Capital Spectator (www.capitalspectator.com)
Follow