Almost two years ago (1/12/17), I published a note on ship lessor Global Ship Lease (NYSE:GSL), at which time I stated:

If the notes aren't in your wheelhouse and you are looking at the preferred, I will simply opine as follows: Global Ship Lease is a solid little containership company. The problem is that it is just that, a little containership company. One slip-up and it could slide between the waves. The numbers supporting the preferred are enviable (for shippers at least) and the company should continue to meet its obligations in the near to intermediate term, but could continue to be pressured by the macro-supply issues and the re-deliveries over the next year or so. Ultimately, GSL preferreds should not be overweighted at these prices, but the yield and fundamentals make them somewhat attractive.

So how did it work out?

From a price perspective: 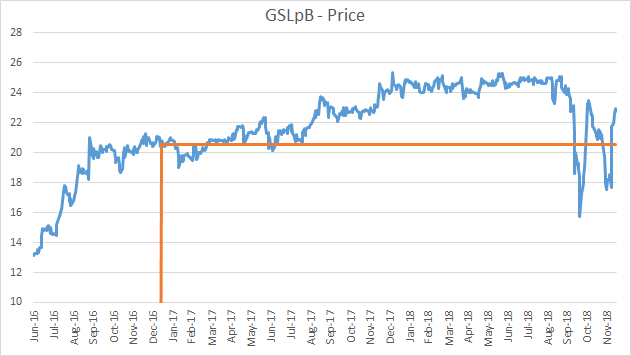 From a stripped yield perspective: 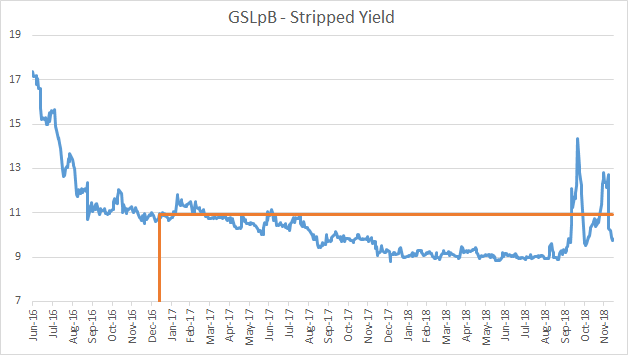 At the time of the recommendation, the shares were trading at $20.65 stripped price with a stripped yield of 10.57%. Shares did well, and it was smooth sailing with tidy gains and cash flow. Rough seas lately, but holders are in better shape now than at the date of the recommendation (+8.47% period and 4.2% annualized on a stripped price basis), and they have picked up a 10% yield for their trouble.

That was then; this is now. Should holders continue holding? First, a look at the publicly traded (in the US) containership lessors:

Global Ship Lease is significantly smaller than peers Costamare (NYSE:CMRE) and Seaspan (SSW) and has a higher leverage.

With these factors in mind, a look at the preferred stock available from these lessors is in order. The outstanding preferred, and baby bonds from Seaspan, currently have the following profile:

As the table above shows, an investor can potentially pick yield and take out points (however small) by trading into preferred stock of the larger players. Of these, I would choose CMRE's Series D (CMRE.PD) as an investor will pick 30bps and take out approximately $0.75. Going into SSW Series E (SSW.PE) will give 30 bps and take out $0.40.

Let me note that I am long CMRE, CMRE Series C, and SSW Series H. While my preferreds in CMRE and SSW are not the "optimal" preferreds, I bought them lower and have tax implications in a swap, but I am looking at both.

In order to give some context to the capital structure pricing, the following table shows the relationship between the preferred stripped yield and the common dividend yield. In this space, the preferred stock provides a yield advantage due to the lack of upside (but better price stability). 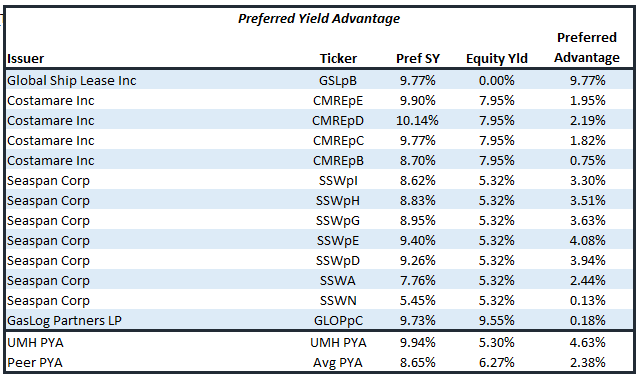 As I am now focused on the CMRE preferred, a look at this versus the GSL preferred.

First, a look at the size difference (as measured by market cap) between Costamare and Global Ship Lease: 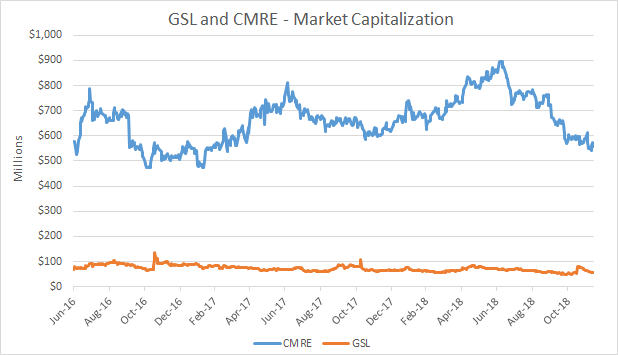 The swap is into a much larger company (not that it always makes a difference, but it can have a bearing on the outcome).

The following chart shows the price of the CMREpD and GSLpB. Note the volatility in the GSL and the current recovery in prices. 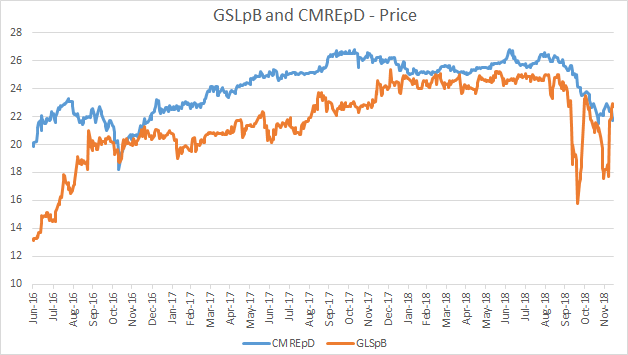 As they are both in the same industry (and have roughly similar fleets in terms of TEU/ship), it is logical that the preferred prices will follow each other generally due to systemic influences. Recently, GSL has consummated a merger with Poseidon Containers, which has increased its fleet (in terms of size and quality), which has contributed to the volatility.

The following chart shows the difference between the stripped yield of GSLpB and CMREpD; note that it has turned negative for the first time since 2016. 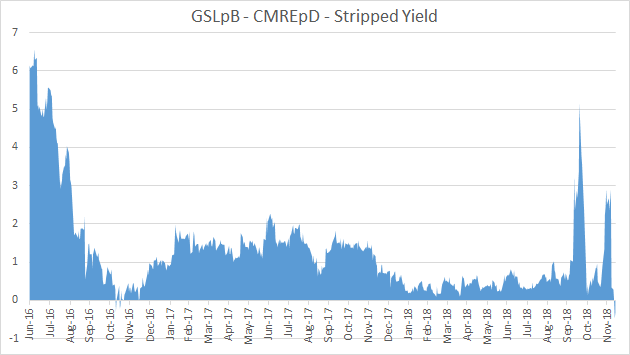 It is also worth noting that CMREpB has far greater liquidity (on average) than GSLpB: 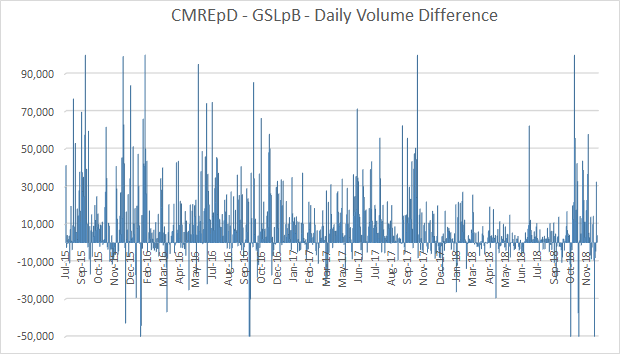 Bottom Line: While GSL has done "okay", I recommend investors swap out of GSLpB into CMREpD for the following reasons:

Further, it should be noted that with the consummation of the merger, GSL has announced a consent solicitation on its 9.875% First Priority Secured Notes due 2022, which will allow the company to pay dividend on its equity sooner than is currently allowed:

The Proposed Amendments would amend the Indenture to bring forward the date beginning on which the Company is permitted to pay dividends to common shareholders in an aggregate amount per year equal to 50% of the consolidated net profit after taxes of the Company for the preceding financial year to January 1, 2020 (rather than January 1, 2021), and include an acknowledgement by holders of the Notes that the transactions (the "Poseidon Transactions") contemplated by the Agreement and Plan of Merger dated October 29, 2018 by and among the Company, Poseidon Containers Holdings LLC, K&T Marine LLC and the other parties thereto do not constitute a Change of Control (as defined in the Indenture) under the Indenture.

Pulling forward its ability to pay dividend will ultimately not be in the interest of the preferred holders as it increases the cash outflow of the company (although preferreds are paid first).

Rubicon Associates
5.57K Followers
Rubicon Associates is headed by a Chartered Financial Analyst charter holder with over 20 years of experience in the investment management industry focused on the analysis, investment and management of fixed income and preferred stock portfolios. Over the years, he has analyzed and invested in both public and private companies around the world as well as advised institutional clients on fixed income strategies and manager selection. The principal has been responsible for managing nearly seven billion dollars in credit investments across the capital structure and overseeing the research and trading of credit market activities. Rubicon Associates has written for Seeking Alpha, Learn Bonds, a newsletter and TheStreet.com in addition to advising institutional and private investors.
Follow

Disclosure: I am/we are long CMRE, CMRE.PC, SSW.PH. I wrote this article myself, and it expresses my own opinions. I am not receiving compensation for it (other than from Seeking Alpha). I have no business relationship with any company whose stock is mentioned in this article.