Europe's financial markets are already in considerable retreat and so is the economic growth outlook, here is City AM:

"The “yellow vest” protests in France and ongoing weak car demand exacerbated a widespread economic slowdown, IHS Markit’s purchasing managers’ index (PMI) showed this morning. The index’s eurozone composite PMI showed that business growth fell to 51.3 in December, down from 52.7 last month and the lowest since November 2014. The euro fell against the dollar from 1.135 at 8am to 1.129 after the news. Output growth experienced a “near-stalling” in the month, while new export orders fell for the third month in a row, at its steepest decline in four years. Job creation sank to a two-year low as the low number of new orders put firms off hiring, while business optimism collapsed."

And stocks aren't faring any better, from Investing.com: 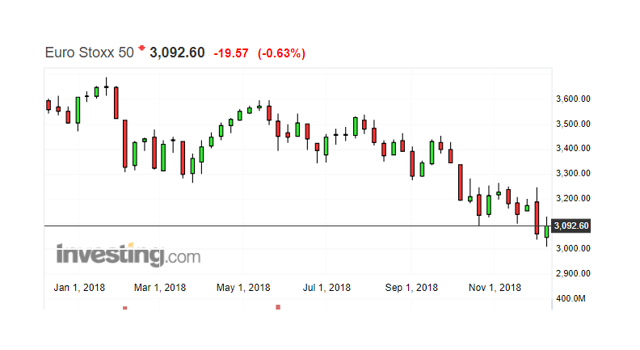 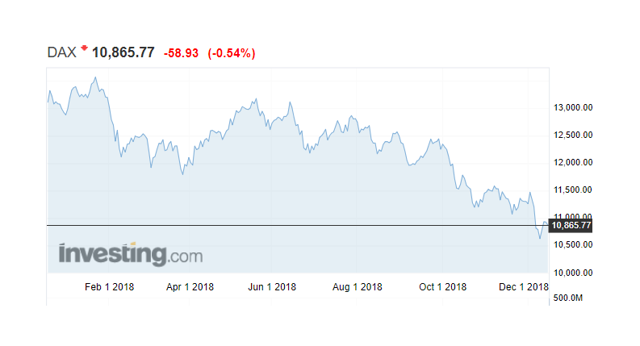 The prospect of sensible market reforms reviving growth have dimmed with a populist government in Italy and a revolt in France.

On top of this, the euro remains a potentially explosive device that is likely to detonate when economic circumstances worsen further. Can anything be done to revive the prospects of economies and investors?

Europe has enjoyed a few relatively calm years helped by large scale ECB asset purchases, negative interest rates and a benign world economy. But not all is well, in the words of former Greek finance Minster Yannis Varoufakis:

Last year, there seemed to be a bit of a respite when populists in the Netherlands and France lost, and Macron emerged as a fresh new centrist Tony Blair, ready to reform France and the eurozone.

Macron's intentions were the right ones, injecting necessary reforms in France and a (rather modest) program to repair some of the eurozone fault lines, but both have gone nowhere.

It is curious that people elected a reformist President but then revolt at the reforms, but this is what happened. After some of the worst riots since 1968, the President had to backtrack and buy the protesters off with some 10B euro of concessions.

In a way it is difficult to explain the intensity of the revolt to the American public because wage stagnation is a much more recent phenomenon in France, compared to the US, where no revolt is in sight.

But one could argue that it is just because French workers were accustomed to things getting better until the last decade or so that has produced this revolt. 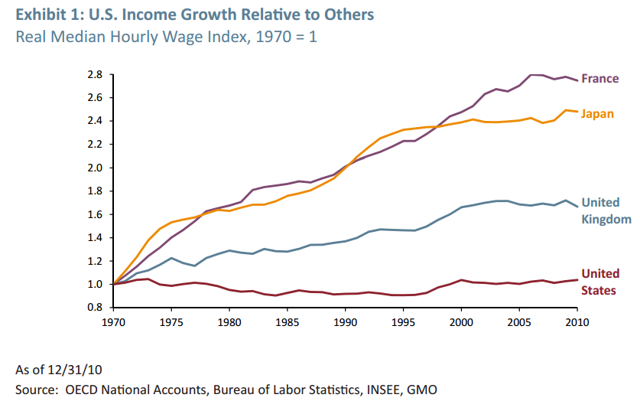 Earlier reforms in Italy had hit their limits when the political center broke down and a curious left/right populist coalition came to power on a mix of a flat tax, a basic income, and scrapping earlier pension reforms, a package Italy clearly can't afford with a public debt/GDP ratio of 132%.

To a substantial part, Europe's woes are the result of the euro, one of the most ill-thought out and destructive policy changes ever implemented.

The creation of the euro caused capital to move from center to the periphery, creating asset bubbles (Ireland, Spain), fake improvements in public finances (Italy, Portugal, Greece) and inflation, eroding competitiveness from which most of these countries haven't recovered.

These countries couldn't devalue their currencies anymore and were forced to 'internal devaluation', a slow-grinding process of recouping competitiveness. The resulting slow or negative growth worsened public finances.

This injected a deflationary bias in the whole eurozone as the burden of adjustment was all put on the periphery without any compensating reflation in the core countries.

There is a second eurozone problem which is the tendency to create escalating crisis through a series of self-reinforcing feedback loops (bond market selloff worsening public finances, bank balances and leading to capital flight, reinforcing the selloff).

We have described this on numerous occasions, but with the Italian government blinking first in its budget fight with the eurozone, the immediate prospects of that have dimmed a bit.

Now, in principle, these problems can be solved, but they require things like some form of debt mutualization and/or fiscal union, a common bank insurance or other automatic transfer policies that involve (much) more, not less EU, a political non-starter.

Hence, things are simmering until the next economic downturn when they will almost surely come to a head once again. The euro is one of the most intractable and potentially dangerous time bombs out there, in our view.

That you don't even need to be in the euro to create widespread anti-EU sentiment is witnessed by Brexit, a seemingly futile and self-destructive process.

The simple fact is that the EU is by far the UK's main trading partner and that trade is going to suffer outside the common market and customs union, whatever the precise arrangement exactly is.

That economic hit might very well be compounded by the resulting uncertainty over what exactly these arrangements will be post-Brexit (if that actually happens), and then there is the time necessary to negotiate trade deals with much of the rest of the world, which will take a decade or more.

If things are already unraveling during economic tailwinds and outside the eurozone, watch what happens when those winds turn, as they surely will at some point.

While the euro problem remains intractable, what is necessary is some kind of perspective that might boost economic growth and pull voters away from radical solutions that are unlikely to help.

Varoufakis, who we quoted at the beginning of the article, also noted something else directly following that quote (our emphasis):

"Europe is weighed down by overgrown, quasi-insolvent banks, fiscally stressed states, irate German savers crushed by negative interest rates, and whole populations immersed in permanent depression: these are all symptoms of a decade-long financial crisis that has produced a mountain of savings sitting alongside a mountain of debts."

And he's right, Europe isn't just a mountain of debt, it's also a mountain of savings, and at least to some extent these are two sides of the same coin:

This is simply the result of all the burden of adjustment (for misaligned trade balances) falling on the deficit countries, there is no pressure on the surplus countries to reflate.

The eurozone has actually been similar to the oil shock of the 1970s, which created a huge pool of excess savings in OPEC countries that had to be recycled.

This doesn't happen automatically, but if some of these excess savings in the center can be activated to spur economic growth, that would mitigate the deflationary bias of the eurozone.

We tend to think that this would be politically most palatable with some kind of obligation of surplus countries to reflate if their trade surplus exceeds some percentage of GDP (say 5%).

At least they can choose how to reflate and keep most of the spoils even though the resulting growth impulse will seep through the rest of the eurozone, making their adjustment burden a little easier.

Varoufakis has another idea:

Personally, we think one of the best ways to spend money is in support of fundamental research, that is, broad based, multi-purpose technologies. Both theory and experience show that the returns on this are enormous:

Just as an illustration, take Apple (AAPL) (from Slate):

"Apple is a perfect example. In its early stages, the company received government cash support via a $500,000 small-business investment company grant. And every technology that makes the iPhone a smartphone owes its vision and funding to the state: the Internet, GPS, touch-screen displays, and even the voice-activated smartphone assistant Siri all received state cash. The U.S. Defense Advanced Research Projects Agency bankrolled the Internet, and the CIA and the military funded GPS."

The problem with this is that there is little or no immediate return on this kind of investment, so we should be looking for something with society wide benefits and considerable visibility.

The author of the above quote on Apple is Maria Mazzucato, director of University College London's Institute for Innovation and Public Purpose, and she has written a new book on so called Moonshots, Apollo-like projects that are both highly visible and have wide benefits, from Science and Business:

"Many ideas are doing the rounds: Turning 100 cities carbon neutral by 2030; cutting the amount of plastics discharged into the seas by 90 per cent; reducing the rate of progression of dementia by 50 per cent; building new satellites and surveillance technology to reduce the number of deaths of migrants crossing the Mediterranean. Mazzucato offers the first moon landing, which was 49 years ago, as the archetypal mission; the effort enlisted many sectors of science to solve a difficult list of problems.

“Getting to the moon was not just aeronautics – it was also textiles that had to innovate. You couldn’t go there in jeans and a t-shirt,” she said. “About 13 or 14 sectors had to be involved. Projects: there were hundreds, some of which failed.” Similarly, taking plastics out of the ocean would require the chemical industry, biotech, marine life specialists, social innovation and artificial intelligence, Mazzucato said."

As usual, the problem is money. These projects are roughly $10B in size, here is Politico:

"The first ideas for missions are expected to be put forward in the fall, the Commission said. Up to €10 billion could be up for grabs by 2027."

Now, while Varoufakis' idea of 500B euro of EIB bonds would enable a dramatic escalation in size and ambition, it's doubtful there is even the absorption capacity to deal with such a wall of money.

The problem is still that this isn't likely to deliver returns fast, but with large sums of money involved, it is at least visible and imaginative, infusing the EU with a new sense of purpose that could increase its legitimacy.

And it doesn't really cost any tax money.

Growth is slowing down substantially, equities are close to, or already in a bear market, and the political disintegration is well underway even when there were still considerable economic tailwinds.

Now that the hope for sensible market reforms in France (and mild eurozone reforms) have stranded, it seems to be time for something more imaginative to stop the rot, a sensible European populism.

One of these plans is developed by Varoufakis, and it is indeed imaginative. It combines large investments with some form of solution of the asymmetric adjustment problem that has hobbled the eurozone for a decade.

We like to see it combined with the idea of Moonshots. We know from the post-war US experience that the returns on these kind of projects can be enormous, even if they take a long time to materialize in full.

While that is a problem, the visibility and relevance of these projects could inject a sense of purpose into ailing EU institutions. Investors aren't helped by further disintegration and uncertainty.