Four of the ten top yield MoPay stocks (shaded in the chart above) were verified as being among the Top ten gainers for the coming year based on analyst 1 year target prices. Thus the yield-based strategy for this MoPay group as graded by analyst estimates for this month proved 40% accurate.

Projections based on estimated dividend amounts from $1000 invested in each of the ten highest yielding stocks and the one year analyst median target prices for those stocks, as reported by YCharts, made the data points. Note: one year target prices from one analyst were not applied (n/a). Ten probable profit-generating trades to 2019 were:

Crescent Point Energy Corp (CPG) netted $921.52 based on a median target estimate from seventeen analysts, plus estimated annual dividends less broker fees. The Beta number showed this estimate subject to volatility 41% more than the market as a whole.

Vermilion Energy Inc (VET) was forecast to net $681.81 based a median target estimate from fifteen analysts, plus estimated annual dividends less broker fees. less broker fees. The Beta number showed this estimate subject to volatility 18% less than the market as a whole.

Great Elm Capital Corp (GECC) netted $528.25 based on a median target price estimates from three analysts, plus dividends less broker fees. A beta number was not available for GECC.

Avianca Holdings SA (AVH) was forecast to net $508.02 based on mean target price estimates from seven analysts plus dividends less broker fees. The Beta number showed this estimate subject to volatility 33% less than the market as a whole.

Capitala Finance Corp (CPTA) netted $440.91, based on dividend, plus a median target price estimate from seven analysts less broker fees. The Beta number showed this estimate subject to volatility 7% less than the market as a whole.

Global Net Lease Inc (GNL) netted $374.14, based on dividend plus mean target price estimates from three analysts less broker fees. The Beta number showed this estimate subject to volatility 50% less than the market as a whole.

Solar Senior Capital (SUNS) netted $228.26 based on the median of target estimates from three analysts, plus dividends less broker fees. The Beta number showed this estimate subject to volatility 45% less than the market as a whole.

Harvest Capital Credit Corp (HCAP) netted $223.53 based on a mean target estimate from three analysts, plus estimated annual dividends less broker fees. The Beta number showed this estimate subject to volatility 26% less than the market as a whole.

PennantPark Floating Rate (PFLT) netted $218.17 based on a median of target price estimates from six dividend less broker fees. The Beta number showed this estimate subject to volatility 50% less than the market as a whole.

Gladstone Investment (GLAD) netted $175.95 based on dividends plus the median of annual price estimates from four analysts less broker fees. The Beta number showed this estimate subject to volatility 40% less than the market as a whole.

Average net gain in dividend and price was 43% on $1k invested in each of these ten MoPay stocks. This gain estimate was subject to average volatility 33% less than the market as a whole. 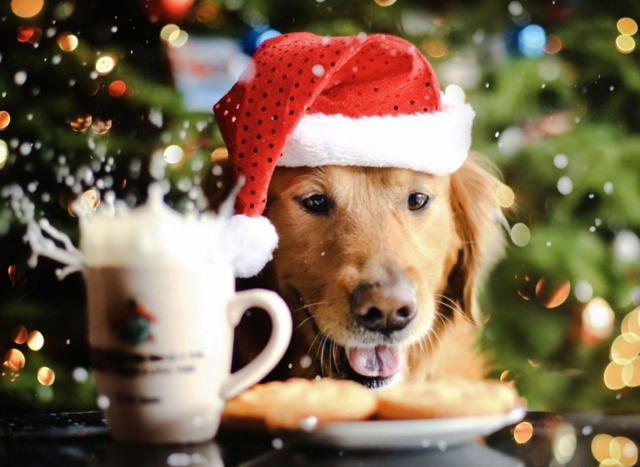 Stocks earned the "dog" moniker by exhibiting three traits: (1) paying reliable, repeating dividends, (2) their prices fell to where (3) yield (dividend/price) grew higher than their peers. Thus, the highest yielding stocks in any collection became known as "dogs." More specifically, these are, in fact, best called "underdogs".

Quarterly, Semi-Annual and Annual dividend investors anxiously await announcements from a firm, fund, or brokerage to learn if their next dividend will be higher, lower, or paid at all.

Monthly pay stocks, funds, trusts, and partnerships inform the holder every four and one third weeks by check and/or statement. If the entity reduces or suspends a payment, the holder can sell out of the investment immediately to cut future losses.

This advantage has been curtailed when companies suddenly cut monthly dividends to save cash. Three prominent MoPay firms declared dividend cuts between December 2016 and March 2017.

For the past year, Tahoe Resources (TAHO) has skipped its monthly payouts and dropped as a MoPay resource.

Top yield stock for October 2016, Orchid Island Capital (ORC), released this cautionary note with its monthly dividend announcements: "The Company has not established a minimum distribution payment level and is not assured of its ability to make distributions to stockholders in the future." ORC directors proceeded to back-up their words with actions cutting the dividend from $0.14 to $0.11 in February 2018, to $0.09 in March, and to $0.08 for September.

The U.S. MoPay segment is volatile and transitive. More over-the-counter trades in monthly pay equities are available from Canadian firms.

"[A] problem with this analysis is you are comparing companies of VERY different varieties. REITs pay no taxes and their distributions are classified as ordinary income and thus not subject to the 15% or 20% tax rate. MLPs also pay little no taxes at the corporate level, but instead have "distributions"... Comparing REITs, MLPs and regular corporations thus requires a financial analysis...not include[d]." --arbtrdr

"[Y]ou list a few issues here whose distributions are rife with RETURN OF CAPTAL [ROC] at its most destructive form, funds that pay you back your own money each and every month in their distributions with no regard to what they truly earn...- these should not be included in any list containing the word "dividend". --NYer1

"I can enter or exit a position and still reap dividends for at least 2/3s of the quarter. They also smooth the income stream so I have cash at any given time to make a purchase at dips." --Ed Invests

"Dividend dog investing really works well for income in my experience. I have been seriously invested in dogs the more unloved the better." --Urbannek

"...Nice to see another contrarian strategy. This one seems to take a lot of attention in comparison [to Dow dogs], but I like the monthly rebalance." --colodude

"At this level of risk, I'm only buying monthly dividend payers. Dividend if cut only [sits] for a month and not a quarter." --Sinjjn Smythe

"Some of us are comfortable investing in Dog stocks because we feel the reward is worth the risk. As long as [my sin stock] continues to pay and raise the dividend like it has for 16 years now, it will have a spot in my portfolio." --Miz Magic DiviDogs

"One thing to point out: These stocks are not buy & hold. If you buy any of these stocks, set a price where you will sell... trailing stops work real good & with mopays you can get out & get back in without losing a whole quarter of dividends..." --drking

"I don't know how many times I've kicked myself for not investing in a beaten down group only to find it spring back up months later." --User 13258352

List One: 86 US Monthly Pay Dividend Equities by Yield 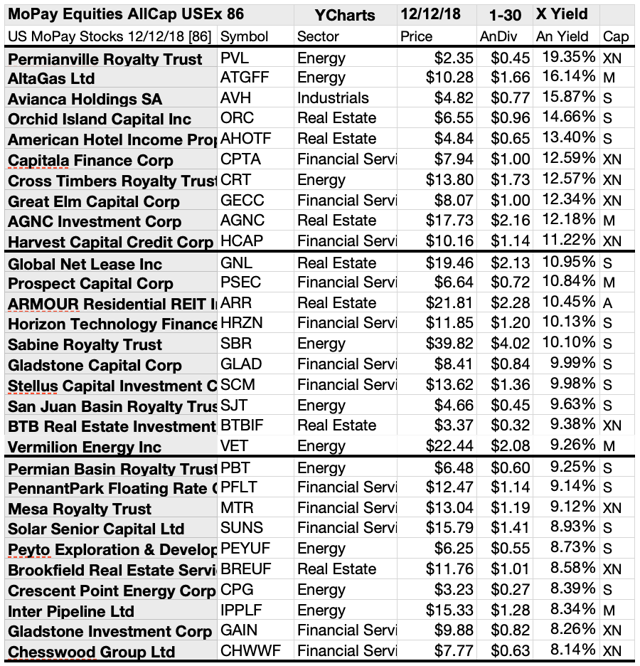 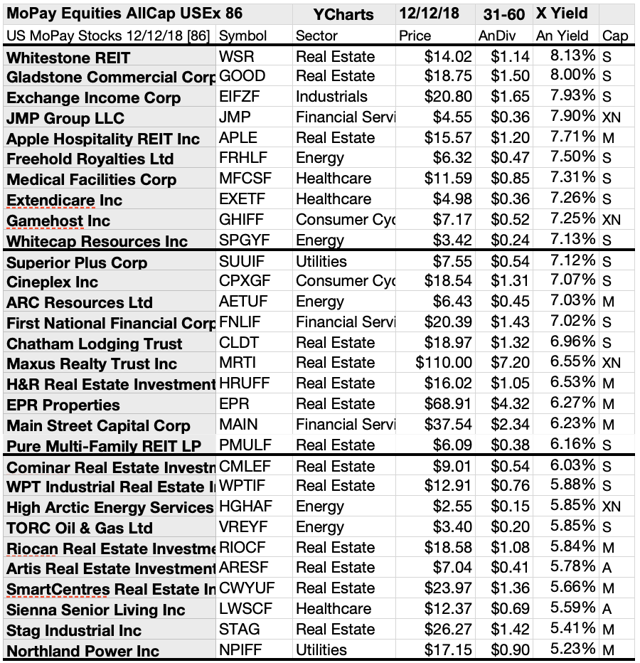 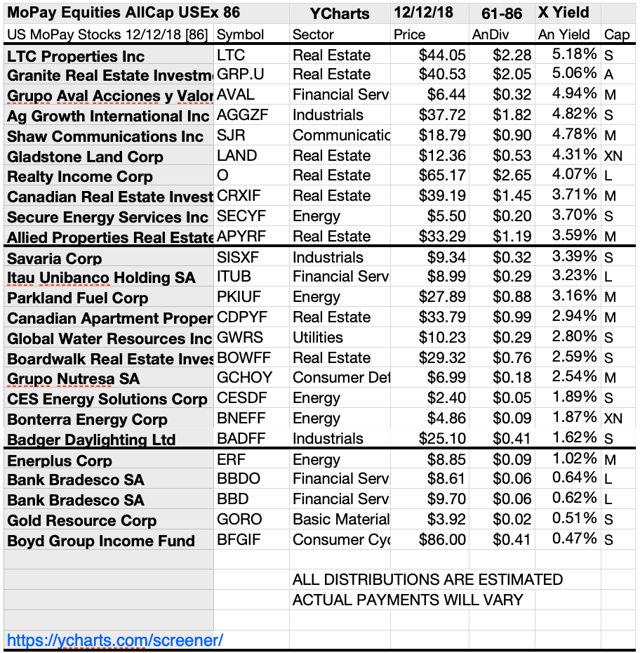 Top ten of these US exchange listed monthly pay dividend equities showing the best yields into December represented four of the eleven Morningstar market sectors, with representative firms split 3 to 1 to 3 to 3 between the energy, industrials, real estate, and financial services sectors. 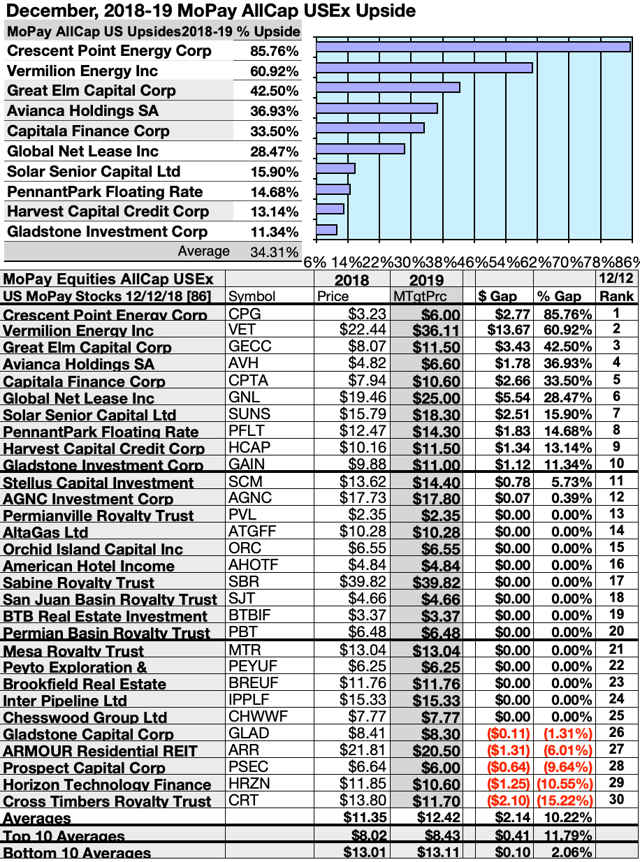 The results shown below from YCharts for MoPay dividend stocks as of market closing price December 12 were paired with analyst mean target prices one year out. Eight top stocks displayed 11.34% to 85.76% price upsides for the next year based on analyst 1 yr. targets.

Price upside, of course, was defined as the difference between the current price and analyst target one-year median price targets for each stock.

Those ten MoPay stocks showing the highest upside price potential into 2019 were gleaned from 30 selected by yield. Three to nine analysts have historically provided the most accurate mean target price estimates. 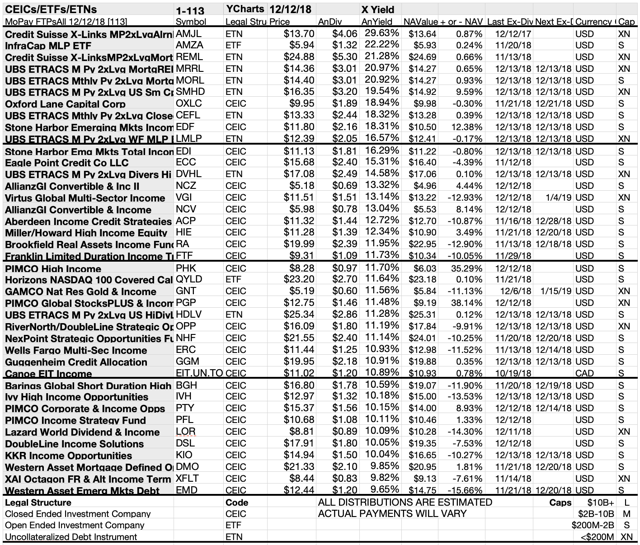 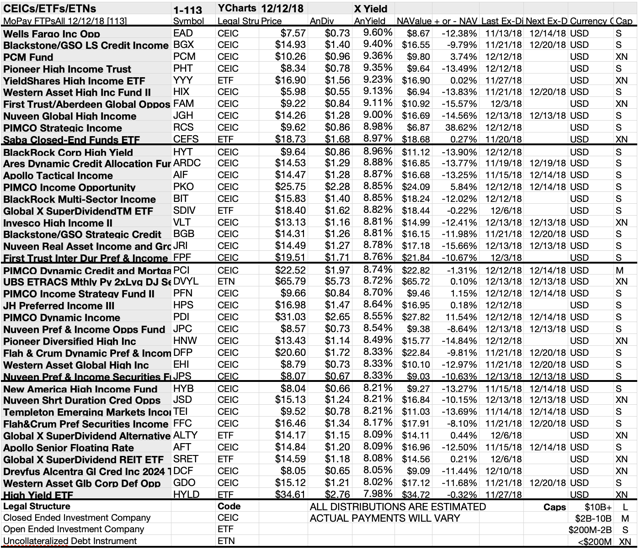 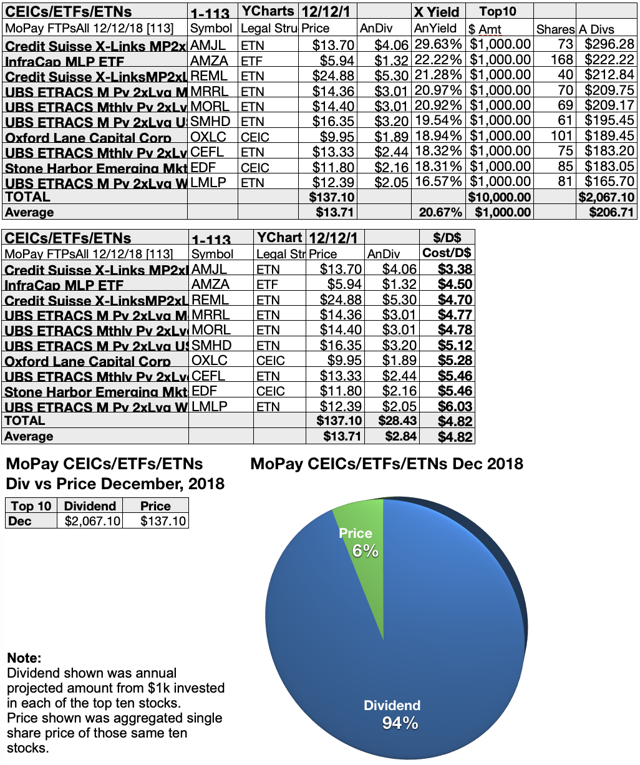 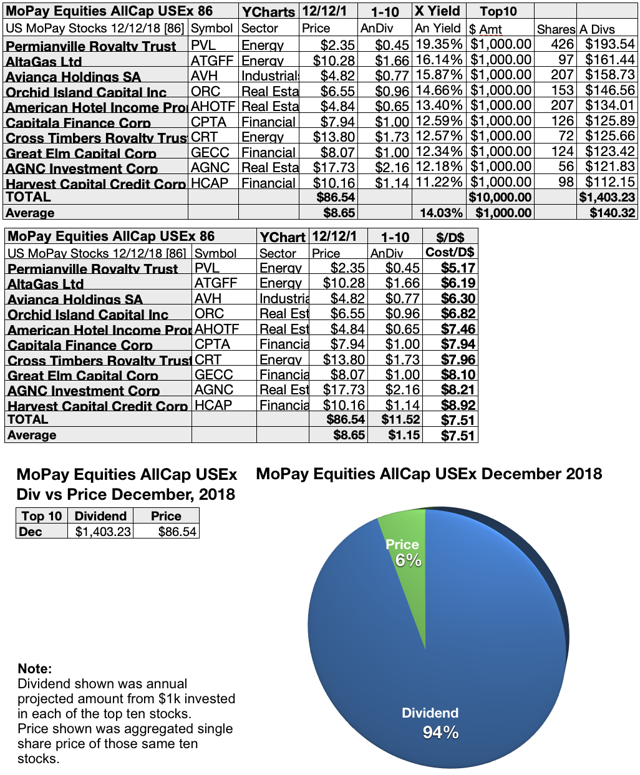 Note that the top ten equity dividends are now equally percentaged with those of the top ten funds. This is a new variation in the dividend dog kennel.

Since June 2012 reader suggestions to include funds, trusts, and partnerships, a list of MoPay equities to buy and hold in September 2012 resulted from those reader suggestions supplemented with a high yield collection from here. That list was supplemented by an upside potential article in October and a upside vs. buy & hold in November. Another list factored December 2012 reader comments.

Ten monthly pay stock equities were ranked by yield. Those results, verified by YCharts and YahooFinance, produced the following charts.

$5000 invested as $1k in each of the five Lowest priced stocks of the top ten MoPay dividend dog kennel by yield were predicted by analyst 1 year targets to deliver 26.57% more net gain than $5,000 invested as $.5k in all ten. The fourth lowest priced MoPay dividend dog, Orchid Island Capital Inc (ORC), was predicted to deliver the best net gain of 52.85%. 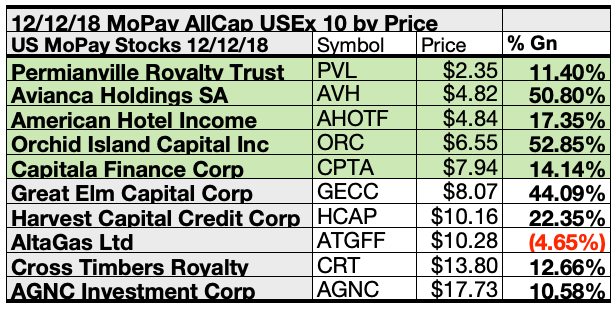 This distinction between five low priced dividend dogs and the general field of ten reflects the "basic method" Michael B. O'Higgins employed for beating the Dow. The same technique, you now see, can also be used to find some rewarding dogs in the MoPay Stock kennel.

The added scale of projected gains based on analyst targets contributed a unique element of "market sentiment" gauging upside potential. It provided a here and now equivalent of waiting a year to find out what might happen in the market. Its also the work analysts got paid big bucks to do.

Gains/declines as reported do not factor-in any tax problems resulting from dividend, profit, or return of capital distributions. Consult your tax advisor regarding the source and consequences of "dividends" from any investment.

Stocks listed above were suggested only as decent starting points for your MoPay dividend stock purchase or sale research process. These were not recommendations.

Disclaimer: This article is for informational and educational purposes only and should not be construed to constitute investment advice. Nothing contained herein shall constitute a solicitation, recommendation or endorsement to buy or sell any security. Prices and returns on equities in this article except as noted are listed without consideration of fees, commissions, taxes, penalties, or interest payable due to purchasing, holding, or selling same.

At 8:45 AM every NYSE trading day on Facebook/Dividend Dog Catcher, Fredrik Arnold does a video summary of a candidate for his new Ivy portfolio in his Underdog Daily Dividend Show!

Always remember: Root for the Underdog. Comment on any stock ticker to make it eligible for my next FA follower report.