One of the traits which characterizes most stock market corrections is a bottom, followed by a sharp rally, then a final low which may or may not take the indices to a lower level. In the event the initial low is violated, the final decline of the correction can be frightening. This is the pattern we’re seeing now as the stock market correction which began in October enters its final climactic decline. Today we’ll examine the attributes of the market as we try to discern how far down the S&P 500 Index (SPY) will plunge before the ultimate bottom is confirmed.

Throughout the stock market decline of the last 2-½ months, it has been my contention that this has been simply a “correction” of an ongoing bull market. I’ve based this conclusion on a couple of major factors, including a strong corporate earnings and revenue growth trend, abundant liquidity, and favorable credit spreads. The fact that there was a specific fear catalyst to the October sell-off in stocks - namely fear over rising interest rates - is another reason for believing this to be a bull market correction and not the start of a new bear market. In most cases, bear markets begin with no specific reason for the initial decline in the major averages. When there is a definite fear behind the decline, investors are generally safe in assuming the “wall of worry” - an essential component of any bull market - is still intact.

While there are many reasons for assuming the bull still lives, there’s no denying that the bears have complete control over the market’s short-term trend. For weeks on end, there has been no letup in internal selling pressure which has plagued this market since September. This is reflected in the unhealthy amount of 52-week lows on both major exchanges. In the latest sessions, for instance, there were 577 new lows on the NYSE compared with only 16 new highs. The high:low ratio on the Nasdaq was similarly negative. The following graph illustrates the danger posed by the rising trend in stocks making new lows.

The steady selling pressure in a handful of rate-sensitive sectors has been enough to undermine the near-term strength of the entire stock market. This is why I haven’t been able to recommend initiating new purchases in individual stocks and ETFs despite the strong fundamental and economic backdrop to this market. A lack of internal strength is a danger signal for the short-term trend, and right now that trend remains weak. This tells us that the correction isn’t over yet and likely has further to go on the downside before it ends.

Just how far will the SPX and other indices fall before the final low is in? The magnitude of a decline is always open to conjecture and can never be known with consistent precision. But given the internal weakness discussed above, it’s a safe bet that Friday’s (Dec. 14) sell-off which broke the recent low in the SPX was the start of another decline. There are reasons, however, for believing this will be the final decline of the October-December correction. Let’s look at some them.

One sign that the coming days will likely see climactic selling is suggested by the following graph. This shows the 3-year progression of the PHLX/KBW Bank Index (BKX), a benchmark measurement of the major U.S. bank stocks. Last week’s comprehensive decline caused the BKX to test a long-term benchmark chart “support” zone just below the 90.00 level. This chart benchmark can be seen below and extends from December 2016 to the present. 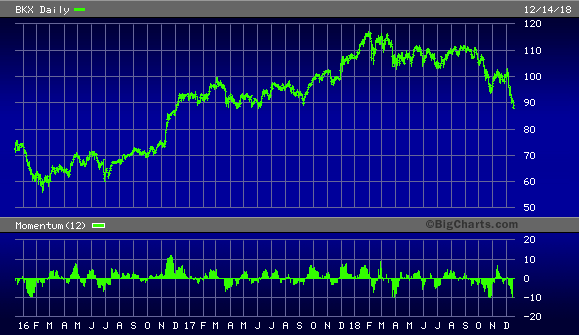 While there is nothing inherently magical about a chart support level, the fact that the 88.00-90.00 area has served to reverse several declines in BKX in the last two years is significant. It’s probable that this benchmark area represents a rather large concentration of stop losses in the individual bank stocks which comprise the index. The latest decline in BKX to the 88.00 level has undoubtedly triggered many stops and will also likely encourage additional short selling in the bank stocks. When there is a rapid run on the stops and a surge in short interest in an industry group as sensitive as the banks, a short-covering rally can’t be far behind.

When we combine the deteriorating investor sentiment profile toward the bank stocks with that of the overall broad market, it provides an even bigger possibility for a sharp plunge in the major averages to be followed by an equally sharp recoil rally. Sentiment as measured by the American Association of Individual Investors (AAII) provides one such clue that investor psychology is ripe for a short-term trend reversal.

Only one important indication that sentiment has reached the capitulation stage has been missing lately. I’m referring to the lack of a sharp spike in fear as measured by the popular volatility gauges. My favorite fear gauge, the CBOE S&P 100 Volatility Index (VXO), measured the volatility of large cap stocks and has been surprisingly subdued since its initial rise in October. Notice that investor fear as reflected by the VXO is nowhere near as high as it was during the early February market decline. Accordingly, we should witness a final spike higher in VXO in the next few days to let us know the final correction bottom has been established. Given how investor sentiment has rapidly worsened since last week, we can reasonably expect to see a volatility spike in the coming week.

A final consideration which points to the end being near to the selling pressure is the oversold nature of this market. As measured by the 20-day price oscillator for the S&P 500 Index, the stock market is fast reaching a sold out condition and is technically vulnerable to a "bull raid." As of Dec. 14, the 20-day oscillator has reached one of its lowest (and most oversold) levels of the past year. What's more, this important gauge of the stock market's near-term internal condition has established a series of higher lows in recent weeks (see arrow below). This is in contrast to the lower lows recently made by the S&P 500 Index and is a positive technical divergence. Internal divergences like this one often occur immediately prior to market bottoms. 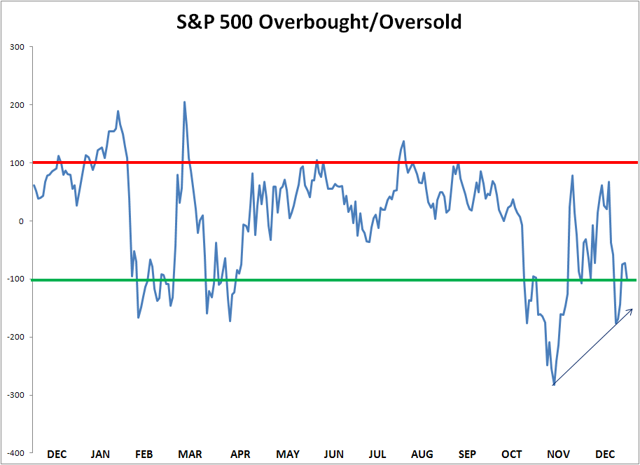 Until the final low is confirmed, investors should remain on the defensive as the stock market’s short-term technical profile is still very weak. For this reason I don’t recommend initiating any new long positions in stocks and ETFs right now. However, I anticipate that the latest global market-related fears will soon pass and that equity prices will then resume their upward path. On a strategic note, investors can maintain longer-term investment positions to the stock market via ETFs and outperforming individual stocks in strong sectors. This especially includes the consumer staples sector, my favorite group which has shown relative strength versus the S&P 500 Index in recent months. With earnings growth still on a positive trajectory, the probability is strong that the large cap major averages will continue to trend higher in the coming six months.

Disclosure: I am/we are long XLP. I wrote this article myself, and it expresses my own opinions. I am not receiving compensation for it (other than from Seeking Alpha). I have no business relationship with any company whose stock is mentioned in this article.