These last 12 months have been rough for a stock market that has been battered by trade wars, rising interest rates, Brexit and other international craziness, legal wranglings, natural disasters, rising volatility, political shenanigans, and sources say, a horrific outbreak of rockin' pneumonia and the boogie-woogie flu.

Nevertheless, it's been another interesting and successful year for the Dividend Growth 50, which outperformed the market in Year 4 of its existence.

The portfolio also outperformed the market in its second year. The VOO position does have the edge on the DG50 for the entire 4-year run, however, thanks to a bullish economy during that stretch.

I am well aware that most of my fellow Dividend Growth Investing practitioners strive to build a reliable, ever-increasing income stream. Part 2 of this series, which will be published in early January, will focus on the DG50's income growth.

Still, many (like me) do want to see the overall value of their portfolios grow, and that's why I take an annual look at the DG50's total return on each anniversary date.

Although 3M (MMM) has done fine so far, it has not been one of the portfolio's biggest winners. For those, we look at 3 other M's: Microsoft (MSFT), McDonald's (MCD), and McCormick (MKC).

The Dividend Growth 50's positions in the tech giant, the fast-food empire and the spice king each more than tripled the S&P 500's gain during the portfolio's first four years.

Microsoft, roundly criticized earlier this decade as a fading "old technology" behemoth, has been on a tear ever since Satya Nadella replaced Steve Ballmer as CEO in 2014. Nadella has ushered in numerous changes to Mr. Softy's business model, most notably focusing on its Azure cloud services.

The DG50 has benefited handsomely from Microsoft's revival, with its stake growing 152.5% over these four years. MSFT is one of only two DG50 components to register a double-digit gain in each year of the portfolio's existence.

McDonald's, another company supposedly in trouble due to changing times - in its case, a focus on healthy eating - has seen a 126.5% gain since the Dividend Growth 50 was launched. Obviously, Donald Trump isn't the only person who still likes to chow down on Big Macs.

In the fall of 2014, motivated by an article I had written about the Nifty Fifty of the 1970s, I asked 10 fellow Seeking Alpha contributors to choose 50 companies each for a new list that I hoped would be even niftier.

About two months later, on Dec. 16, 2014, I funded the portfolio, investing about $500 in each company. I renamed it the Dividend Growth 50, which more accurately reflects what the portfolio represents.

It has turned out to be one of the most popular fixtures on Seeking Alpha, with the original article and numerous updates receiving hundreds of thousands of page views and generating tens of thousands of comments. Panelist Eric Landis has compiled all the articles on his DGI For The DYI blog.

Importantly, neither the panelists nor I have ever suggested that investors replicate this portfolio. The idea has been to present candidates for consideration and further research, as well as to discuss the concepts of DGI and portfolio-building.

Without further ado, here is the total-return data for every company in the Dividend Growth 50 (listed in order of 4-year performance): 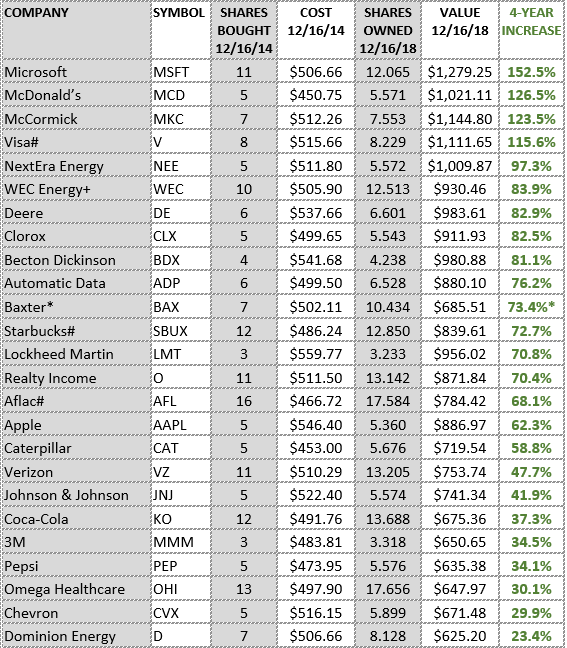 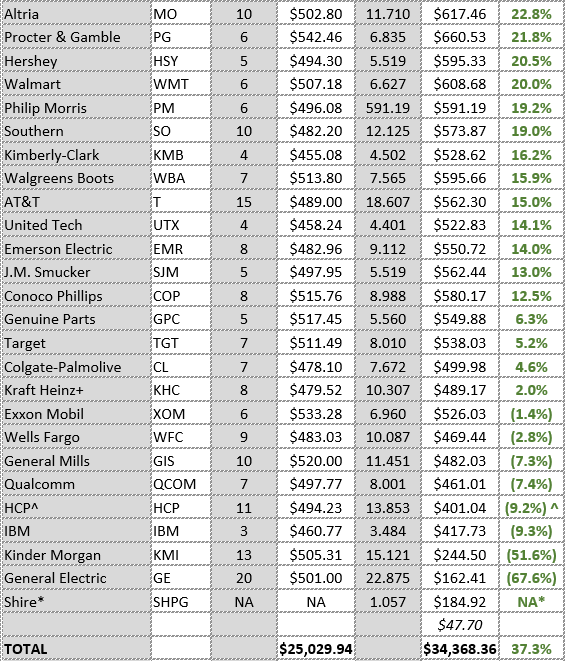 Johnson & Johnson (JNJ) declined 10% last Friday after Reuters published a report about asbestos in talc (a report the company calls "one-sided, false and inflammatory"). Had the DG50's birthday come the previous day, JNJ would have shown a 57.7% gain these last four years; the position nonetheless eked out a total-return "victory" over the S&P 500. 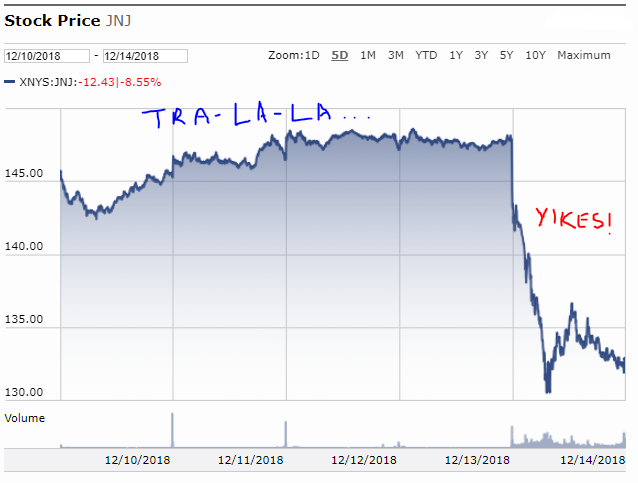 JNJ has faced allegations and litigation in the past and has always recovered, but this latest episode - where one day shareholders are singing a happy tune, and the next day they're gasping for air - does show that no stock is truly "safe." In investing (as in life), stuff happens.

Although Industrials did well, they were brought down by GE (GE), which fell nearly 60% as it has been beset by poor management, high debt, and multiple dividend cuts. Others with struggling business models and/or operations include Kraft Heinz, Wells Fargo (WFC), General Mills (GIS) and IBM (IBM). And Kinder Morgan has been hurting ever since the DG50 was born.

Shire, which became the portfolio's 51st company after buying up Baxter's biopharm spin-off Baxalta, is in the process of being taken over by Japan's Takeda Pharmaceutical (TKPYY). It's not yet known how that will affect the Dividend Growth 50.

I thought it might be interesting and instructive to look at each position's annual total return these last 48 months. Companies are listed in order of the most recent year's performance: 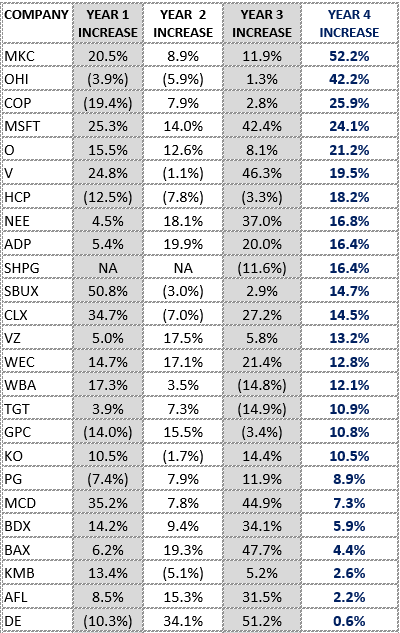 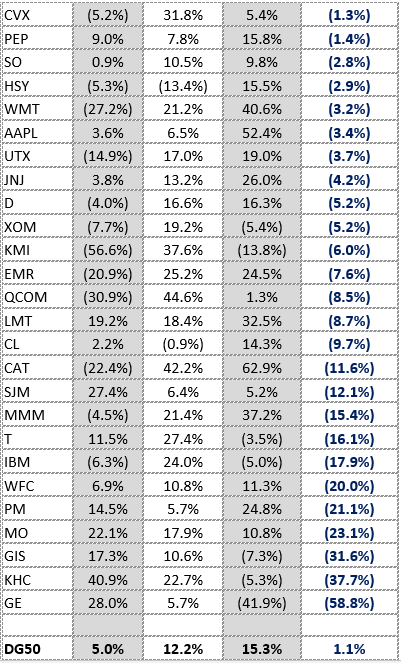 MSFT and WEC were the only positions to record double-digit growth in total return every year; WEC was boosted by an extra share being bought with cash that had entered the portfolio through corporate activities. Nine others experienced gains all four years: MKC, O, NEE, ADP, VZ, MCD, BDX, BAX, AFL.

Of those 11, the company whose consistent outperformance surprised me most was Realty Income, which had to overcome a couple of fairly steep pullbacks related chiefly to concerns about Fed rate hikes. Throw in O's ever-growing dividend, and one can see why a triple-net REIT that bills itself as The Monthly Dividend Company is so popular with DGI practitioners.

Fellow REIT Omega Healthcare (OHI) had a major comeback. In advancing 42.2%, OHI finished second only to MKC among year-over-year gainers. It was a vast departure from its poor total-return picture over the DG50's first three years: losses of 3.9% and 5.9%, and a gain of 1.3%. 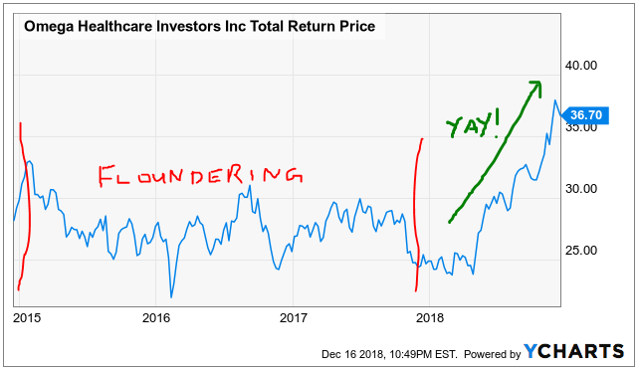 HCP, another health REIT, also finally had a solid 12 months after three losing years. the DG50's position in the stock benefited from its spin-off and ultimate sale of its faltering QCP property.

SBUX, WBA, TGT, and GPC rallied with double-digit gains this past year after underperforming the previous 12 months.

On the downside ... GE ... Oy! What else can I say when a 41.9% loss is followed by a 58.8% decline? I'm glad I sold GE long ago from my personal portfolio, but the DG50 is a passive, buy-and-hold project that aims to see how a group of stocks perform over a decade or more.

The steady downward progression of AT&T (T), General Mills and Kraft Heinz - former DG50 darlings that have become major drags on the portfolio - is also a bummer.

Some companies that have historically performed well had their first down years as DG50 components: PEP, SO, JNJ, AAPL, LMT, SJM, WFC, MO and PM.

The presence of the latter two cigarette makers on the "loser list" was especially notable because Altria and Philip Morris have been staples of DGI portfolios for eons. Threatened regulations and/or litigation involving traditional tobacco products and e-cigarettes have weighed down share prices. As you'll see in Part 2, however, their dividends continue to ascend.

In a bull market, a portfolio of "boring," dividend-focused stocks usually can be expected to underperform. That was especially the case in Year 3, thanks in great part to Mr. Market's anticipation of a major corporate tax cut.

While the DG50 bested VOO and VIG in two of the years and came close a third time, it lagged behind VDIGX three out of the four years. Vanguard's impressive dividend-based mutual fund has been around since 1992, and it's an option for those who want to own DGI-type companies but don't want to deal with individual stocks.

This is my fourth annual review... and for the fourth time, I will say that not enough time has gone by to conclude much of anything about the Dividend Growth 50's comparative total return. This is a long-term project, one I plan to keep going for at least another decade, and DGI is a long-term strategy.

I am quite satisfied with this portfolio's gains during a historic bull run, and what we've seen over these last 12 months tells me the DG50 is likely to outperform the overall market if the bear starts clawing at returns.

So for now, please join me in celebrating Birthday No. 4 for the Dividend Growth 50. And I'll see y'all in a couple of weeks with the annual income report.

Mike Nadel
15.13K Followers
"Do you know the only thing that gives me pleasure? It's to see my dividends coming in." - John D. RockefellerWell, a FEW other things give me pleasure, but I get where he was coming from.+++I manage two real-money portfolios at DividendsAndIncome.com:++ Income Builder Portfolio: https://dividendsandincome.com/income-builder-portfolio/++ Growth & Income Portfolio: https://dividendsandincome.com/mike-nadels-grand-twins-college-fund/
Follow

Disclosure: I am/we are long ALL DG50 COMPANIES. I wrote this article myself, and it expresses my own opinions. I am not receiving compensation for it (other than from Seeking Alpha). I have no business relationship with any company whose stock is mentioned in this article.

232 Comments
To ensure this doesn’t happen in the future, please enable Javascript and cookies in your browser.
Is this happening to you frequently? Please report it on our feedback forum.
If you have an ad-blocker enabled you may be blocked from proceeding. Please disable your ad-blocker and refresh.