Bitcoin is literally worth nothing

Bitcoin (BTC-USD) has no chance of success because it's worthless. It has nothing backing it but an illusion; no gold or silver or even a decree that it's legal tender. It has no intrinsic value and no one needs it.

Bitcoin doesn't actually have any intrinsic value of any sort backing it - only vague assertions of its potential usefulness in the future. Your currency is only worth what other people believe it's worth and I'll present a few reasons why Bitcoin will never be generally agreed upon as something of worth.

It's valued by its supporters for a few abilities of Blockchain technology; for example about a third of its purchasers said they bought it to avoid government regulation (Source). However with the government currently looking very hard at ways to regulate it (SEC Chairman Jay Clayton recently noted that every initial coin offering he's seen qualifies as a security), 84% of respondents to a recent poll (Source) wanting regulation for ICOs, and in the same poll 68% wanting ongoing regulation - I believe it's most likely only a matter of time before the government starts enacting broader regulations and deteriorating the reason that a third of its purchasers bought it for.

It's defined currently as a commodity by the SEC (Source). Commodities have a value of some sort. Gold, oil, cattle, and corn all have an intrinsic value in that they're useful for something and, broadly speaking, people from all over the world will buy them. Bitcoin does not have this intrinsic value. It cannot be eaten, refined into gasoline and plastic, or even used as jewelry.

By the by, the Blockchain tech behind it is very interesting and has a number of potential uses but this article isn't about the tech itself - it's about why Bitcoin is fundamentally worthless.

According to a May 2018 poll (Source) despite 96% of US investors having heard of Bitcoin only 2% own it and 76% have no interest in ever buying it. The reasons why are pretty clear.

Firstly 75% of them labeled it "very risky." Any serious investor is going to severely limit his or her exposure to anything they believe is "very risky." This strongly limits the total capital available to the Bitcoin market as nearly 60% of Bitcoin's owners are under 34 years old (Source) and younger people have less to spend.

Beyond just a reputation as a poor investment it involves a significant change in technology. With technology comes additional fears as to its uses. In a survey done by Foley and Lardner (Source) it shows 71% of people believe there is a "strong" or "very strong" risk of hacking and theft of their cryptocurrency. I don't know if there is or not - but people certainly believe that there is that risk.

Also, Bitcoin was designed as a currency. If it isn't somewhat stable then it's useless as a currency. Its wide fluctuations mean that it's impossible to be certain of how much money you'll have tomorrow. With the USD of course there's inflation, but it's at such a low rate you won't need to be cognizant of it on a daily or even monthly basis. Also the rate at which you can transfer USD into Bitcoin makes this fluctuation all the more apparent. It takes several days in some circumstances to purchase Bitcoin online - during which time your purchase may have lost significant value.

It will never achieve widespread adoption

For Bitcoin to be worth something it would - at the least - need widespread adoption. I would need to be able to go down to Costco and pay for something in Bitcoin. I would need to be able to pull out a card and swipe it in a machine anywhere without any worries of how long it's going to take my $8 purchase to get verified by the miners or at what fees.

Right now its adoption is very limited. True, it is becoming more accepted online with a number of retailers (Source) starting to take it. However its usefulness in brick and mortar locations is extremely limited (Source). Take a look at that map I just linked and you'll see that very few places actually take it. I looked through Denver, near where I live, and mostly it's just ATMs and listings for online businesses that take it.

It will never achieve any widespread real world adoption because of its technological barriers to usage and lack of agreed upon value. The same things that its supporters bought it for are what will keep it from being successful. Currencies that are perceived (see above) as being extremely open to any sort of hacking or theft will not be adopted en masse as corporations look to limit their exposure to data breaches. Furthermore business owners will be squeamish on taking currency that may be worth significantly less by the time it's actually in their accounts as USD. And that's what they want - USD, so why add a middleman?

Bitcoin also cannot conduct business in the absence of electricity and internet connection. These things happen rarely in modern countries but cash and credit cards can still be used to transact (granted cards get ran when the power turns back on - but I can still get all of the details and if I have a phone line then I can run it over the phone) when my Wi-Fi is offline. Can't do any of that with BTC so it behooves everyone to continue to transact in USD.

If it's worthless then why did it spike to $20k?

Hype is the only reason it went up. Just like the South Sea Co. (a story worth reading for any investor) investors were promised something that can't be delivered and they bought it. In this case they were promised a currency that is unregulated by the US Government and will actually be usable. As I've argued above this simply isn't the case with Bitcoin.

Article after article was published screaming that Bitcoin is going to $100k. Most people tend to buy when the market's going up and sell when it's going down which is completely backwards. The hype simply snowballed on itself and pushed the price up in a speculative bubble.

Let's take a look at BTC's chart and see what we see. Although my article is about the fundamentals of Bitcoin a technical look is always interesting. Below you'll see an all-time chart to get an idea of where it's at today in case you're not familiar with its history. This also gives us a pretty good perspective of the bubble in price. 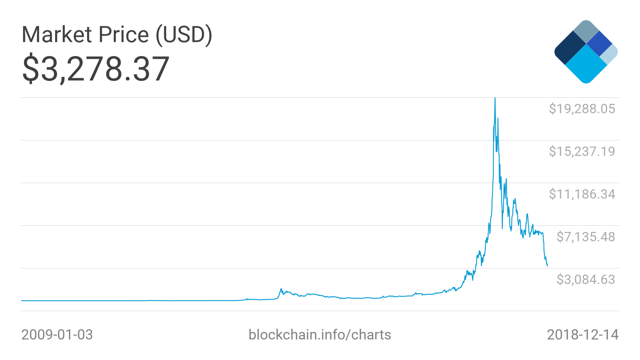 We can tell from this chart that the ~$20k price was an obvious aberration and a reasonable technical analyst cannot expect it to return to that price. The move upwards was far over a sustainable 45-degree angle and would never remain there. Furthermore based on its previous history the spike could be reasonably interpreted as an extremely overbought condition.

And here's a zoomed in chart of the past two years.

We can see it's in an obvious downtrend, with a descending triangle and bearish breakout. The downtrend has an overall ~45-degree angle which lends itself to being sustainable. It has very little support on this chart until the sub-$1000 level which the all-time above makes even clearer.

Looking at these charts it's fairly reasonable to believe that in about six months it'll be under $1000.

It has no value beyond being a temporary work-around for government controlled currencies. This will not last forever as even the holders of BTC want regulations. When this happens there will be no reason to continue holding it. It will not be adopted widespread because of the disadvantages of using it over USD.

What we are seeing right now is the end for BTC. The huge speculation bubble was overblown and people saw that and rightly sold off. Good for them. Since then it's made lower highs and lower lows as more people get out. Eventually the large institutional holdings (Source 1, Source 2, Source 3) are going to get the picture and sell - tanking the market.

I predict this will be the beginning of the end of many current cryptocurrencies although I'm not up to date on all of them. It will certainly be the end of BTC.

Anthony Garcia
164 Followers
When I was about 22 years old I read a book called "Rich Dad, Poor Dad." This book completely changed my outlook on money, and for the last ten years I've been attempting to save, invest, and accumulate as much wealth as I can. I spend hours a day (almost every day) listening to and reading various financial news sources, researching and trading, and reading and writing on the weekends. Most of what I know is knowledge I've sought out, and tried to use to better myself. Hopefully you can gain a little bit of the insight I've found through my articles.