The ProShares UltraPro S&P500 (NYSEARCA:UPRO) ETF, which tracks (x3) the S&P 500, is down 39.52%. The Fed's rate hiking cycle is rattling markets, as investors do not believe the economy can withstand any more rate hikes. In my previous article, I examined how the market was expecting too much dovishness from Fed chairman Jerome Powell, and could be setting itself up for major disappointment if the Fed projects more rate hikes and the markets. It turns out Powell indeed was not as dovish as markets were expecting, and the underlying S&P 500 index plummeted 39.20 points (1.54%), dragging the UPRO down with it.

The investment seeks daily investment results that correspond to three times (3x) the daily performance of the S&P 500 Index. The fund invests in financial instruments that ProShare Advisors believes, in combination, should produce daily returns consistent with the fund's investment objective. The top holdings of the fund, as shown below, indicate that the fund managers' vastly use 'swaps' derivatives to achieve the fund's objective. The annual net expense ratio of the ETF is 0.92%. 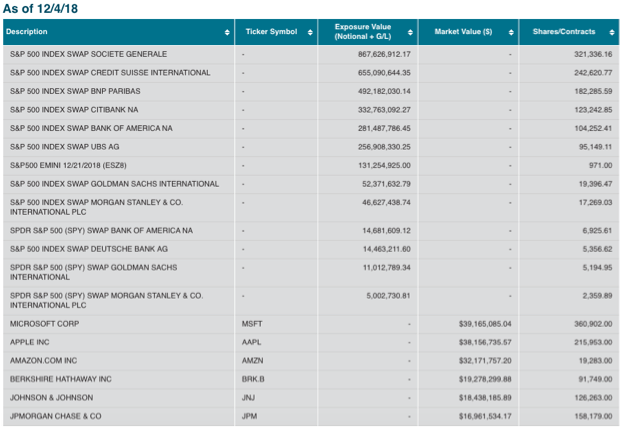 Investing in derivatives may be considered aggressive and may expose the Fund to greater risks and may result in larger losses or smaller gains than investing directly in the reference assets underlying those derivatives. These risks include counterparty risk, liquidity risk and increased correlation risk. When the Fund uses derivatives, there may be imperfect correlation between the value of the reference assets underlying the derivative (e.g., the securities in the Index) and the derivative, which may prevent the Fund from achieving its investment objective.

The reason why I have chosen this ETF distinctively is because the fund's strategy involves offering the highest possible leverage (x3) to the S&P 500 Index using 'Swap' derivatives, in comparison to other relevant ETFs. While 'leverage' certainly increases the risk profile of the security, I believe this particular asset class is worth taking more risks on in exchange for potentially higher returns. Over the very long-term horizon, the trend for equity markets is always upwards. Hence while presently it may not be a favorable time to invest in the S&P 500, whenever equity markets begin to recover, this particular ETF will offer one of the highest returns possible. Therefore I believe this is a good ETF for investors to include in their radar for potential long-term investments. Moreover, according to data from ETFdb.com, this ETF has one of the highest average trading volumes (almost 6 million), in comparison to other ETFs that also offer leveraged long exposure to the S&P 500 Index. This lowers the liquidity risk profile of the ETF, allowing investors to buy and sell shares in the ETF more easily.

On Dec. 19, the Fed raised rates as expected, but projected two rate hikes for 2019. While this was down from the three rate hikes it was projecting in September, it was not as dovish as the markets was anticipating, as investors and traders were expecting the Fed to either just raise rates once, pause its rate hikes completely. Quite frankly, I believe the market's expectations were extremely far-fetched. While economic data had certainly been weakening, there hadn't been any drastically negative surprises that would warrant the Fed to consider halting rate hikes altogether.

Nevertheless, the nosedive in equity prices is reflecting that the market believes the Fed is overdoing the monetary policy tightening process. What is more interesting to note is that Powell mentioned in the press conference that he believed rates were at the lower end of range for the 'neutral' rate. Note that the 'neutral' rate is the level of interest rate that is considered neither accommodative nor tightening. However, financial markets clearly are signaling that the Fed is already tightening credit conditions to the extent that it is undermining economic growth. Therefore, I believe the Fed and the markets have a diverging perception of what level of interest rate the economy can handle and is considered tightening.

This is very concerning, and aggravating this situation is the fact that when Powell addressed the recent financial market turmoil, he seemed relatively unaffected, stating that this type of short-term volatility is normal and that it should not stop the Fed from raising rates. This poses the question; how much do credit conditions have to tighten, and how low do equity prices have to go in order to convince the Fed that they have tightened enough and should seriously consider halting rate hikes? I believe markets are going to find out the hard way, as the S&P 500 will continue to decline following the relatively hawkish tone from the Fed.

During the first week of December, the 5-year Treasury yield fell below the 2-year yield, as the yield curve started to show signs of inverting. Long-term yields had been falling due to fears that the Fed could tighten too much and cause a recession. Some market participants believed that the Fed would turn sharply dovish to prevent the 10-year yield from falling below the 2-year yield, which would signal an upcoming recession.

Powell miserably failed to deliver on this market expectation. In fact, what is worrying is that the Fed lowered its growth outlook from 2.5% to 2.3% for 2019, acknowledging that the economy is slowing. Regardless, the Fed did not feel the need to lower its 2019 rate hike projections further than the two rate hikes currently forecasted. From this perspective, the Fed is notably hawkish.

A recession in 2019 could be considered far-fetched given that the quarterly growth rate is well above 2% and it does not seem to be falling into negative territory any time soon. However, I believe if the Fed continues to remain this hawkish even as the economic growth rate persistently decelerates, then I strongly believe the Fed could certainly drive the economy into a recession within the next two to three years.

In fact, following the Powell's statements on Dec. 19, the yield on the 10-year yield plunged as market participants felt that the Fed could be weakening the economy over the long-term, which will force it to lower interest rates in the future. Declining long-term yields is certainly not a good sign. Moreover, the spread between the 10-year and 2-year is considerably narrowing, and currently stands at just 11 basis points. I truly believe this section of the yield curve will definitely invert as well, and once this event takes place, recession fears will induce further wide-spread selling as investors will want to limit their risk exposure. Consequently, the UPRO ETF will plummet even further once the yield curve officially inverts. Therefore, risk-averse investors and traders at the moment should not buy into the UPRO ETF.

Statements made by Powell about the Fed's balance sheet were another major concern for the markets. The Fed is currently in the process of a balance sheet asset "run-off", including US Treasuries and mortgage-backed securities, which it had built up during the 'Quantitative Easing' (QE) program following the financial crisis. Given that QE was aimed at lowering interest rates, it would be logical to believe that the reversal of this process will cause yields to rise and tighten monetary policy conditions.

When asked whether the Fed would consider altering its pace of 'unwinding', Powell came across as being satisfied with the current pace and claimed that he does not see the Fed changing the procedure. The Fed currently sells $50 billion worth of bonds every month. The balance sheet value had reached a peak of $4.5 trillion in October 2014. However, since the Fed has started unwinding its balance sheet since October 2017, the total assets level has come down to $4.088 trillion.

This process will undoubtedly take years, and hence the pace of its unwinding is closely watched by market participants as it reflects the hawkishness of dovishness of the Fed. After disappointing the markets with its projections for the number of rate hikes in 2019, Powell doubled down on his relative hawkishness that the Fed is not considering slowing down its pace of balance sheet unwinding even amid tightening conditions across financial markets. This sent stocks spiraling downwards, and dragged the UPRO ETF down even further.

Going into 2019, I recommend investors not only keep an eye on changes in Fed rate hike projections, but also its pace of asset "run-off" from its balance sheet, as both these factors will be considered strong indicators of the Fed's economic outlook and its approach to monetary policy. If these two indicators reflect persistent tightening, then the UPRO ETF will have a hard time rallying higher. Or alternatively, there would have to be strong new tailwinds to strengthen the economy and allow investors to believe that the economy would be able to withstand additional tightening. At present, such strong tailwinds remain absent, as investors are widely expecting the positive effects from tax cuts fade, and earnings to slow down.

Chairman Powell disappointed markets on multiple levels. The Fed lowered economic growth forecasts while simultaneously refusing to hint at pausing its rate hiking cycle. On top of that, the Fed will continue to "run-off" bonds from its balance sheet, further tightening credit conditions in financial markets. I strongly believe the Fed's action will result in the yield curve inverting further, which will induce a recession within the next two to three years. As recession expectations rise, the performance of the S&P 500 and UPRO ETF will be undermined. While over the very long-term I am bullish for this highly leveraged ETF, I recommend investors to wait until major economic headwinds clear away overtime.

Sankalp Soni
786 Followers
I hold a degree in Finance and Investment. I have experience investing in both individual stocks and macro- driven ETFs.My writing strives to put the most recent market moves into the medium to long- term perspective, and uncover genuine buying opportunities.My main focus is on macro opportunities, including indexes, commodities, forex and bonds. However, I also write on interesting opportunities in stocks, with a particular focus on growth.
Follow