The S&P 500 index has been plunging, with many blaming the Fed for increasing rates.

However, the concept is a useful thought tool for evaluating the level of the S&P 500 Index.

This article presents a methodology, and examines current investment implications, given the expected (or feared) increase in interest rates.

Looking at the earnings of the S&P 500 index, the method here starts with E10, that is, 10 year average earnings, inflation adjusted - the E in Shiller's CAPE. 65% of that amount is capitalized at the 10 Year Treasury rate (GS10), the other 35% at Moody's Baa. Since current Operating Earnings will be substantially higher, the excess over E10 takes the Bank of America Merrill Lynch High Yield (BAMLHY).

By this line of thinking, and factoring in the two additional rate increases expected during 2019, the S&P 500 is worth 2,902, compared to Friday's close of 2,416.62. By way of evaluating the difference, here's a historical chart: 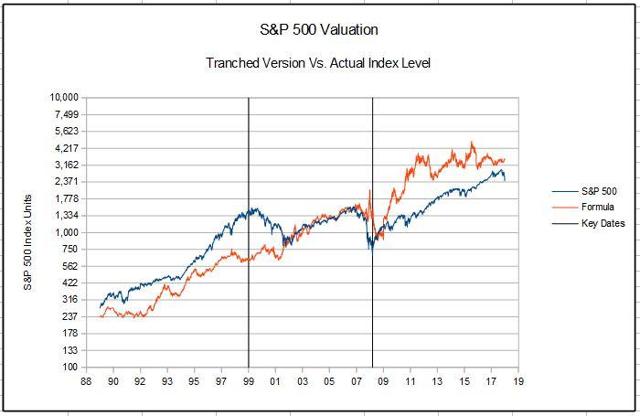 Broadly speaking, there are three time periods: before the Tech Bubble burst, from then to the Financial Crisis, and from there to the present. Up until Y2K, the market was high, according to this theory. After getting past the bursting of the bubble, during the Bush years the actual level of the index was very similar to the tranche theoretical valuation.

After the Financial Crisis, interest rates were kept at extremely low levels, due to Fed policy: QE1, 2 and 3. The equity markets slowly bought into the implications for valuation. The Formula value as shown in the chart does not include the two hypothetical rate increases expected next year. As mentioned above, the market appears to be pricing them in as a certainty.

Looking at the chart above, High Yield interest rates frequently go up when Treasuries and Moody's Baa go down. That's what's happening right now. It's a flight to safety phenomenon, and well known. There has been concern expressed lately, that the US has a credit problem, in the High Yield area. Before calling a bottom or issuing an all clear here, it would be good to see the three rates shown reverse their current direction.

A one percent increase in interest rates across the board from Friday's values would leave the indicated value of the index 14% above its current level. Two points would decrease it to 5% below. According to the line of thinking used here, markets are fearful of more than interest rates. As mentioned above, the rates we are working with don't move in a parallel fashion when the going gets tough. Additionally, the earnings yield on the S&P 500 often moves in the opposite direction from Treasuries; again, flight to safety.

The ongoing concerns are well known: trade war, tariffs, the Mueller investigation and its potential outcome, the steady drumbeat of departures from key Administration positions, and the partial Government shutdown, to name the most prominent.

Tax cuts create deficits, which increase borrowings. The Fed supposedly is going to unwind their massive holdings of Treasuries and Agency bonds. There will be upward pressure on interest rates. The method developed here provides broad indications of the severity of possible adjustments to equity pricing, as driven by interest rates. Other fears can't be logically quantified, nor can they be safely ignored.

In January, after blogging a previous version of the material presented here, I moved 1/3 of my retirement account from US equities into intermediate term Treasuries. Then in September, I liquidated half of my speculative account, as well as some S&P 500 index holdings, to buy a second home. In effect, I moved to a different asset class. For the sake of clarity, I wanted a seasonal property and bought one.

As of this moment, I plan to take my RMD for next year out of Treasuries, on the grounds that equities are undervalued. In January, I will make decisions about trying to catch the bottom, based on the most current information on the fears enumerated above.

Disclosure: I am/we are long VOO, VUVLX, VSIGX. I wrote this article myself, and it expresses my own opinions. I am not receiving compensation for it (other than from Seeking Alpha). I have no business relationship with any company whose stock is mentioned in this article.

Additional disclosure: Readers are reminded that I'm a retail investor, and don't give investment advise. I blog to expose my thinking to critical examination and comment, in the interest of making better decisions.

Follow Tom Armistead and get email alerts
+
Add a comment
Disagree with this article? Submit your own.
To report a factual error in this article, click here.
Your feedback matters to us!