As 2018 comes to a close, I like to think about stocks to place on my watch list for the New Year. The broad market declines since end of September 2018 has led to some values for dividend growth stocks. The S&P 500, NASDAQ, Russell 2000, and Dow Jones are all in or near bear market territory. As a small investor, one is always seeking suitable entry points or when to add to a position for stocks that generate decent income but have a safe yield. I tend to stay away from REITs and MLPs due to their dependence on debt, interest rate sensitivity, and in some cases large declines in share price during the last recession. For my Dividend Growth stock watch list I filter with the following criteria:

Although I have criteria to follow they serve primarily to narrow the broader list of stocks to a smaller set of companies for further research. On a case-by-case basis I make exceptions to the aforesaid criteria if a company meets some but not all four criteria. Below are short analyses of four companies that are each facing different challenges but provide decent income and potential for capital appreciation. A small investor can further research these companies for their own portfolios.

3M Company (MMM) is a Dividend King. It is part of the S&P 500 and has raised its dividend for 60 straight years. 3M is an industrial conglomerate that is broadly diversified with five different business segments of Consumer Business, Industrial Business, Safety & Graphics Business, Healthcare Business, and Electronics and Energy Business. Notably, the company is facing headwinds as the global economy slows. Of concern is that 3M has exposure to the automotive and housing markets in the U.S. and these are both slowing. Tariffs, trade wars, and increasing input costs have also negatively affected 3M’s results and thus stock price this year. For readers interested in my earlier articles on this company they are referred to “3M's Diversification Leads To Long-Term Dividend Growth But There Are Near-Term Challenges” and “3M's Sales Growth Slowed, But The Investment Thesis Remains The Same”.

One concern with 3M is that long-term debt has been consistently increasing over the past several years and some of this debt has been used for share buybacks, which is a poor use of debt in my opinion. Long-term debt was only $4.38B at the end of 2013 and increased to $12.16B at the end of 2017 and then to $13.5B at end of September 2018. The D/E ratio at end of 2017 was ~1.1 and is roughly ~1.3 in the latest quarter and these values are in general greater than the company’s historical values, which have been < 1. Despite the less conservative use of debt and higher D/E ratio, the company still has interest coverage of ~17.5 (TTM) reducing concerns. Furthermore, the company currently has sufficient liquidity with $3.5B in cash and cash equivalents. Although I would like for 3M to reduce long-term debt, I still consider the dividend safe and the relatively low payout ratio suggests that the dividend will continue growing in the future.

Illinois Tool Works (ITW) is another industrial conglomerate with a long history of dividend growth. The company is a Dividend King with a 54-year history of raising dividends. The company has 87 divisions categorized into seven operating segments including Automotive OEM, Test & Measurement and Electronics, Food Equipment, Polymers and Fluids, Welding, Construction Products, and Specialty Products. Similar to 3M, the company is experiencing a slow down due to difficult U.S. automotive and construction markets. Tariffs, trade wars, and increasing input costs have also negatively affected ITW’s stock price this year, which is down about -29% in the last year. ITW has also missed revenue estimates the past two quarters and has been downgraded by analysts as a result further pressuring the stock price. For readers interested in my earlier article this year, they are referred to “Illinois Tool Works Has Long-Term Dividend Growth But I'm Waiting To Buy”.

ITW has a dividend yield of ~3.36% and a relatively low payout ratio of ~53%. The company has historically made conservative use of long-term debt but notably debt increased from $2.79B at end of 2013 to $7.48B at end of 2017. But it has decreased to ~$6.1B at end of September 2018. The company’s interest coverage is ~14 (TTM) and ITW has ~$1.6B in cash indicating that it has sufficient liquidity. The D/E ratio has traditionally been < 1 but it was 1.63 at the end of 2017 and 1.71 in the latest quarter. This is toward the higher end of my desired range but still meets my criteria. I consider ITW to be a buy at the current stock price. ITW is a conservatively run company and seems to be lowering long-term debt. Furthermore, the dividend yield is rarely over 3% and the current yield allows small investors to obtain relatively safe income today with dividend growth. The 10-year dividend growth rate is ~11.3% CAGR suggesting that the company can consistently raise its dividend at a double-digit rate over time.

United Parcel Service (UPS) is the largest parcel delivery company in the world. In 2017, UPS delivered about 16.9M parcels per day to residences and businesses, which is greater than its main U.S. competitor Federal Express (FEDX). The company has three reporting units that are U.S. Domestic Package, International Package, and Supply Chain & Freight. UPS’ businesses include ground parcel delivery, air parcel delivery, less-than-truckload freight delivery, freight forwarding, logistics services, and its retail stores. UPS operates in an industry that requires high capital expenditures for investment in sorting facilities, trucks, trailers, planes, retail stores, drop boxes, and IT. The industry is also labor intensive. UPS is currently facing slowing global trade combined with intense competition. Furthermore, Amazon (AMZN) has entered the market as a competitor and is leasing airplanes and trucks and moving into package delivery. It is not clear how much revenue Amazon contributes to UPS but it is currently less than 10% limiting risk of revenue loss. However, UPS is investing in future growth through strategic initiatives as seen in the chart below to generate growth. 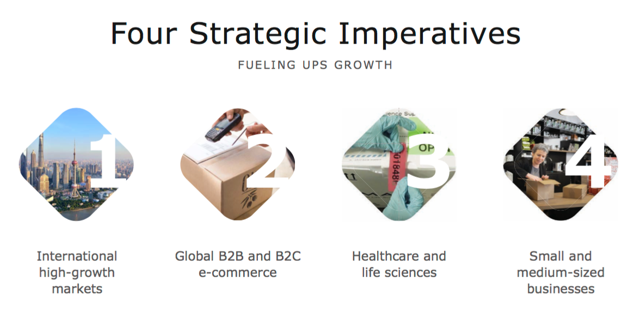 The stock price for UPS has dropped approximately -24% in the past one year giving the company a PE ratio of ~14.4. The dividend yield is ~4.05% and the last time that UPS had a dividend yield over 4% was the last recession in 2008 and 2009. The payout ratio is only ~50.4%. Notably, UPS did not increase the dividend between 2008 and 2009 during the last recession leading to only a 9-years of continuous dividend growth. Although this is below my criteria I have made an exception here due to a dividend yield greater than the S&P 500 average and comparatively low payout ratio.

The company has had relatively stable long-term debt that recently increased due to a capital investment program. Long-term debt was $10.82B at end of 2013 and increased to $20.28B at end of 2017 and was $20.1B at end of September 2018. The capital-intensive nature of UPS’ business leads to high values for D/E ratio that exceed my criteria but interest coverage is ~12.7 (TTM) and the company has $4.84B in cash on hand alleviating some concerns. The increased competition from Amazon is also a concern but the business of package delivery requires high capital investment and has high fixed costs possibly limiting Amazons growth in this market. Moreover, UPS has beaten revenue estimates six out of the last eight quarters and only missed EPS estimate once in the last eight quarters. Furthermore, the company grew revenue +8.1% on shipment growth of +3.3% in the latest quarter and FCF for the year was expected to be over $5.0B+. I consider UPS a buy at the current stock price, dividend yield, and PE ratio.

Amgen (AMGN) is not a traditional dividend growth stock since the company only started paying dividends seven years ago. Amgen is biotechnology therapeutic company that has developed and marketed drugs in the oncology and immunology markets. The company has several drugs to treat anemia and neutropenia in patients that have experienced kidney failure or have low white blood cell counts after receiving cancer medications including Epogen, Neupogen, Aranesp, and Neulasta. These four drugs together generated $8.23B in sales in 2017. Amgen’s major blockbuster drug is Enebrel, which treat five chronic diseases including rheumatoid arthritis, juvenile rheumatoid arthritis and psoriatic arthritis, plaque psoriasis and ankylosing spondylitis. This drug generated $5.43B or ~24% of total sales in 2017. The company also has important drugs in Prolia that treats osteoporosis, Xgeva that prevents fracture in cancer patients, and Sensipar that helps treat patients with kidney problems.

The company is thus diversified in its revenue base and not dependent on a single drug. In addition, Amgen has a robust pipeline that includes new molecules and therapies and biosimilars of its competitor’s drugs. But at the same time Amgen is facing expiration of patents and competition from biosimilars to some of the company’s existing blockbuster drugs. The main risk that has been pressuring Amgen’s stock price in 2018 has been the slow decline in revenue for Enabrel and Neulasta. In Europe, Enebrel’s patent has expired but in the U.S. several patents still exist but these will start expiring in 2019. 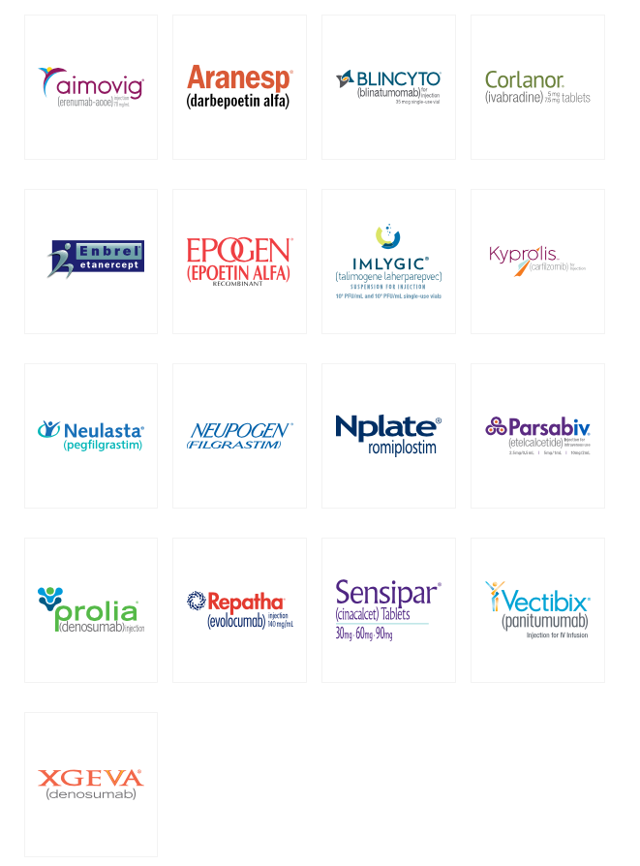 From a debt perspective, Amgen is conservatively positioned. It had $29.6B in long-term debt at the end of 2013 and this increased only to $34.2B at the end of 2017 and then decreased to $29.4B at the end of September 2018. But long-term debt is offset by $29.9B of cash at end of September 2018. Annual FCF was over $10B in 2017 indicating the company has the ability to further pay down debt even after paying the dividend. Interest coverage is ~8 (TTM) and D/E ratio was ~1.4 in 2017 and ~2.0 in the latest quarter due to a reduction in equity. I consider Amgen a buy at the current stock price. The company has beat on revenue and EPS the last three quarters. Furthermore, Amgen raised guidance for both revenue and EPS guidance for the year.

Dividend Power
5.55K Followers
I am a self-taught individual investor and I have been investing in stocks for approximately 20 years. I focus on dividend growth investing with a long-term horizon since I believe in the compounding power of dividend growth investing. I generally look for undervalued large cap stocks with sustainable dividend growth and capital appreciation potential. My second focus is tech and small- or mid-cap stocks with or without dividends for their growth potential. I try to provide a little more in depth analysis weighing the positives and negatives. You can see my performance at my Tip Ranks profile. I am now in the Top 100 out of 9,459 (81st and in the top 1.0%) financial bloggers (April 2022).You can follow me at my blog Dividend Power. Read my e-book --> 10 Forever Dividend Growth StocksI also now write stock analyses for Sure Dividend as a part-time free lance equity analyst. I provide investment analyses and research for their Sure Analysis Research Database.
Follow

Disclosure: I am/we are long MMM, ITW, UPS, AMGN. I wrote this article myself, and it expresses my own opinions. I am not receiving compensation for it (other than from Seeking Alpha). I have no business relationship with any company whose stock is mentioned in this article.