This will be the final installment of a six part series I have recently penned on Seeking Alpha about Elliott Wave analysis. In this installment, we will address how to use technical indicators to assist with our wave count.

In fact, the great majority of the time, you will see the market continue to sell off despite this indicator having already hit a point of being oversold. But, how can that be?

As I have said many times before, I know of no other analysis methodology which provides better context to understanding the market than Elliott Wave analysis. Back in the 1930s, R. N. Elliott theorized that markets move through five waves in a primary trend, and three waves in a corrective trend. So, when a five-wave structure is nearing completion, you have the context within the market to be able to prepare for a reversal of the trend. 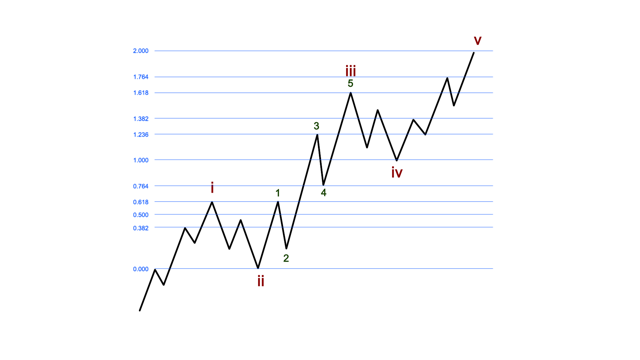 That means one must first understand that the chart you are focused upon is in a third wave. When that third wave is pointing down, it means the market not only hits the oversold condition, at which time many analysts will prematurely declare a bottom, it usually means that the technical indicator will become embedded within that oversold state. In other words, just because an indicator strikes an oversold state does not mean the market will turn back up. Rather, it may mean the indicator becomes embedded in this state as price continues lower while in the heart of a third wave decline.

Within the five-wave structure of the third wave, the third wave of this sub-structure is where we see technicals embed. Once the technicals move out of the embedded status, it often signals that we are seeing a fourth wave within that third wave five-wave structure, which sets up the market to drop again in price to lower lows in a fifth wave, but the technical indicator will only see a positive divergence where price strikes a lower low but the indicator does not. This tells me that the market is completing the fifth wave of that third wave down.

Once the market provides us with a first indication of positive divergence, it often means that the market has now completed the third wave down. Thereafter, I would expect a fourth wave “bounce,” which will develop further potential divergence in the technical indicator. That means that when we drop to complete the fifth wave to the downside, the market will exhibit a second positive divergence, which will then signal we are completing the five-wave structure to the downside.

At the end of the day, it means we need to see two positive divergences in a technical indicator to suggest the market is bottoming in 5 waves to the downside, which should then have us ready for a trend change. This type of structure, supported by the technicals as noted above, is often a very strong indication that the market is nearing the point of a strong trend reversal.

And, of course, the same applies when tracking a market or stock rally, but in the opposite manner.

While I have seen comments through the years regarding how Elliott Wave analysis was akin to tarot card reading, I hope that this six-part series has opened your eyes as to how Elliott Wave analysis, coupled with our Fibonacci Pinball method and supported by technical analysis, provides a very objective perspective into tracking market sentiment, which I believe is the true driver of market pricing.

“Since retiring I've used no less than 5 different services trying to find something that makes sense to me. This is it. I wish I started using it sooner. . . Unbelievable calls, Avi.”

“There is NO BETTER analyst on the planet than Avi Gilburt's "The Market Pinball Wizard"!”

“I have been following you for a year and your accuracy is amazing. I am an old timer and I have never seen anything like it.”

Avi Gilburt
69.14K Followers
Author of The Market Pinball Wizard
The #1 Service For Market and Metals Direction!
Avi Gilburt is founder of ElliottWaveTrader.net, a live trading room and member forum focusing on Elliott Wave market analysis with over 6000 members and almost 1000 money manager clients. Avi emphasizes a comprehensive reading of charts and wave counts that is free of personal bias or predisposition.