Personal Incomes and Expenditures, as well as Personal Disposable Incomes are increasing.  The correlation between home price increases and income increases is strong.

Recent real estate economic numbers suggest there is a slowing in the housing market, yet this slowing is only relative to recent highs and not from a broader picture.

Interest rate moves higher have not stymied real estate sales, nor would they in our imperfect market.

Recently, the real estate market has slowed. There are concerns of the economy moving forward, concerns that I do not share and have written about multiple times on Seeking Alpha. Instead, I believe that while the U.S. economy is slowing relative to its hyper growth pace from ultra-low rates, the economy in general is still expanding and will continue to do so. The U.S. consumer is seeing their incomes increase at steady rates and consumption is moving along with that. One of the items that consumers will continue to buy is real estate. While there has been a recent lull in recent housing numbers, I believe this is to be short lived; real estate purchases and prices will start moving higher again.

This is cyclical and real estate industry participants will tell you that the beginning of the year is when a large demographic of home buyers begins the quest to buy a new home. That demographic is families with school-aged children. Their hope is to purchase a home and move in before the start of next year's school term. We are just about to see the beginning of that process ramp up again.

But, both new home sales and existing home sales have been declining and the data is showing signs of weakness:

Again, I see this as being cyclical; a smaller move in a bigger picture. While both of these charts are well off their recent highs, they are still relatively on the higher side. The recent moves higher in existing homes sales may suggest that the bottom has been reached in this smaller cycle, and both data points will advance higher from here.

At the same time, it has been difficult to pin down why home builders have been so subdued with their numbers. If real estate prices were to continue higher and higher, in a perfect, linear economy, wouldn't more and more supply enter the market? This simply has not been the case.

This is where analysis of the housing market gets interesting to me. Price continues to move higher and higher. Yet, builders are not moving in to capitalize on that opportunity. If price continues to move higher, wouldn't a home builder be supplying in an economic segment that is seeing increasing price gains? If I were a builder, that would be a confidence boost to me when making a yes decision on building new projects.

However, the government has stepped in to keep interest rates at bay for long-term mortgage rates with the invention of Freddie Mac and Fanny Mae. I am a believer that the 30-year mortgage would be much higher in a perfect market. Instead, these pseudo-government agencies keep interest rates abnormally low. It's simple economics 101: With higher demand on money (interest rates), there would be higher price (home price).

Look again up at the Shiller Home Price Index. In a truly perfect market, as the price index increased, so too would the interest rate. This would act as a mechanism to keep prices lower. But, that does not happen, as the chart below shows:

It is a philosophical question to ask: What would mortgage rates be like without Freddie and Fanny? The most obvious answer is: Higher. But, we don't live in the world without Freddy or Fannie, so we do not need to wonder too much about this. But, what I see is that mortgage rates are artificially low and because of that more and more individuals are capable of buying homes that perhaps they would not ordinarily be able to purchase.

There is another aspect of the economy and interest rates: Interest rates movements higher are reactionary; they are the effect, not the cause of an economy. The Federal Reserve is raising interest rates because the economy is expanding and inflation is moving higher. Consumers are consuming more, and one of the items they will continue to consume more of is homes. And, as long as interest rates for mortgages remain artificially lower than they could be, more and more consumers will opt to buy a home. This is the cycle of real estate.

I keep reiterating this, and it will be a constant drumbeat for me: The Federal Reserve is raising interest rate in reaction to an economy that is capable of sustaining higher rates. The Fed is not trying to slow the economy from hyper-growth; they are bringing rates up from their ultra-low levels.

Believe that he Fed's movements will not have any adverse effect on the consumer and therefore, the consumer will continue forward.

There are many that believe the economy is likely to move into a small recession over the course of the next year. This is not a viewpoint I share. I look at the consumer's income as the starting point of my analysis. Here is the latest chart from both Personal Income and Personal Expenditures - my chart, via The Bureau of Economic Analysis: 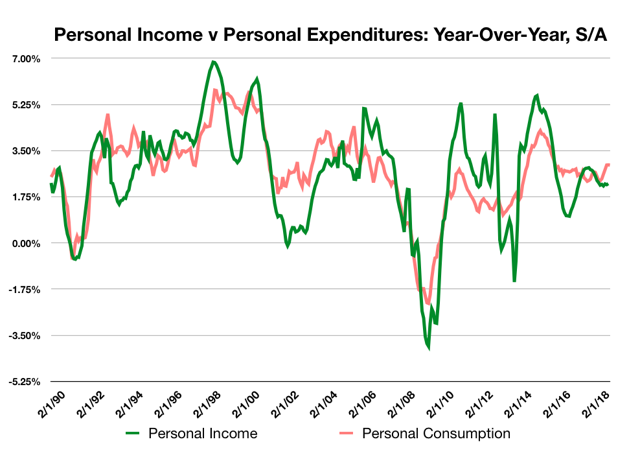 When incomes for families increase at a higher rate, then those families purchase items at a greater rate, all relative to the year prior. This is for when I analyze the economy, what is the rate of growth?

My expectation is that incomes and consumption will move higher in the next 3-6-9 months, both gravitating towards the 3.50% Year-Over-Year growth rate (given the chart data above). This, despite moves higher in short-term interest rates. Ultimately, this will translate into a continuation of the bigger move higher in real estate purchases and prices. Keep in mind, economics is not an event, it is a process.

I have largely shrugged off the minutia of the data we have seen that suggest a broader slowing of the economy. To me, there is not enough there yet to derail my analysis. So far, I've been proven right. However, while I believe the consumer remains healthy, and so should the outlook for the economy, there are concerns, or potential headwinds. Certainly our mercurial president could easily derail our economy in many ways.

First is the threat of an even greater trade war. While I do not want to go too far down this road, I will say that I share some of the concerns of our president with regards to fair trade. I would not mind seeing America gain some concessions from this. But, I hope that any concessions gained do not come at an exasperated expense to the economy. I feel that the forthcoming results will be amicable and the economy can move forward with an eventual lifting of tariffs.

Also, there are concerns of the Fed not being entirely autonomous, although the very most recent news suggests the president may be backing down from this latest cause he has undertaken. The record move higher in the stock market on the day after Christmas suggests this is the case. It is my personal belief that all the noise that has been made in this area of our economy is over with.

If, however, the economy does see some faltering from some of the issues we have seen lately, then it will be back to the drawing board for my analysis. These are things that I keep in the back of my mind, but for now I am resolute that the consumer, and hence, the economy, remain firm and expansionary.

What To Look For With Real Estate In Coming Months

If you want to see what is going to happen with real estate over the course of the next 6 - 12 months, keep a sharp eye on the consumer's income and consumption numbers. Both have been edging up slightly over the past few months. This will translate into an increased rate of purchases for real estate; this also means a continuation of the bigger upward move in the Case-Shiller Index.

Follow D. H. Taylor and get email alerts
+
Add a comment
Disagree with this article? Submit your own.
To report a factual error in this article, click here.
Your feedback matters to us!