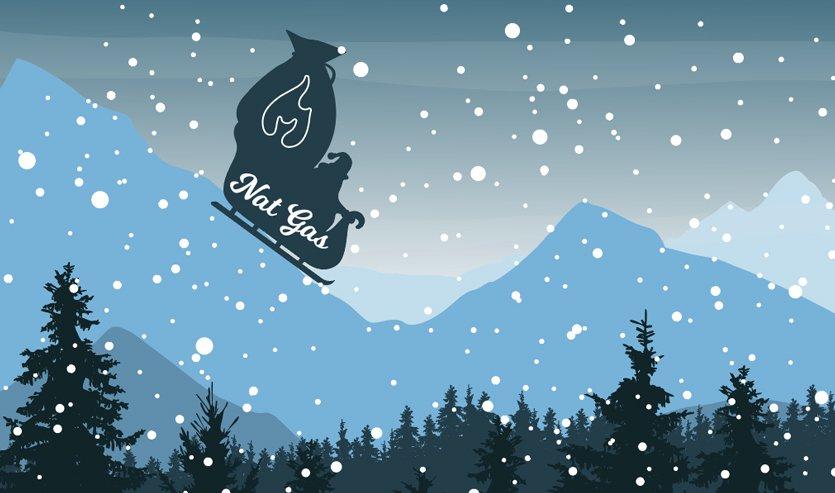 In early November, Henry Hub natural gas prices awakened from months of range-bound trading, soaring from $3.24/MMBtu on November 1 to $4.84/MMBtu on November 14, the highest close since January 2018. Natural gas implied volatility also averaged 77% in November, its highest level in 17 years, after hovering around 20% over the summer. Natural gas then declined 27% from its recent peak to $3.54/MMBtu on December 26. Despite all of the ups and downs over the last two months, it's not time to put away the Dramamine just yet. 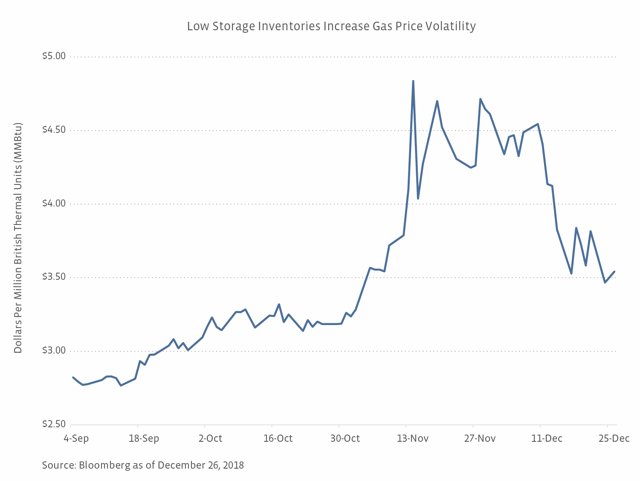 According to the Energy Information Administration (EIA), Lower 48 gas storage levels as of October 31 totaled 3,208 billion cubic feet (Bcf), the lowest level at the end of an injection season since 2005. The EIA attributed the low inventories at the end of October to increases to gas storage during injection season that fell short of the five-year average and an unusually cold April, which delayed the injection season by approximately four weeks. Low storage levels entering winter, as shown in the chart below, are arguably the primary driver of the recent volatility in prices. The impact of lower gas inventories is greater supply uncertainty when demand increases and gas price volatility as seen over the last month. 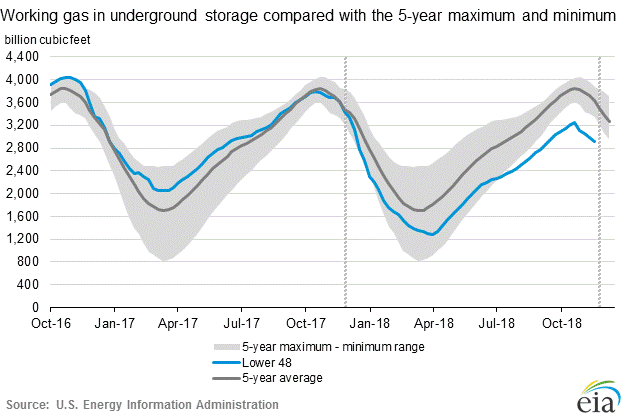 Weather can have a significant impact on gas prices on a daily basis since natural gas is used as the primary heating fuel in nearly half of all US households. Additionally, approximately 40% of households rely on electricity for heat, with natural gas expected to account for a third of electricity generation this winter. One of the specific ways to measure the impact of winter weather is heating degree days (HDD), which are a relative measure of how cold a time period is. A large number of HDDs results in greater consumption of natural gas for heating homes and electricity generation, which can lead to higher prices for natural gas as demand increases. Notably, November had 14% more HDDs than the month's 10-year average, which contributed to last month's price spike. However, warmer weather across most of the US so far in December has sent natural gas prices lower. Since temperature variance is a major factor in determining consumption, weather forecasts are always in focus for natural gas observers, including the 8 to 14 day outlook from the National Weather Service Climate Prediction Center (CPC). On December 17, for instance, gas prices dropped nearly 8% after the CPC forecasted above-average temperatures for the eastern half of the US.

For 2018-19, we could see a cold winter with an active polar vortex, like in 2013-2014, or a moderate winter due to continued weak El Niño conditions. El Niño generally leads to milder winters in the US, which could reduce the number of HDDs over the next few months and therefore keep gas price upside in check. In spite of El Niño, however, forecasters are closely watching the polar vortex for possible outbreaks of cold weather in January and February in the eastern half of the US, which could lead to higher gas prices.

What about production growth?

Given record high natural gas production in the US and expectations for continued growth,1 one could argue that increased production should help alleviate the dependence on storage and contribute to less volatility, but November's price action refutes that. Near-term production growth without adequate pipeline takeaway capacity is not that helpful for natural gas prices, though sustained and elevated production levels do create an opportunity for midstream companies to build out pipelines and gas processing plants. As shown below, natural gas production growth has been dominated by the Marcellus/Utica and the Permian. Pipeline additions have helped debottleneck the Northeast, but Permian natural gas takeaway remains inadequate. Weather will likely contribute to volatility this winter, but continued production growth likely creates a ceiling for prices in the upcoming year, particularly as recently added takeaway capacity in the Northeast ramps and new gas pipelines come online in the Permian. 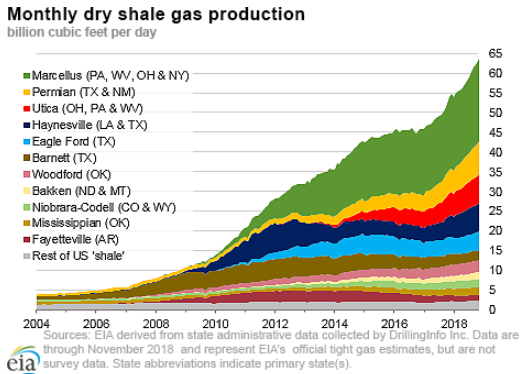 Inadequate pipeline takeaway capacity is evidenced by outsized discounts between regional price markers and the Henry Hub benchmark (basis differentials). For example, the average discount for gas prices at the Dominion South hub in Pennsylvania relative to Henry Hub averaged over $1/MMBtu in 2016 and $0.90/MMBtu in 2017. The addition of pipeline takeaway capacity has narrowed the differential to $0.40/MMBtu on average in 2018. Meanwhile, Permian gas prices (Waha Hub) have seen an average discount of $1.10/MMBtu to Henry Hub this year, with discounts much wider ($2+) recently.

The Permian still awaits the debottlenecking that has helped the Northeast. Based on the futures curve, the differential between Henry Hub and Waha will likely remain wide until the second half of 2019 when new pipeline projects start up. The Gulf Coast Express Pipeline, which is being built by Kinder Morgan (KMI) and its partners DCP Midstream (DCP), Targa Resources (TRGP), and Altus Midstream (ALTM), will carry up to 1.98 Bcf/d of natural gas from the Permian to Agua Dulce, TX, when it starts up in October 2019. Also slated to come online in 2019 is the 1.9 Bcf/d Pecos Trail Pipeline from private firms NAmerico and Cresta Energy. In late-2020, additional pipeline relief should come from the Permian Highway Pipeline - a 2 Bcf/d line from Waha to Katy being built by KMI and EagleClaw Midstream (ALTM also has an option acquire an equity interest in the line).

As these pipelines come online and better connect supply with demand, perhaps next winter will see less volatility in natural gas. That said, there will be other notable changes for the natural gas market that could impact prices, including growing LNG exports as additional export capacity comes online next year (read more). The good news for midstream investors is that growing natural gas production creates opportunities for new projects with cash flows largely insulated from the price volatility discussed.

Natural gas price volatility has returned and should continue through this winter as traders and investors follow weather and storage levels closely. Given production growth, midstream companies continue to have ample opportunities to construct new gas pipelines to connect production with key demand areas and coastal export sites.

1. US dry natural gas production is expected to average 83.3 billion cubic feet per day (Bcf/d) this year and to grow over 8% to 90.0 Bcf/d in 2019 according to the EIA's December Short-Term Energy Outlook.

Disclosure: © Alerian 2018. All rights reserved. This material is reproduced with the prior consent of Alerian. It is provided as general information only and should not be taken as investment advice. Employees of Alerian are prohibited from owning individual MLPs. For more information on Alerian and to see our full disclaimer, visit http://www.alerian.com/disclaimers.

Michael Laitkep is an Energy Research Analyst at Alerian, which equips investors to make informed decisions about energy infrastructure and Master Limited Partnerships (MLPs). Mr. Laitkep seeks to promote understanding of the Alerian Index Series and support broader understanding of the role that midstream assets play in North American energy markets. Mr. Laitkep previously worked as an Investment Operations Associate at Capital Group in Los Angeles. Mr. Laitkep earned his B.A. in Plan II Honors and his B.B.A. in Finance from the McCombs School of Business at The University of Texas at Austin.

Alerian and S-Network Global Indexes
3.57K Followers
Alerian is now VettaFi! VettaFi, a data, analytics, and thought leadership company, is transforming financial services from an industry to a community—one relationship at a time. In addition to providing interactive online tools and research, VettaFi offers asset managers an array of indexing and digital distribution solutions to innovate and scale their businesses. With $14 billion in assets benchmarked to its indexes – and more than 200 customers globally – asset managers look to VettaFi for benchmarks and best-in-class index solutions at competitive prices.