Editor's note: Seeking Alpha is proud to welcome William North as a new contributor. It's easy to become a Seeking Alpha contributor and earn money for your best investment ideas. Active contributors also get free access to the SA PRO archive. Click here to find out more »

Despite oil being at 17 month lows, dropping over 40% from its peak, many in the airline industry are unjustly at, or close to, their 52 week low. Also, a reduction in fuel hedging will amplify the benefit from the drop in oil prices, potentially leading EPS to be over 20% higher than recent guidance suggests.

Oil as a major input cost

The second largest expense for most airlines is the cost of jet fuel, the only cost higher being that of labor. As a result, oil prices can be very influential on profit margins and overall net income, making it important to consider oil prices when investing in the airline industry. The graphic below shows the inverse correlation between oil prices and overall airline industry profits. 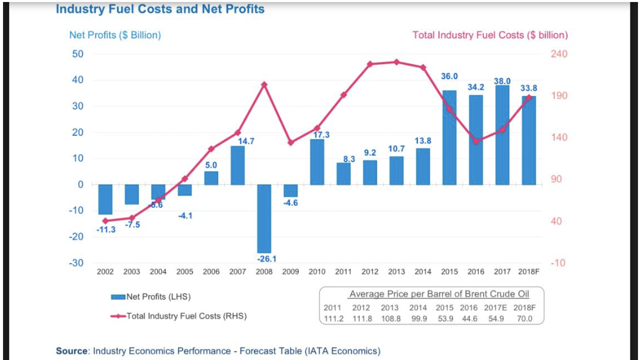 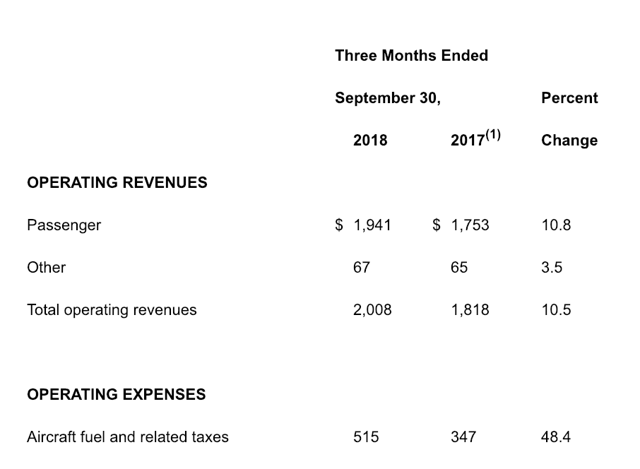 As the chart below depicts, the price of oil is returning to the levels that it was in Q3 of 2018, if not slightly lower. As a result, the price JetBlue pays for jet fuel per gallon is likely to be even lower than it was in Q3 of 2017 ($1.69), implying over a 27% saving per gallon. If that 27% decrease were to be applied to last quarters aircraft fuel and related taxes expenditure, there would be $139 million dollars in savings, raising JetBlue's EBITA from $83 million to $222 million (83 original + 139 in savings). This shows how much oil prices can impact an airlines bottom line.

WTI Crude Price From 2017 to Present

A fuel hedge contract allows for an airline to buy options or commodity swaps. The benefits of a fuel hedge are that it enables an airline to determine the the price of their jet fuel in advance, allowing them to better plan flights and reduce fluctuation in ticket prices. Also, it protects the airline from a large upswing in the oil market, which would increase their input costs, reducing net income.

Although hedging may sound like a good way to mitigate risk, it can also decrease an airline's bottom line as the company must pay in order to hedge. As a result, airline companies that do not hedge will reap large rewards when oil prices tumble as they are able to purchase cheap oil, while not paying millions of dollars to hedge against higher prices.

A great example showing just how much it costs to hedge fuel comes was Delta in 2015. In Q1 of 2015, Delta (DAL) lost over a billion dollar in its fuel hedging portfolio when the price of oil plummeted. In 2015, Delta (DAL) ended up paying $2.40 per gallon, while American Airlines (AAL), which was not participating in a hedging program, had a per gallon price of $1.90.

So, where does this leave the airlines for the future? I believe that these benefits of a drop in oil will begin to partially show up in Q4 of 2018 with a decrease in jet fuel expenditures per gallon. The average price of jet fuel thus far in Q4 of 2018, including projected fuel and transportation costs, is $2.16 compared to that of $2.30 in Q3 of 2018, a decrease of 6%. For this example, I am going to use American Airlines (AAL) as they will not be impacted by any historical hedging as they have not hedged at all during these time periods.

In 2018, American Airlines (AAL) paid the following for fuel:

*estimated based on average of jet fuel (October 1st to present) plus $.18 for fuel and transportation costs

American Airlines (AAL) is just one of the many airlines that will see such a boost to the bottom line as a result of lower jet fuel prices, causing a great reduction in airline companies' P/E ratios.

According to American Airlines, "Our business is very dependent on the price and availability of aircraft fuel. Continued periods of high volatility in fuel costs, increased fuel prices or significant disruptions in the supply of aircraft fuel could have a significant negative impact on our operating results and liquidity."

It wouldn't be fair to say that my thesis is foolproof because it is not. There is always a chance a large spike in oil prices could occur, leading negative results. Additionally, the reduction or total stoppage of hedging could act as a double-edged sword, brutally punishing airline companies by potentially making them face to full brunt of higher jet fuel prices.

That being said, my thesis is based on what has already occurred and the prices that currently exist. Based on this information, it is quite clear that the market is undervaluing the quantitative boost many airlines will receive to their bottom line as a result of this selloff.

Jet fuel is a very important factor in determining the profitability of any company in the airline industry. Normally a company's second largest cost is around 20-33% of total costs. When jet fuel prices are low, airlines become much more profitable, as the price for each gallon of fuel becomes much cheaper. Some companies use hedging to reduce the impact that rising oil prices can have; however, it can easily backfire when oil prices slip, as it did with Delta in 2015, causing an over billion dollar loss. As a result, many companies have stopped, or greatly reduced, the amount that they hedge. That being said, these companies that stopped hedging are currently getting the best of both worlds. First, they no longer have to spend millions of dollars on a hedging program. Second, they reap the benefits of larger profit margins, due to one of their largest input costs being much less expensive. All in all, the drastic decline in oil will lead airlines to beat recent EPS guidance by a large margin, push P/E ratios lower, and create a buying opportunity for a potential airline investor.

William North
726 Followers
Hello! My name is William North. Through writing articles on this platform, I hope to add to the informational discourse surrounding a variety of securities. Join me as I share my knowledge and perspective to help you better navigate the market.
Follow