Putting politics aside, let's look at the numbers that the stock market is giving us in the hope of finding some direction going forward.

The chart below shows the track of the market just during the month of December 2018. I call this "A December to Remember." This has been one of the worst Decembers, and one of the worst months, in stock market history.

In terms of scale, it doesn't match the market crash of 2008 or the Tech Wreck of 2001, but it is notable nonetheless. 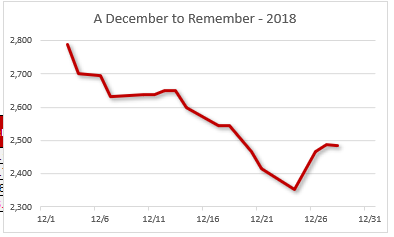 Of note is the 15% drop from the start of December to the end. That's a rare event, historically speaking. Also note the historic one-day rally on December 26th. That was the 18th biggest one-day rally in market history from 1950 to today.

This next chart shows the track of the stock market in rolling one-year returns since the election of Donald Trump in November 2016. 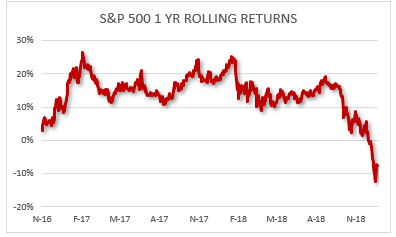 I find this chart fascinating. Bear in mind that each point on this chart represents the percent change from one year prior. Beginning on election day, the market had gained 2.9% over the prior 12 months. This period was dominated by the election and all the drama that came with it.

By the time Trump took the oath of office, the market had only managed to gain 2.9% on a year-over-year basis. After the election, the market took off. From a gain of 2.9% at the start of the Trump era, the market exploded to a gain of 26.5% by February 2017 - just one month after Trump took control.

Sadly, this turned out to be the best the market would do under Trump, and it would never be that good again. The vaunted Trump Rally lasted just one month. Very few people realize this. There is a popular story in the media that the Trump Rally lasted until recently. But that story is not supported by the facts.

What can we gain from this data? The first thing is that we shouldn't take what the media presents as the gospel truth. The media has its own agenda, which is to maximize eyeballs. The more dramatic it can make a story, the better it is for its bottom line.

The truth is that this market is struggling in a big way. We barely escaped the 20% loss that defines a bear market. It wouldn't take much effort by the market bears to break through this level.