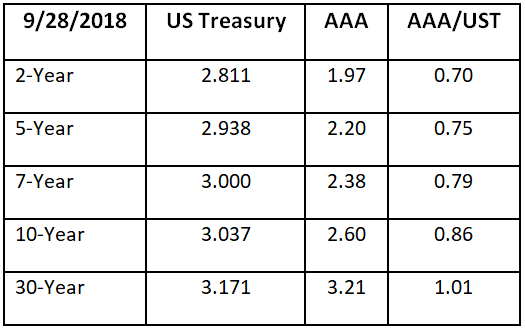 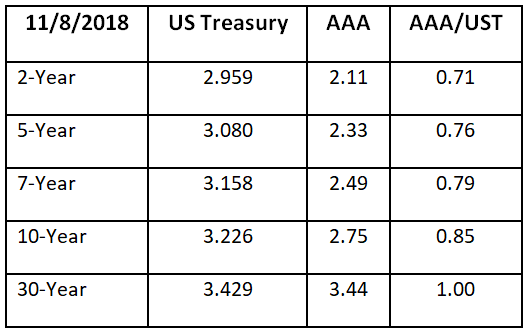 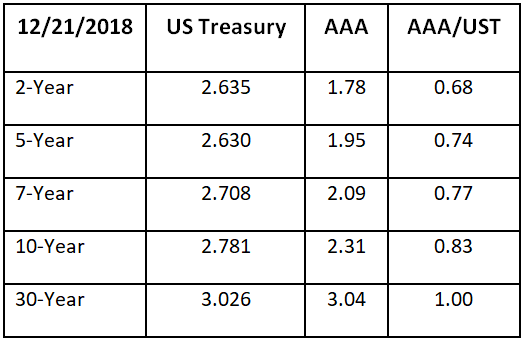 The consternation and volatility in the stock market are the main reasons for yields doing a U-turn.

Some of the other themes affecting muni yields we discussed earlier this month: 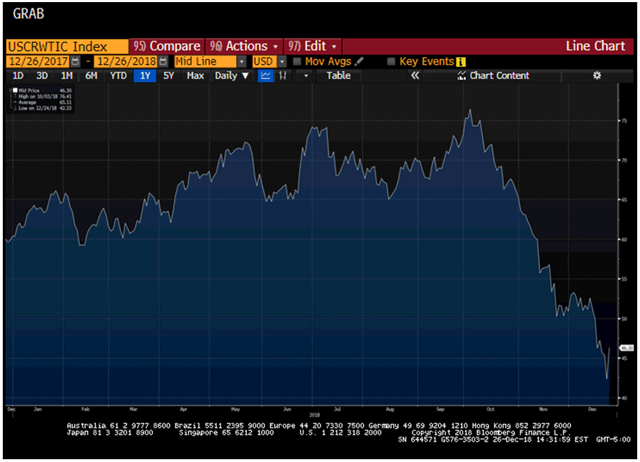 The freefall in oil suggests that other prices may also be falling, so the combination of HIGHER yields earlier in November and stable-to-falling core CPI certainly made REAL yields seem much more attractive this fall.

Now that yields have fallen, let's survey the landscape. 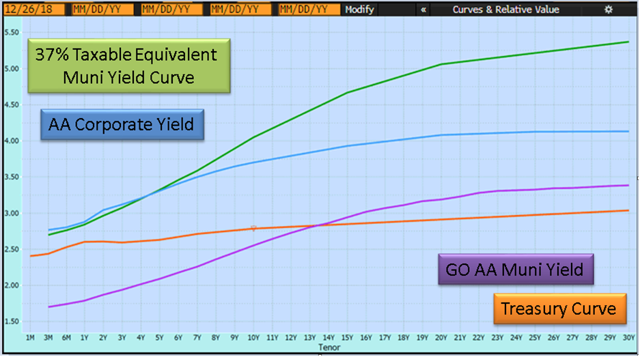 The above graph shows the current muni AA curve and the Treasury yield curve. The curves demonstrate why we have used a barbell strategy, particularly on the tax-free side, where longer muni yields are CHEAPER than Treasury yields. We believe those high yield ratios on the longer-maturity spectrum eventually go back to 100% or under - this outcome would be consistent with other Federal Reserve hiking cycles. For spread purposes, we have also included a AA corporate bond yield curve and created a taxable-equivalent muni yield curve using the current top tax rate of 37%. This comparison demonstrates the advantage of munis over Treasuries for any level of taxpayer and the additional advantage of tax-free munis over corporates for high-tax payers, in the five-year tenor and beyond. The much lower default experience of munis versus corporates simply stretches this advantage.

The Fed also made mention of two possible increases next year and did so with less flexibility in the language, which helped to spook the equity market after the announcement last Wednesday. Our thoughts are that if core inflation remains where it has been, at 2.0-2.25%, and if there are more Fed hikes next year, the Fed will finally have gotten fed funds to a positive spread over core inflation - where it has not been for 10 years. That would appear to be a good place for the Fed to pause. And as we get to that pause, we will begin to pick up the pace of moving very-low-duration assets out somewhat further on the yield curve to lock in rates, as shorter to intermediate rates most likely slowly work their way down.

Happy New Year to all our readers!

David Kotok
2.06K Followers
David Kotok co-founded Cumberland Advisors in 1973 and has been its Chief Investment Officer since inception. David’s articles and financial market commentaries have appeared in The New York Times, The Wall Street Journal, Barron’s, and other publications. He is a frequent contributor to Bloomberg TV and Bloomberg Radio, Yahoo Finance TV, and other media. He has authored or co-authored four books, including the second edition of From Bear to Bull with ETFs and Adventures in Muniland. He holds a B.S. in economics from The Wharton School of the University of Pennsylvania, an M.S. in organizational dynamics from The School of Arts and Sciences at the University of Pennsylvania, and an M.A. in philosophy from the University of Pennsylvania.David has served as Program Chairman and currently serves as a Director of the Global Interdependence Center (GIC), www.interdependence.org, whose mission is to encourage the expansion of global dialogue and free trade in order to improve cooperation and understanding among nation states, with the goal of reducing international conflicts and improving worldwide living standards. David chaired its Central Banking Series and organized a five-continent dialogue held in Cape Town, Hong Kong, Hanoi, Milan, Paris, Philadelphia, Prague, Rome, Santiago, Shanghai, Singapore, Tallinn, and Zambia (Livingstone). He has received the Global Citizen Award from GIC for his efforts. David is a member of the National Business Economics Issues Council (NBEIC), the National Association for Business Economics (NABE), has served on the Research Advisory Board of BCA Research and is currently on the advisory board of RiskBridge Advisors. He has also served as a Commissioner of the Delaware River Port Authority (DRPA) and on the Treasury Transition Teams for New Jersey Governors Kean and Whitman. Additionally, he has served as a board member of the New Jersey Economic Development Authority and as Chairman of the New Jersey Casino Reinvestment Development Authority.
Follow
2 Comments