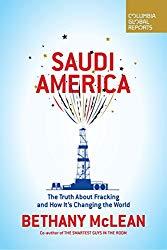 Bethany McLean, the well-known financial journalist (she co-authored The Smartest Guys in the Room and All the Devils Are Here and wrote Shaky Ground), has turned her attention to shale oil and gas in Saudi America: The Truth About Fracking and How It's Changing the World (Columbia Global Reports, 2018). In this 140-page piece, she doesn't address environmental concerns about fracking. Instead, her focus is on assessing the "breathless predictions about America's future as an oil and gas colossus," which, she argues, "has more to do with Wall Street than with geopolitics or geology."

Central to her story is "America's most reckless billionaire," as Forbes once described the late Aubrey McClendon, the founder of Chesapeake Energy (CHK). He was a "flag waver for natural gas" and fracking, arguing that, with fracking, gas production was no longer wildcatting but manufacturing. He went all in, creating a vast web of debt for Chesapeake as well as himself personally. As gas prices dropped, so did Chesapeake's stock, but he remained a true believer and doubled down, announcing deal after deal. "But the economics weren't working anywhere," and McClendon found himself in financial and legal hell. At the age of 56, he was killed when his car collided with a concrete wall at high speed. The state medical examiner ruled his death an accident.

As the economy has rebounded after the great recession, so has fracking, thanks in large measure to technology. Production at the Permian Basin increased from just shy of one million barrels of oil a day in 2010 to over 2.5 million barrels a day in 2017. The International Energy Agency predicts that, within a few years, output will be more than four million barrels a day. And the break-even cost has plunged from around $70 in 2008 to less than $50 today, some saying as low as $25, or even $15. But these break-even figures do not take into account the cyclical nature of service costs. As the price of oil rises and demand for services (such as renting rigs, hiring crews, purchasing sand) increases, so do the costs. One analysis claims that almost half of the reduction in break-even costs was due to a temporary plunge in service costs.

Wall Street has been supporting the comeback of shale, to the tune of about $70 billion in capital in 2015 and $60 billion in debt in 2017. "Wall Street's willingness to fund money-losing shale operators is, in turn, a reflection of ultra-low interest rates." Because, despite higher oil prices, most shale operators are still losing money; in the first quarter of 2018, only five companies generated more cash than they spent.

What is the future of the shale revolution? It's hard to say. Shale wells deplete, global alliances shift, renewables are becoming less expensive. The administration's push to allow drilling in previously prohibited areas might create an oversupply and crater prices. "If this comes about at a time of rising interest rates and the end of the era of cheap capital, we may soon begin talking about how the Trump Administration killed the shale revolution." Or not. Basically, we don't have a clue about what's coming next.

Brenda Jubin
466 Followers
Brenda Jubin is an independent trader and investor with an academic and business background. She taught philosophy at Yale and was dean of Morse College, one of Yale's twelve undergraduate residential colleges. She then founded Brevis Press, a company specializing in academic press book production. Throughout she invested in stocks and mutual funds. She has now settled into the life of a full-time trader and investor. She also writes the blog Reading the Markets (http://www.readingthemarkets.blogspot.com).
Follow
1 Comment