Transcat (NASDAQ:TRNS) has an attractive business model with a strong economic moat. It is able to sustain its market share by driving operational excellence and leveraging on technology as a competitive advantage. Moreover, management has also done a great job by driving high growth rates through a blend of organic and acquired activities. Based on the above quantitative and qualitative arguments put forth, I believe that Transcat is an undervalued stock.

Founded in 1964, Transcat, Inc. is a leading provider of accredited calibration services for safety testing equipment as well as a value-added, third-party distributor of professional grade test, measurement and control instruments.

Transcat's competitive advantages can be analyzed using Porter's Five Forces. In essence, Transcat operates in a highly fragmented industry, which is ideal for companies looking to enter and potentially dominate the market. However, Transcat offers a larger suite of services as opposed to these small and new firms. Therefore, Transcat's market share is unlikely to be affected as it is better equipped to capture a wider range of market share. In terms of substitutability, the company has been differentiating its services by providing value-added options such as equipment kiting and pre-calibration services. These allow customers to place their instruments into service immediately upon receipt, boosting their productivity by saving downtime. As a third-party distributor of test instruments, it is critical to recognize that most of the goods that Transcat procures from its suppliers are homogenous in nature. Hence, Transcat is not vulnerable to price exploitation by suppliers as it is able to switch to cheaper options in the event that suppliers increase the cost of goods.

In terms of the bargaining power of buyers, Transcat's customers exist in highly regulated industries like the pharmaceuticals market with high cost of failures. Hence, buyers are likely to opt for companies like Transcat with pristine track records of services since its inception in 1964. This indicates that the demands for Transcat's services are inelastic. Lastly, the company operates in a highly competitive industry with key competitive factors including customer service, lead time, inventory availability, brand recognition, etc. In order to better appeal to clients and address their needs, Transcat has been actively upgrading its infrastructure, such as the newly introduced CalTrak web-based asset management tool. Overall, Transcat has done a great job sustaining its economic advantages, and it is poised to continue to do so in the near future.

Apart from financial multiples, a discounted cash flow analysis was also constructed to analyze the intrinsic value of Transcat (Appendix A). Essentially, the model was constructed by splitting Transcat's two main revenue streams - service and distribution. Taking into consideration management's estimates, a conservative growth rate was applied to both its services and distribution revenue. This was accompanied by flatlining the cost of goods for services. As for distribution, a decreasing cost of goods was projected based on management's strategy to cushion its margin squeeze, such as pivoting into lower-cost expenses like renting of testing machines instead of selling them. Overall, the rest of the factors affecting unlevered free cash flow (UFCF) such as operating expenses as well as non-cash expenses were projected based on averaging the historicals, as there were no distinct factors that stood out which could potentially affect the projections.

Based on Bloomberg's estimate of Transcat's weighted average cost of capital (WACC) at 6.9%, a conservative WACC of 10% was then applied (Appendix B). Subsequently, an exit multiple based on existing EV/EBITDA multiple of 11x was applied to calculate Transcat's terminal value. After discounting its projected UFCF, the implied share price was populated by working towards equity value (Appendix C). Based on the above calculations, an intrinsic value of implied share price for Transcat was $26.59. This represents a potential upside of 29% as opposed to the current share price of $20.65. In order to more accurately account for errors, a sensitivity table of exit multiple versus WACC was also constructed (Appendix D). Lastly, applying a margin of safety of 15%, Transcat's current share price indicates a 14% potential upside. In this case, as Transcat is the only existing public company that simultaneously operates in both the distribution and services segment, public comparables and precedent transactions were not used as methods to populate an intrinsic value for Transcat.

For balance sheet analysis, the company has $0.6M in cash and short-term investments, and $25.3M total debt (10-Q). This indicates that it has a net debt position of $24.7M. While a net debt of that magnitude is alarming, a closer inspection of the debt level revealed that short-term debt accounts for only $2.14M, which is less than 10% of the total debt. This implies that Transcat is unlikely to face a credit crunch in the short run. Moreover, its EBITDA/Interest expense is 18.2x, which is way above the industry's average of EBITDA/Interest expense of 4.1x. Hence, it is safe to assume that Transcat is in a comfortable position to pay off its debt when required. Lastly, it recently announced that it has filed for a shelf registration of secondary equity offerings of up to $50.0M, indicating that it has accessibility to liquidity in the near future for interest expenses or acquisitions.

As for capital allocation, management has been consistently utilizing acquisitions as a key strategy in expanding market share. The key factors driving its acquisitions are based on geographic expansion, increased capabilities, and infrastructure leverage. Since 2009, Transcat has been aggressively acquiring companies in the $500K to $5M annual revenue range on a yearly basis (Appendix D). For example, on September 4, 2018, the company acquired all of the assets of Angel's Instrumentation (AI) for $4.7M. Established in 2000, AI provides calibration services to the manufacturing and maritime industries. The acquisition is expected to strengthen Transcat's position in the mid-Atlantic region and expand its market share. Currently, Transcat does not have a dividend/buyback policy.

In terms of ownership, the management team currently owns 6.2% of total shares outstanding, with institutions and hedge funds owning up to 65%. On November 20, 2018, Director Gary J. Haseley bought an additional 3,500 shares of Transcat. This indicates that the management may believe that the stock is currently undervalued, and its price is projected to increase in the future. In my opinion, the management team consists of good operators who have consistently remained disciplined in their approach to increasing market share. A closer inspection of the management team reveals that they are all seasoned executives with more than 20 years of industry experience. Hence, I believe that Transcat is poised to continue to do well under their supervision.

In closing, Transcat has an attractive business model with a strong economic moat. It is able to sustain its market share by driving operational excellence and leveraging on technology as a competitive advantage. Moreover, management has also done a great job by driving high growth rates through a blend of organic and acquired activities. Based on the above quantitative and qualitative arguments put forth, I believe that it is an undervalued stock. 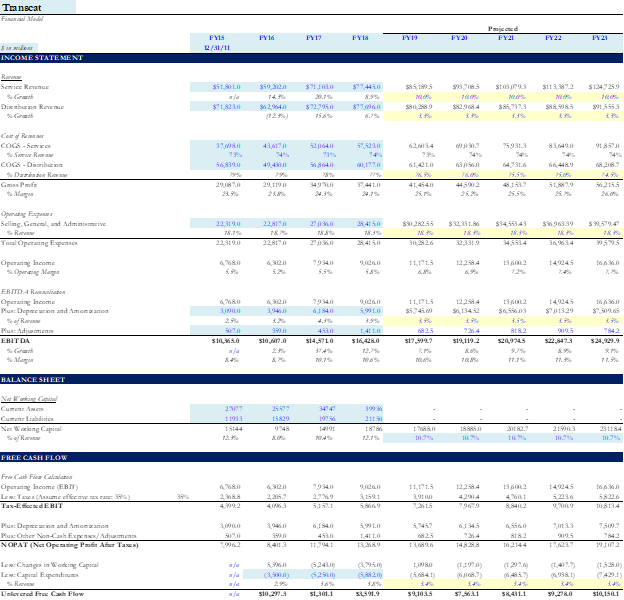 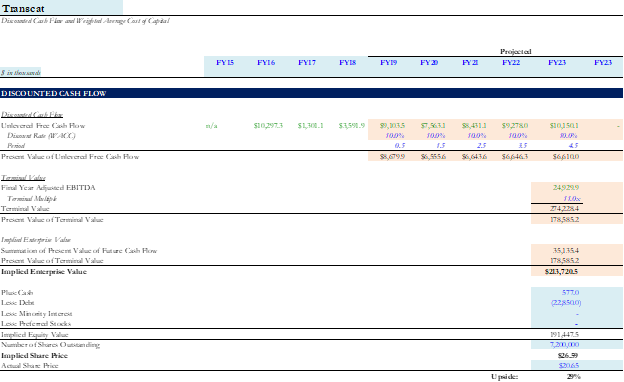 UCLA Bruin Value Investing
325 Followers
Bruin Value Investing is the leading investing group at UCLA with the first and only real money fund on campus. The primary objective of our group is to educate our members, build a knowledge base to understand the investment world, and create a forum in which to share investment ideas.
Follow