Investors should use caution before implementing claims on television about the yield curve. Binary decisions solely made on the shape of the yield curve have not mitigated volatility and drawdowns in the past. Even if past decisions based on the inversion of the yield curve did lead to risk mitigation, this should not be expected on a forward basis due to its popularity and lack of consistency in other countries. 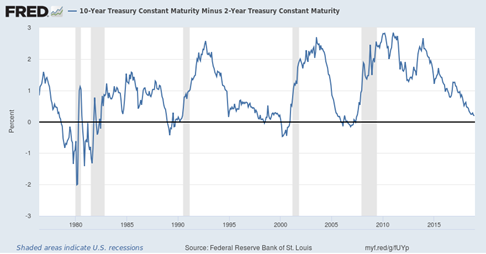 The historical pattern is that the yield curve will invert, return to a normal shape after the Fed indicates cutting rates, and then the economy will enter a recession within the next couple of years. Based on this pattern, an investor might think that an inverted yield curve alone should signal higher forward risks than a normal yield curve in terms of volatility, drawdowns, and negative market returns compared to a normal curve, but this is not the case for the Dow Jones index.

I averaged forward drawdowns, realized 1-month volatility, and returns on one, two, and five-year periods for each trading day from 1976 to 2016 based on the previous day’s yield curve. I then separated these metrics into periods where the ten and two-year treasury spread (yield curve) had a negative or flat spread (inverted curve) and where the spread was positive (normal curve). This means that the average one-year drawdown for normal curve indicates the average one-year forward drawdown on the Dow Jones Index for each trading day where the ten-year yield was higher than the two-year yield.

One of the main risks that investors look to mitigate is drawdown risk. A drawdown is defined as how far down a stock trades relative to its historical high. Long-only investors usually experience large drawdowns during economic recessions. If it were possible for an investor to reliably call market tops and avoid large market drops, they would achieve exceptional returns. 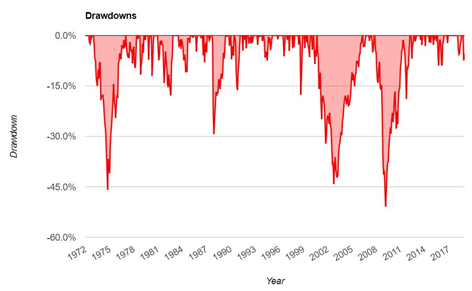 Average Returns Were All Positive

Average returns were different within each rolling period, but this can be attributed to different earnings growth and multiple expansion levels between periods of normalized and inverted yield curves. Although this might seem like investors should expect better returns in a normalized yield curve period, investors should note that every period averaged a positive return and that the returns do not factor in dividends, inflation, or interest rates. 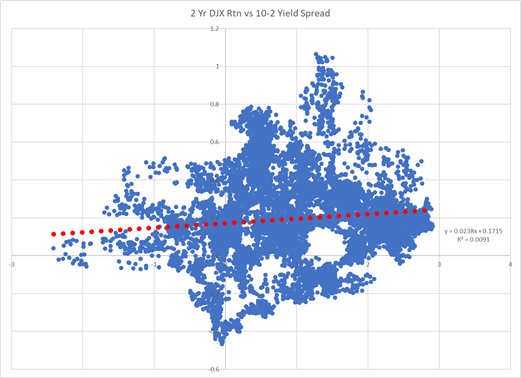 Investors should also note that there is not a significant linear relationship between the yield curve shape and forward two-year returns, with a flat yield curve experiencing worse returns than an inverted curve and an R-squared value of only 0.0091.

Even if investors were to wait for the yield curve to normalize after inverting to cash out of equities, there is an issue with finding an optimal time to re-enter equities. There is also the issue that non-recessionary bear markets and volatility expansions cannot be avoided by simply looking at the yield curve. Lastly, there is an issue with drawing conclusions from a small sample of past data when the index composition and its revenue and cost drivers have changed over the past 100 years and my sample size of over 10,000 trading days only experienced five recessions. Individual investors should instead focus on forward earnings growth and asset allocation rather than timing an equity index with the shape of the yield curve.

Simrit Jhita
41 Followers
Simrit has a strong understanding of top-down analysis, equity valuation, and commodities. He has experience trading and investing his personal money, as a commodities trading intern, and as an investment intern. Simrit has been a Contributing Analyst on Seeking Alpha since April of 2016.

Disclosure: I am/we are long VTI, ITOT, and SPTM. I wrote this article myself, and it expresses my own opinions. I am not receiving compensation for it (other than from Seeking Alpha). I have no business relationship with any company whose stock is mentioned in this article.