Shares have bounced back a little since the start of the new year and Monday's report could set the tone for the financial sector.

Here’s a look at what might be expected from the big bank’s quarterly report.

Citigroup (C) kicks off earnings season and leads the banks, with its report scheduled for before market open on Monday, Jan. 14. 2018 ended up being a tough year for the stock and C ended 2018 down 30%, with about 19% of that decline in December alone. Shares have bounced back a little since the start of the new year and Monday's report could set the tone for the financial sector as the rest of the big banks get ready to report.

For Q4, C is expected to report EPS of $1.61 on revenue of $17.94 billion, according to third-party consensus analyst estimates. In the same quarter last year, EPS came in at $1.28 on revenue of $17.25 billion. Analysts are again expecting lower tax rates and share buybacks to boost the company’s bottom line. In Q3, C reported its effective tax rate was 24% compared to 31% the year prior, and noted it had repurchased 8% of its common shares outstanding over 12 months.

One area that analysts are likely to hone in on is the performance of the North America consumer banking division, which saw revenue decline 1% year over year (YoY) to $5.1 billion in Q3, a negative surprise the company attributed to weakness in retail banking and Citi-branded cards.

Despite that hiccup, analysts were still optimistic on the overall picture as loans were up 3% to $675 billion, deposits increased 4% to $1 trillion, and the bank’s efficiency ratio and return on tangible common equity have continued to move closer towards management’s targets.

There are two parts of the business where investors are planning on some weakness in Monday’s results thanks to CFO John Gerspach’s comments at an investor presentation in December. Gerspach said C’s investment banking division had been impacted by a slowdown in equity issuance as well as a declines in debt underwriting in the fourth quarter.

The investment banking division struggled for the same reasons when the company last reported. In Q3, C reported an 8% YoY decline in revenue to $1.2 billion, with equity underwriting revenue down 17% to $259 million and debt underwriting dropping 9% to $660 million.

The other thing that Gerspach warned about was that revenue from fixed income and equity trading is expected to be slightly lower in Q4 as volatility didn’t boost trading as much as the bank had hoped, especially in its rates-trading business. While volatility is often a boon for bank trading desks, the combination of uncertainty and heightened volatility across asset classes like there has been the past few months can result in investors holding off on making major moves until the dust settles a bit.

Unlike the investment banking division, C’s trading division has delivered stronger results in recent quarters. In Q3, revenue from fixed income markets increased 9% YoY to $3.2 billion and equity markets revenues were up 1% to $792 million. 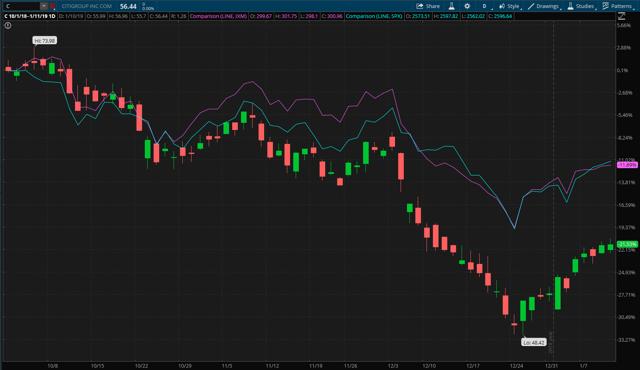 A TOUGHER GO. The last stretch of 2018 hit many stocks hard. C, charted above since the start of the fourth quarter, had a tougher go and ended the year down 30%. The stock has rebounded since the end of December, but shares are still down 21.53% since Oct. 1, compared to an 11.69% decline for the S&P Financial Select Sector Index (IXM, purple line) and an 11.21% decline in the S&P 500 (SPX, teal line). Chart source: thinkorswim® by TD Ameritrade. Not a recommendation. For illustrative purposes only. Past performance does not guarantee future results.

Options traders appear to be expecting a 3.5% stock price move in either direction, based on options data on the thinkorswim® platform. Implied volatility was at the 50 th percentile as of this morning.

In short-term trading at the Jan. 18 monthly expiration, calls have been active at the 57.5 and 60 strike prices. There’s also a significant amount of open interest on the 65-strike calls up through the 85-strike calls, a ways out of the money based on where the stock is currently trading, but more in line with where the stock was at before December 2018. On the put side, recent trading has been concentrated at the 52.5 and 55 strikes. Open interest is elevated at the 57.5-strike puts and the 60-strike puts as well.

Looking at the Feb. 15 monthly expiration, much of the trading has been right around where the stock has been trading at. Calls have seen higher volume in recent trading at the 57.5 and 60 strikes, while activity for puts has been concentrated at the 52.5 and 55 strikes.

TD Ameritrade® commentary for educational purposes only. Member SIPC. Options involve risks and are not suitable for all investors. Please read Characteristics and Risks of Standardized Options.