However, as we’ll see in this article, the long-term effect of such an interception shouldn’t affect the company’s long-term growth plans. 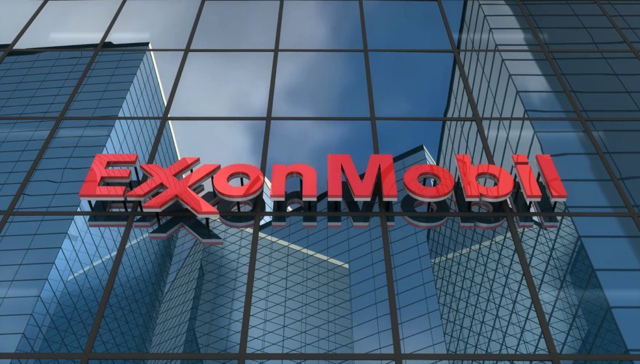 Guyana is a significant part of Exxon Mobil’s growth plans. Exxon Mobil has increased recoverable resources here to >4 billion barrels, which the company believes provides >10% return at $40 / barrel. The company is focused on a low-cost development using proprietary technology. The company plans to drill 5 exploration wells in 2018, with 20 addition prospects.

The company recently made its 9th discovery and mobilized its third rig in October. The company anticipates the asset will first come online in 2020 and grow production to more than 800 thousand barrels per day by 2026. Several hundred thousands of these barrels will be directly attributable to Exxon Mobil. That means this asset will support an almost double-digit increase in the company’s production.

The above graph shows Exxon Mobil’s Guyana plans in detail. The company plans to start production in 2020 at just over 100 thousand barrels per day. The company anticipates production almost tripling by 2022, doubling again by 2024, and going up by another 20+% by 2026.

This discovery alone could result in Exxon Mobil’s production increasing by more than 10% by 2026. At the same time, the low cost of this asset could make it a significant cash cow for Exxon Mobil. Assuming a $35 breakeven (i.e., the 10% return at $40 per barrel we saw above) and prices of $60 per barrel, this asset will provide Exxon Mobil with $3.5 billion in annual income by 2026.

To understand the details of the potential impacts of the decision and the worst-case scenario, we need to begin by discussing the history between Guyana and Venezuela. Guyana was originally a British territory, while Venezuela was a Spanish territory. 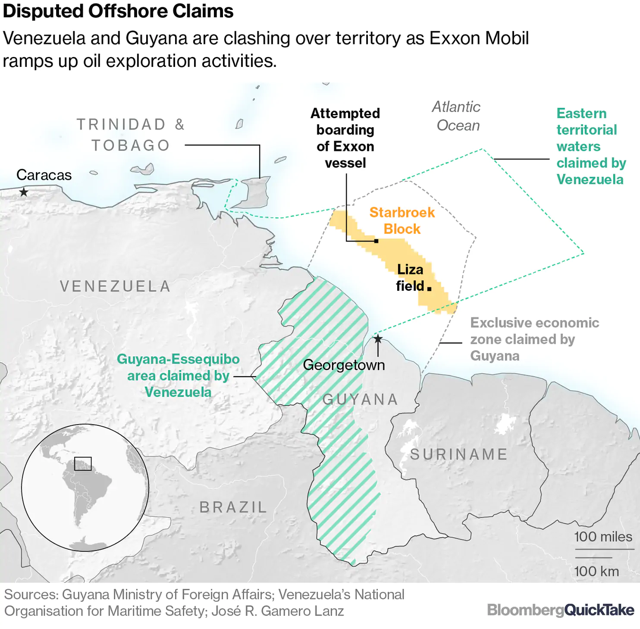 At the same time, Venezuela laid claim to a massive portion of Guyana’s territory. It’s ironic how millions of Venezuelan citizens are fleeing its country, yet Venezuela is more worried about stealing another country’s territory. Currently, Venezuela claims an astounding two-thirds of Guyana’s land area. That significant area is effectively the entire western-half of Guyana.

At the same time, Venezuela has claimed a massive amount of territorial waters. If you’ll notice, these territorial water claims are strategically made to cover the majority of the Stabroek block. Personally, this reminds me of China’s massive territorial claims designed to cover potential commodities in the South China Sea.

While such territorial claims might seem unimportant, it’s important to note that Venezuela’s military is significantly larger than Guyana’s and the country’s navy could easily bully Exxon Mobil.

At the same time, this territorial dispute was originally settled in 1899 where Guyana (at that time a British territory) won the dispute. As a result, any attempt by Venezuela to move into Guyana would likely be responded too in the same way as Iraq’s attempted claim over Kuwait that led to the Persian Gulf War.

For reference to how that turned out, on the first day of the war, Iraq had the fourth-largest standing army in the world. By the end of the first week, Iraq didn’t even have the largest army in Iraq. There were more U.N. troops there.

Exxon Mobil and Venezuela don’t have a great history either. In 2007, Venezuela seized Exxon Mobil’s assets in the country. Exxon Mobil then sued Venezuela for the $1.6 billion in assets it lost plus billions more in the potential value of the assets that it had. Exxon Mobil won close to $1 billion in the judgement, however, it’s pretty hard to get money from a dictatorship.

This poor history could make Exxon Mobil reluctant or more careful to deal with Venezuela in the future. The company might be reluctant to build up its Liza assets with the risk that Venezuela could grab them again. While unlikely, Venezuela is desperate for revenue and might choose to seize an asset producing hundreds of thousands of barrels of oil. This is unlikely, but a risk.

Now that we’ve discussed the situation, let’s look at what I believe to be a potential realistic worst-case scenario. 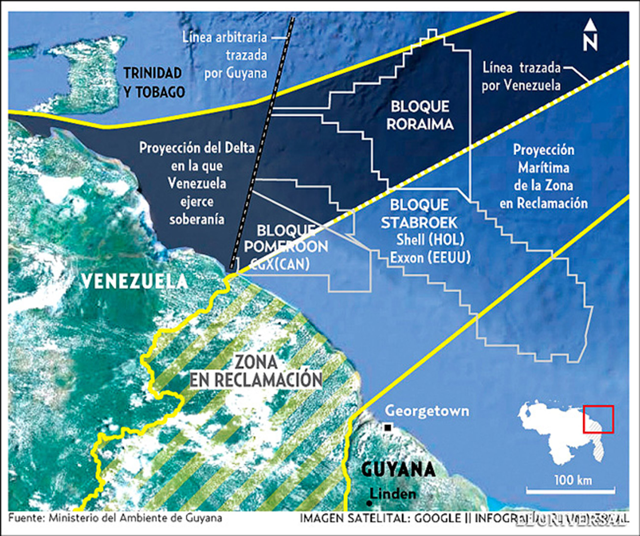 The above map (unfortunately in Spanish) shows three different regions. The first in darkest blue with the yellow lines is Venezuela’s projection of its territorial waters from its current territory. This is where I believe the realistic worst-case scenario lies. Since it’s based off of Venezuela’s current territory, Venezuela might choose to actively seize this entire territory.

For reference, this is where the seizure of Exxon Mobil’s ships occurred.

Personally, I feel that Venezuela, without a win in the international U.N. court will never win this block. Attempting to take it from Guyana by force would not be supported, especially given Venezuela’s current poor international status. At the same time, I find it unlikely that Venezuela will win in court given that the last 1899 ruling was already won by the British.

More so, traditionally the high court of the U.N. has supported smaller countries in their claims. I feel the court would be reluctant to give away two-thirds of another country’s territory, especially to a country that’s failing to support its own citizens.

Personally, I believe the realistic worst-case scenario is Exxon Mobil losing the western part of its exploration block based on the current national waters claim based on Venezuela’s current territory. That would mean that Exxon Mobil loses some potential upside, but continues to hold onto the production potential and current assets that it has already found.

One final thing that I want to leave off on is the opinions of other countries. As the United States Freedom of the Seas operations show, having a powerful country on your side can be a significant help.

In response to the recent excursion by Venezuela, the U.S. government has stated, “sovereign right to develop those resources, which includes allowing ships to go about their business doing surveys and other seismic activities.” This means that the U.S. government supports Guyana on this.

At the same time, Exxon Mobil has made a smart move by getting China as a partner on the project. China is one of the few countries left that’s willing to do business with Venezuela and China could also use potential revenues from the coast of Guyana. As a result, should Venezuela interfere with the project, China could put pressure on Venezuela.

The importance of China’s impact can be seen in the fact that China is one of the few countries still willing to lend to Venezuela, recently lending the country $5 billion.

I just want to finish up here with some direct investment implications. For Exxon Mobil, in an absolute worst-case scenario where the company loses the entire asset, this will likely lead to a 10% or so drop in Exxon Mobil's stock price based on anticipated production from the asset. This depends on when the issues happen, whether it's before Exxon Mobil has invested significantly.

However, the potential larger loser in this is Hess Corporation (HES), which has made Guyana an even larger part of its growth plans. At the same time, Hess Corporation is currently struggling to make money, meaning a Guyana shut-down could be much more significant. In such a scenario, I could see Hess Corporation's stock price dropping by 20+%.

I still see Hess Corporation as a strong investment though, see more about that in my article here.

Despite this, I feel that the issue has been overplayed. Even if Venezuela were to gain control of the western-half of Exxon Mobil’s territory, that won’t affect the company’s production plans. For Venezuela to gain more, it would have to invade Guyana. I find such an invasion to be incredibly unlikely, and believe that both China and the United States will respond.

The Value Portfolio focuses on deep analysis of a variety of companies across a variety of sectors looking for alpha wherever it is to maximize reader returns.

Disclosure: I am/we are long XOM, HES. I wrote this article myself, and it expresses my own opinions. I am not receiving compensation for it (other than from Seeking Alpha). I have no business relationship with any company whose stock is mentioned in this article.