A long time ago on TV, on both sides of the Atlantic, there was a comic review of the current news titled "The Week That Was" or TWTW. Occasionally, news and commentary of significance are bunched into one week, as happened this past week. The items they covered may be of serious significance for 2019 and beyond.

One Day, One Week, One Month, One Year

Some of the US stock market followers can point to instances where the first day of the year market performance predicts the first week, which predicts January's results, and in turn, forecasts the calendar year. They have some statistics to support their view. At any rate, both the first trading day of the year and the first full week of the year produced gains for the leading stock market averages. After surviving a year where only cash produced a positive rate of return of the main asset classes, one can hope that 2019's results will have a plus sign ahead of it. With that thought in mind, the following mutual fund performance table could address the question of magnitude for 2019's results: 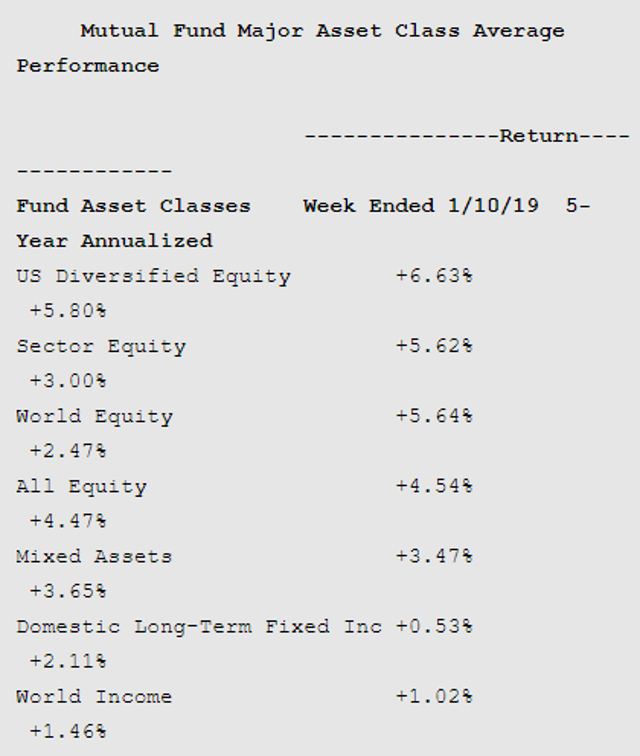 Remember, the numbers above are not our predictions, they are a look at history. There were much better results over the past ten years because during this period we saw multiple expansion. The only way for the numbers above to be achieved is for further expansion of the market multiple, assuming the optimistic projections coming out of Washington. With the current size of sales forces contracting it will be difficult unless societies (governments and Private Sector) meaningfully address the growing retirement capital deficit, even assuming the optimistic projections coming out of Washington.

I recognize that absolutely none of the readers of this blog are average investors or investment managers, but there is still hope for you and your accounts to do much better. Barron's each week publishes a list of the 25 leading mutual fund performers for the week, sourcing my old firm now housed in REFINITIV. For the week, these 25 funds had gains of 19.45%-12.43%. (In eleven instances, the funds had stablemates on the list.)

In analyzing the 2018 results, several deeply-held attitudes probably contributed to the poor results:

1. Ken Rogoff is quoted as saying "Over the course of this year and next, the biggest economic risks will emerge in those areas where investors think recent patterns are unlikely to change." His lists include:

My concern is a data-dependent world where the numbers are incomplete and wrong due to disruptive technology, increased under-reported transactions, poor data gathering, data expenses that are too low, "sound bite" analysis, and surprises.

2. The Historically Speaking Column in the Weekend WSJ briefly reviewed several financial panics going back to ancient Rome and government reactions to them. The column concludes "the only thing more frightening than a financial crisis can be its aftermath." In many cases, the crisis was created by leadership trying to extend a tiring expansion beyond its "normal life."

The solutions applied were an unwise attempt to prevent a repeat of the problem without recognizing the series of faulty decisions made by leadership. This included punishment of unpopular sectors and people rather than an attempt to guide better judgement and the rebuilding of appropriate reserve elements, which could have been quickly and expertly mobilized.

3. Gallop regularly measures the public's view of the honesty and ethical standards of various occupations. Of the 20 occupations reviewed, by far, the highest esteem goes to Nurses. The following table shows the ranking of the professions we deal with as part of our professional lives: 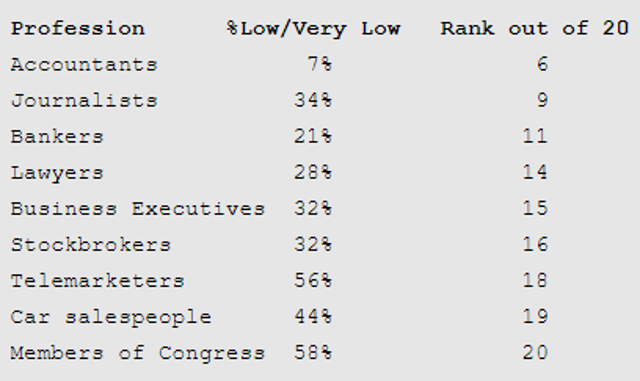 Similar surveys are probably done in most countries. These public attitudes are probably similar worldwide and represent a major constraining force in the development of a modern financial community where we ask people to trust both our integrity and our wisdom. My fear is that during some future economic crisis, the unpopularity of the government will lead to an upheaval that promises more honesty and efficiency, but in the end doesn't deliver on those promises. As bad as our current delivery system is, it will produce better results than any other long-term system. What we need to do is make it much better.

Mike Lipper, CFA
1.05K Followers
A. Michael Lipper is a CFA charterholder and the president of Lipper Advisory Services, Inc., a firm providing money management services for wealthy families, retirement plans and charitable organizations. A former president of the New York Society of Security Analysts, Mike Lipper created the Lipper Growth Fund Index, the first of today’s global array of Lipper Indexes, Averages and performance analyses for mutual funds. After selling his company to Reuters in 1998, Mike has focused his energies on managing the investments of his clients and his family. His first book, MONEY WISE: How to Create, Grow and Preserve Your Wealth (St. Martin's Press) was published in September, 2008. Mike’s unique perspectives on world markets and their implications have been posted weekly at Mike Lipper’s Blog since August, 2008.