Understanding the semiconductor capital equipment industry can be daunting for investors who are new to this sub-industry.

There are essentially two types of chips: Memory and logic.

I provide a high-level overview of how chips are manufactured from silicon wafers.

The following article is an excerpt from a recent Premium Edition of the True Vine Letter.

If you do not know anything about semiconductors and you listen to a presentation by a semiconductor capital equipment company, you will quickly be lost. I know because I was there before. Management continuously rattles off terms like logic, foundry, DRAM, NAND, fab, wafer, etc. I said to myself, “what are these guys talking about?!?!” Eventually, I had to do a deep dive into the industry to understand it which included reading an entire book about it.

The semiconductor industry manufacturers integrated circuits (“chips”) for a variety of electronics, including computing devices, network equipment, and storage devices. The rise of new technological advancements such as autonomous vehicles, big data analytics, edge computing, immersive devices (e.g., virtual reality), internet of things, machine learning, robotics, and so on are not only requiring more chips but continually more advanced chips. This is good business for companies who make the equipment to advance chip technology. Furthermore, China is investing aggressively in all these new technologies which also is increasing the demand for semiconductor equipment.

The following presentation slide shows the broad opportunity set for the semiconductor industry in this new “data” era: 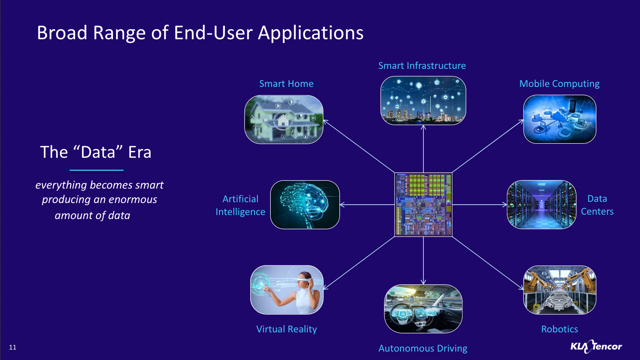 This slide shows the expected revenue growth out to 2025 for the end markets of the semiconductor industry: 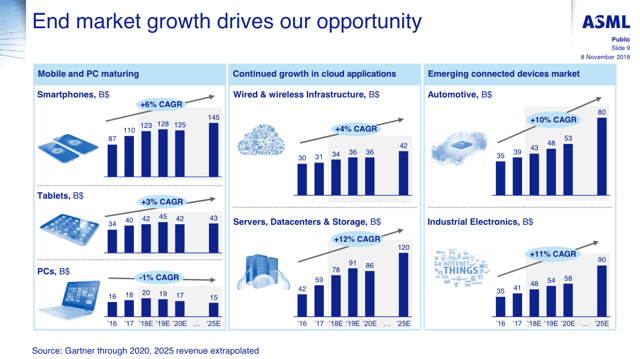 You can see from this slide that the No. 1 growth driver for the semiconductor industry is servers, datacenters and storage which is being driven by the rise of cloud computing.

These growth drivers are adding up and semiconductors are increasingly becoming a larger part of the world economy, as this slide shows:

Semiconductors are an important growth business and semiconductor capital equipment is an essential sub-industry worth understanding.

At a high level, there are two types of chips that are commonly produced by semiconductor manufacturers like Intel (INTC), Micron (MU), Samsung (OTC:SSNNF, OTC:SSNLF), SK Hynix (OTC:HXSCF; OTC:HXSCL), and Taiwan Semiconductor (TSM). These are memory and logic. Let's take a look at each of these.

Memory chips are used to store data electronically in the form of bits (8bits = 1 byte). The most common types of memory chips made by the industry today are Dynamic Random Access Memory ("DRAM") and NAND flash. DRAM is volatile memory, which means it temporarily stores each bit of data in a separate capacitor while the associated device is powered on. DRAM is commonly used by data servers and mobile devices. NAND (short for NAND flash) is non-volatile memory ("NVM"), which means it stores data even if the power is switched off. It's called NAND because it's a type of memory that resembles the NAND (not-and) logic. NAND is commonly used in memory cards and solid state drives ("SSD"). The major trend in memory today is the switch to three-dimensional (3D) memory where memory cells are built vertically, instead of horizontally (planar), which increases memory bit density.

Logic chips are the fundamental building blocks for digital electronics. Logic chips are constructed from connecting individual digital logic gates that perform logical operations of AND, OR and NOT on binary numbers. (This is where the NAND or not-and comes from). Logic chips perform calculations that drive computer processing.

Chips are constructed from wafers of silicon in the clean rooms of fabrication facilities (“fabs”). These wafer fabs are sometimes referred to as the “front end” of the production process. Fabs are very expensive to build because these clean rooms are something like 1,000 times cleaner than a regular room with constant air circulation so that no speck of dust gets on the wafers.

Here's how KLA-Tencor (NASDAQ:KLAC) described the semiconductor fabrication process in their most recent annual report:

The semiconductor fabrication process begins with a bare silicon wafer — a round disk that's typically 200 millimeters or 300 millimeters in diameter, about as thick as a credit card and gray in color. The process of manufacturing wafers is in itself highly sophisticated, involving the creation of large ingots of silicon by pulling them out of a vat of molten silicon. The ingots are then sliced into wafers. Prime silicon wafers are then polished to a mirror finish. …

The manufacturing cycle of an IC is grouped into three phases: design, fabrication and testing. IC design involves the architectural layout of the circuit, as well as design verification and reticle generation. The fabrication of a chip is accomplished by depositing a series of film layers that act as conductors, semiconductors or insulators on bare wafers. The deposition of these film layers is interspersed with numerous other process steps that create circuit patterns, remove portions of the film layers, and perform other functions such as heat treatment, measurement and inspection. Most advanced chip designs require hundreds of individual steps, many of which are performed multiple times. Most chips consist of two main structures: the lower structure, typically consisting of transistors or capacitors which perform the “smart” functions of the chip; and the upper “interconnect” structure, typically consisting of circuitry which connects the components in the lower structure. When all of the layers on the wafer have been fabricated, each chip on the wafer is tested for functionality. The wafer is then cut into individual chips, and those chips that passed functional testing are packaged. Final testing is performed on all packaged chips.

There are three primary aspects to manufacturing chips at the front end. These are deposition, lithography, and etch and clean. All three of these aspects require process control. At a very high level, this is how it works:

These processes are repeated to create the chips on the wafers before elements are finally added to form transistors. Throughout these processes, process control equipment is used for inspection and metrology (measurement) to remove defects and increase yields (i.e., increase the number of usable chips).

Deposition, lithography, etch and clean, and process control are the primary component categories of wafer fabrication that the semi-cap companies specialize in making equipment for. Roughly 85% of the capital expenditures made by chip manufacturers for semiconductor equipment goes toward wafer fabrication equipment (WFE). Thus, most of the semi-cap industry conversation revolves around the main producers of wafer fab equipment.

(Note: these market share estimates came from my April 2016 article and have been updated based on more recent company reports and presentations.)

In 2017, WFE capex crossed the $50 billion threshold for the first time, as shown on the left-hand side of the following slide: 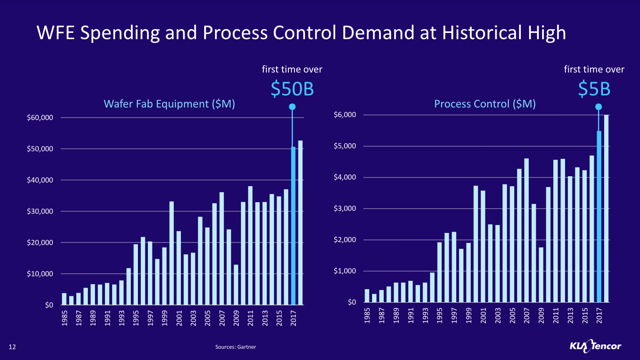 The remaining 15% of the semi-cap industry capex comprises the“backend” of chip production which includes testing wafers, cutting the wafers into chips, and packaging the chips. The primary 2 components of the back end where semi-cap companies also compete can best be described as test and packaging.

There are three categories of chip manufacturers that buy equipment: Logic, memory, and foundry. Here's what each of these categories represents:

Semi-cap companies reference these three types of customers in their financials and other investor materials.

I hope you found this overview of the semiconductor capital equipment industry helpful. Semi-cap companies are the behind-the-scenes producers of the tools used to create the building blocks that underpin the new technologies of our modern era. They provide a unique outlet for investing in the technology sector.

I'm an investment advisor and owner of True Vine Investments, a Registered Investment Advisor in the State of Pennsylvania (U.S.A.). I screen electronic communications from prospective clients in other states to ensure that I do not communicate directly with any prospect in another state where I have not met the registration requirements or do not have an applicable exemption.

Any investment advice or recommendations involving securities referenced in this article is general in nature and geared towards a readership of sophisticated investors. This article does not involve an attempt to effect transactions in a specific security nor constitute specific investment advice to any particular individual. It does not take into account the specific financial situation, investment objectives, or particular needs of any specific person who may read this article. Individual investors are encouraged to independently evaluate specific investments and consult a licensed professional before making any investment decisions.

All data presented by the author is regarded as factual; however, its accuracy is not guaranteed. Investors are encouraged to conduct their own comprehensive analysis.

Positive comments made regarding this article should not be construed by readers to be an endorsement of my abilities to act as an investment advisor.

Additional disclosure: KLAC is a holding in client portfolios. I have an economic interest in the stock.

Follow Joshua Hall and get email alerts
+
Add a comment
Disagree with this article? Submit your own.
To report a factual error in this article, click here.
Your feedback matters to us!