The earnings season is almost here, and Advanced Micro Devices (NASDAQ:AMD) is expected to report its Q4 earnings in the next 3 weeks. While some believe that AMD’s sales will plunge further, as the semiconductor super-cycle might be over, others are hopeful that the chipmaker would outperform its guidance once again. But rather than just focusing on the company's headline figures, investors should pay close attention to its ASPs, market share gains, OEM wins and its revenue figure for Q4, as these items are likely going to determine where its shares could be headed next. Let’s take a closer look to have a better understanding of it all. 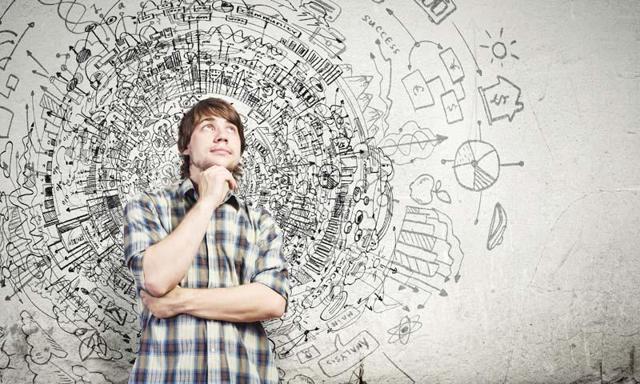 One of the major factors that really hampered AMD’s financial growth over the past several years has been the fact that its silicon wasn’t competitive, and so, the chipmaker had to resort to deep discounting to make its SKUs competitive on a performance-per-dollar basis. But since the wide-scale rollout of its Zen-based chips, AMD gained pricing power and it didn’t have to compete merely on price in order to attract customers.

The chart attached below would illustrate that the company’s average selling prices (ASPs) and its volume shipments within its computing and graphics segment have both grown at considerably higher rates since the beginning of 2016 on a year-on-year basis. Being able to sell more product, at higher prices, only goes to suggest AMD’s growth is being bolstered by its performance competitive products and that the chipmaker isn’t reliant on deep discounting anymore. That’s actually the hallmark of a perfectly healthy growth company. 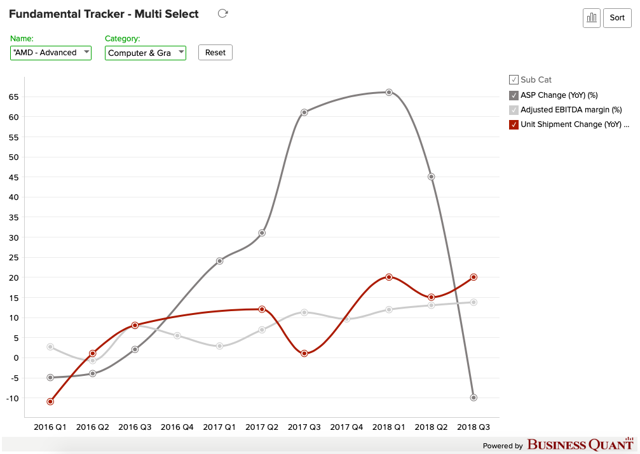 However, it would be unreasonable of us to take these sizable ASP growth rates for granted and expect past trends to continue in the future as well. For instance, the chipmaker posted a 10% decline in its computing and graphics ASPs in its Q3. AMD management noted during the latest 10-Q filing that Radeon products saw some price erosion during the quarter, which weighed on the company's overall ASPs. From its latest 10-Q:

This is an important factor for AMD. An ASP decline wouldn't be an issue if the chipmaker was moving to a lower-value but more profitable product mix. However, a sustained decline in its overall ASPs in tandem with shrinking margins would be bad for the company. Sure, the chipmaker would adopt cost reduction measures in order to preserve its margins, but fabless manufacturers only have a limited room when it comes to cutting costs. So, investors should monitor AMD's margin and ASP trends in Q4 earnings.

I personally believe that its overall ASPs would change by +5/-5% during Q4 year on year, as:

So, I would recommend readers and investors to closely monitor how AMD’s overall ASP and profit margin (like adjusted EBITDA margin) trend in Q4.

Next, Intel has been facing CPU supply shortages in the past quarter, as its 10nm output ramp hasn't been as smooth as its engineers, management or even its shareholders had previously hoped. So, it would be interesting to see if AMD was able to meaningfully capitalize on this opportunity.

Now, Intel strategically allocated production lines to manufacture higher-value SKU opportunities, while leaving the lower end of the market, until its supplies normalized. Robert Swan of Intel noted during the Credit Suisse conference:

So, we spent a billion and a half more capital this year to ramp more 14 nm capacity. We’ve redeployed some of our 10 nm equipment that we had back to 14 nm. So, we’re getting more output and we’re tackling the constraint problem to make it go away as quickly as we possibly can.

However, I believe this is where AMD may have gained market share during its Q4, in sub-segments within the x86 market.

For instance, OEMs such as HP Inc. (HPQ), Acer and Dell (DELL) would’ve been faced with the choice of missing their sales targets because Intel was supply-constrained, or partly sourcing AMD’s Ryzen to ease out the supply crunch. It makes business sense to go with the latter, unless the OEMs are providing machines for niche workloads. Here's an instance of how this situation is helping AMD.

Lisa Su had noted on the company's Q3 call that AMD was already experiencing a lot of success in the OEM channel:

“Ryzen mobile processor unit shipments doubled sequentially for the second straight quarter as OEMs ramped production of their latest AMD-based notebooks. 54 of the 60 Ryzen processor-based notebooks planned for 2018 have launched with the final notebooks expected to go on sale this quarter. Based on the success of first-generation Ryzen mobile notebooks, the expanded breadth of our customer engagements and our design win momentum, we are on track for an even larger assortment of AMD-powered notebooks in 2019.”

I believe that Intel’s continued supply shortage should, at least in theory, allow AMD to gain more market share at the OEM level. So, investors should keep a close eye on this potential catalyst when the chipmaker hosts its upcoming earnings call. This could be a big positive for AMD, as OEM-driven revenue tends to be recurring in nature, while retail channels generally are not.

With that said, it’ll all boil down to how AMD’s sales figure trended in the quarter. Management is expecting the company's Q4 revenue to be between $1.4 billion and $1.5 billion, implying a mid-point guidance of $1.45 billion. This would mark 8% growth in sales on a year-on-year basis (ASC 606).

However, I believe the chipmaker would be able to outperform this sales figure broadly because it stands to take advantage of Intel’s supply crunch. To put things in perspective, Lisa Su had noted on the Q3 call:

As it relates to the current supply environment, we did see some pockets of constraints in the supply chain around PCs. We saw that towards the end of the third quarter. We are increasing our production such that we can satisfy some of that demand. And I think that's a short-term statement. But I think on a mid-term statement, it's an environment where we're partnering very closely with our OEMs to make sure their requirements are met.

So, technically, AMD stands to outperform its own guidance target issued about 2.5 months ago if:

Therefore, readers and investors should keep an eye out on this aspect of the company’s business when it reports Q4 earnings later this month.

AMD may have had a tough Q3, but it has several catalysts ahead that can potentially drive its overall growth higher in Q4 FY18 and beyond. Hence, readers should closely monitor changes in its ASPs, market share and OEM wins, as these items are going to dictate the company's growth trends for 2019. With that said, I believe that shorting the scrip may prove to be a very risky proposition, as its actual sales could come in higher than the guided figure if the chipmaker is able to capitalize on the CPU shortage situation. Good luck!

Business Quant
23.37K Followers
Business Quant is a comprehensive investment research platform. It hosts KPI data, financial data and analytical tools to help you become a better investor. You don’t have to go through boring SEC filings to keep a track of AT&T’s subscriber count, Apple’s revenue from iPhones or Disney’s revenue by region. Our Granular KPI Data tool does that for you and it does so much more. Get an edge over the market, from day one. Watch Business Quant in action here.