Since the beginning of time, silver has fascinated people around the world. The metal has been the subject of various religions, a tireless tool of trade, a shiny sign of wealth, and a unique metal whose very special properties have made it stand out from its peers.

Here are 10 reasons why silver's luster will be brighter than gold in 2019.

The Magic of Silver 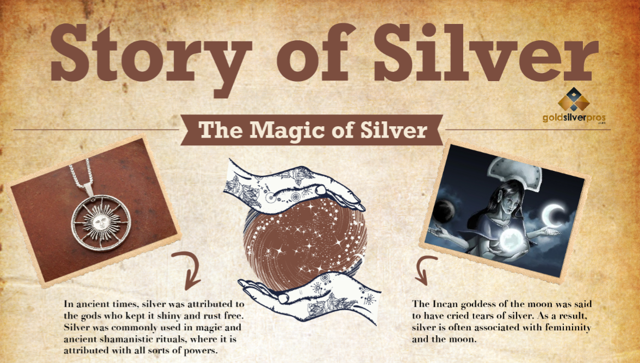 The history of silver starts with magic. Silver has been associated with magic because it never rusts, does not react with other substances, and keeps food and water fresh and pure. Many people used it in shamanistic rituals. It has been in fact associated with the gods because it did not seem to tarnish and wear over time like the other metals.

Its special properties were associated with supernatural powers, where mystic literature claims that werewolves and vampires should be killed with silver. It is also believed to deflect harmful spirits and energy.

Silver’s reflectivity and color is symbolic of the moon. The Incan goddess, Mama Killa (translated as Mother Moon), is goddess of the moon and is said to cry silver tears. Silver has been therefore always been associated with femininity, as well as both the lunar and menstrual cycles.

The noble metal silver has a vast set of uses in industry, for adornment, and for a wealth savings vehicle. Below is a detailed look at the many incredible ways in which society has found to utilize silver’s unique properties. 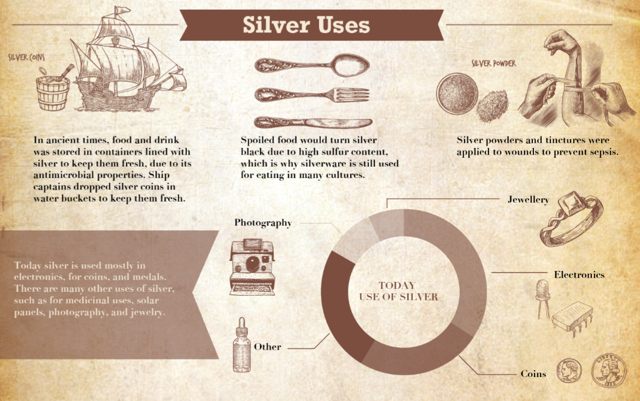 Silver is mainly used for electronics and electrical wire and connections. 36 million ounces of silver is used in the automotive industry for electrical contacts in power windows and battery connections.

Silver is present in computers, mobile phones, televisions, DVD’s, long-life batteries, and many other types of technology. Silver is used in ball bearings that need to withstand high levels of heat within engines. Silver is used in flexible computer screens and LED lights. Perhaps the most popular use of silver is in solar panels, an industry which has exploded in popularity in recent years.

According to geology.com, a leading geoscience news magazine:

The number one use of silver in industry is in electronics. Silver’s unsurpassed thermal and electrical conductivity among metals means it cannot easily be replaced by less expensive materials.

Silver was recognized for its antimicrobial properties for food and medicine though ancient peoples had no knowledge of science or biology. Silver powders and tinctures were often applied to wounds to prevent spread of infection and sepsis.

The Romans knew that putting a silver coin in a barrel of water would result in less men getting sick during travel. As such, silver was dubbed a noble metal worthy of the finest of soldiers, kings and gentleman alike.

Today silver is used as an antibiotic coating on medical devices to prevent contamination, used in wound dressings to prevent infection, included in creams to cleanse scrapes and wounds, and is even bottled in ionic solution to be used as an immune system booster.

Silver compounds have been used externally as antiseptics such as in eye drops to prevent conjunctivitis. Further, dermatologists often use silver nitrate in stick form to treat corns and warts.

Silver has been used in surgical implements, such as bone prosthesis, reconstructive orthopedic surgery, as well as cardiac devices. Silver has historically been used in dentistry as fillings, mixed with mercury. The dangers of mercury have caused alternative filling material to be developed, but silver is still considered safe for dental use.

Silver is minted into coins and medals for investment. The US Mint has sold millions of ounces of American Silver Eagles in recent years. In September, the US Mint announced a temporary stoppage in the production of Silver Eagles due to running out of silver in storage.

According to Popular Photography, silver is what enabled photography to be used by anyone.

Created at the end of the 19th century, gelatin silver processing was the first time that the bromide and silver used to make light sensitive material, appeared in a single solution. It transformed what had always been a two step process into a single step, making photography more accessible for everyone.

…The solution was eventually applied to paper and film and in 1888 when the Kodak Camera was invented, photography became something in which the general population could participate.

This video from the Royal Society of Chemistry explains how silver chloride is used in photography. As light is shown onto paper with silver chloride, the chloride product darkens and turns into silver, which leaves an imprint on the paper that wasn’t there before.

It has been speculated by many that silver use in solar panels will be reduced with copper and aluminum being used as substitutes. Despite these claims, a study commissioned by the Silver Institute noted:

However CRU’s analysts state silver’s unmatched electroconductive qualities mean there is a “physical limit” on the possibility of further reducing silver loadings in cell production, as efficiency losses outweigh the benefits achieved from cheaper raw materials such as copper or aluminum.

Due to the relatively scare nature of silver, industries will continue to look for silver substitutes where they can, even though most substitutes fail to replicate all of the important features that silver provides us. Per the US Geological Survey, silver substitutes are being developed in the following technologies.

In photography, digital processing and silverless black and white technologies are actively being developed and refined. Surgical pins are being made of stainless steel, titanium, and tantalum. Many of us have already substituted stainless steel instead of silver for flatware, mainly for price considerations. In some cases, non-silver batteries are being developed to reduce the amount of silver needed for battery technology. Aluminum and rhodium are replacing silver in mirrors and reflective surfaces.

On the same token, silver is being developed as a replacement for more expensive palladium and platinum for automotive catalytic converters for off-road vehicles.

The history of silver as money over the last 6000 years can be summed up as follows. From Ancient Mesopotamia to the US Constitution, silver has been the longest running metallic money standard in world history. 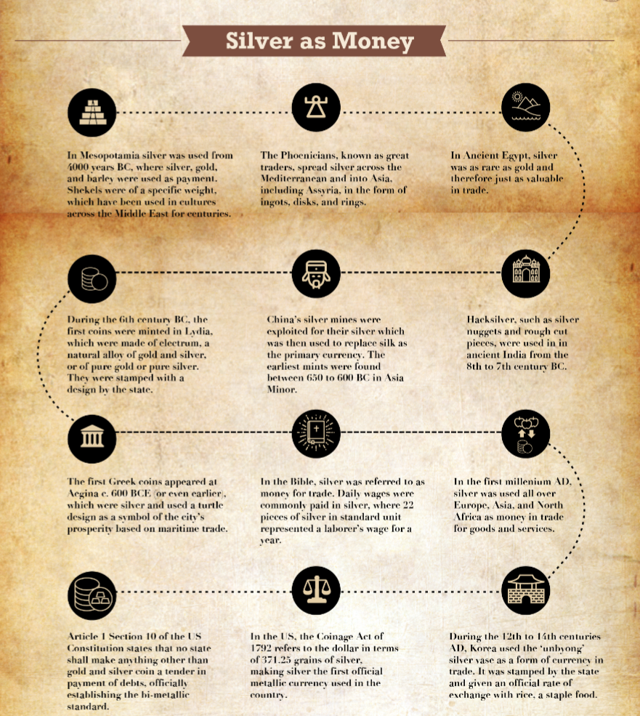 Silver has an interesting production profile because most of the silver produced in the world is not from primary silver mines, but instead where silver is the byproduct of some other product that is being sought after.

In fact, about 30% of annual supply comes from primary silver mines while about 36% is produced at lead and zinc operations. Further, 20% of silver production actually comes from mines where copper is the primary product.

Only six of the top 20 producers are primary silver miners. Overall, there are 12 primary silver mines in the world that have provided data on operations. Those poly-metallic ore deposits in which much of silver is recovered make up about 2 out of every 3 ounces of silver produced on a yearly basis. 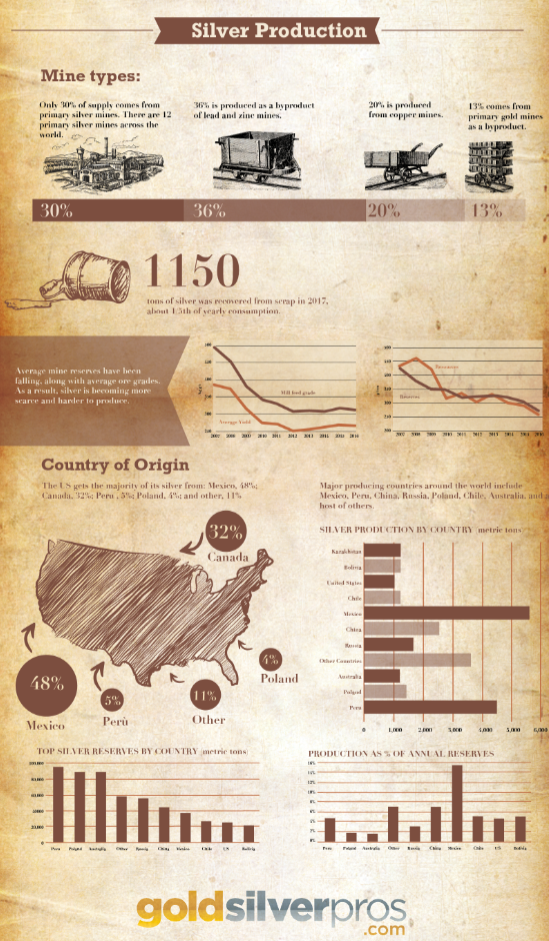 Silver’s Declining ore grades and mill yields are falling, suggesting that silver production will become more costly, pushing up the floor of the potential silver price. Per a study performed by MDPI out of Basel, Switzerland, ore grades and mill results have been falling for some time suggesting that we may have, at least temporarily, reached the end of cheap and abundant silver reserves.

When both the ore grade quality in the ground, and the resultant yields from the mining process are both falling, a strong signal is being given that silver is less abundant and about to get more expensive. Considering all of the wonderful uses of silver outlined in this article, where substitutes have only been marginally successful in replacing silver in certain uses, it is very likely we are about to see more expensive silver prices in the very near future.

Here are the top ten reasons why silver will shine brighter than gold in 2019.

So if you trying to decide which precious metal is more valuable moving forward, then I say pick silver! But really, you can't go wrong with either one of them.

Robert Kientz
2.8K Followers
Author of DropShadow and founder of Gold Silver Pros @ goldsilverpros.com.I have been analyzing the precious metals markets for over 10 years, and have built relationships with many experts in the field which include miners, geologists, and analysts. My site is dedicated to providing you professional research on the precious metals market.I have spent over 20 years working in the technology sector as both an IT and information security professional. I have a Masters degree in Information Assurance & Security, a Bachelors in Business with an MIS concentration, and an Associates in Applied Sciences in Unix Administration and Cisco Networking. I began my investing career over 16 years ago while completing several investment advisory exams - Series 3, 6, 63, and 7 covering the commodities, insurance, and stock markets. After watching the 2008 recession calamity, I began deep research into the economy and markets where I found solace in the writings of Austrian economists whose theories accurately predict and analyze the issues surrounding currencies and financial crises. I then wrote a book, based upon my own extensive research, entitled Dropshadow: The Truth About the Economy, which is available on Amazon.Shortly after writing the book, I began writing for Seeking Alpha and other online outlets on economic and financial topics and issues. I have focused my market research writings on Seeking Alpha since 2018.In 2018, based upon my deep research into the precious metals, I launched my personal newsletter service for investors @ www.goldsilverpros.com where I provide precious metals investors with research updates and insider intelligence in order to help them better invest in those markets.

Additional disclosure: I own silver.