Cannabis stocks took a break from the 2-week rally that lifted the entire cannabis sector across the North American markets.

The two largest ETFs were flat as HMMJ rose 0.2% and MJ gained 0.8%; both ETFs remain substantially below their 52-week highs.

Canopy rose 13.8% after winning a hemp license in New York; the stock has gained 62% in January this year so far.

Canadian Large-Cap: Canadian large-caps saw diverging performances last week. Canopy (CGC) rallied 13.8% after announcing its hemp license and plans to build a hemp industrial park in New York. Tilray (TLRY) lost ~20% after the IPO lock-up expired on January 15. Cronos (CRON) gained 9.0% after it mailed out the shareholder materials for the Altria investment. Aurora (ACB) had a roller-coaster week after it issued US$300 million of unsecured convertible notes. Aphria (APHA) continued to drift lower after its CEO and a Co-Founder announced plans to transition out.

Canadian Mid-Cap: The rally continued for some of the mid-cap stocks last week as HEXO (OTCPK:HYYDF) gained 9.1% and CannTrust (OTC:CNTTF) was up 2.0%. Organigram (OTCQX:OGRMF) was flat and Green Organic Dutchman (OTCQX:TGODF) lost 6.2% as Aurora continued to divest its stake in the company.

Canadian Small Cap: The small/mid-cap stocks reversed some of their earlier gains in 2019. Most stocks fell except Harvest One (OTCPK:HRVOF) which gained 7.1% without news. The biggest losers were Invictus MD (OTCQX:IVITF) after it terminated its acquisition of GTEC Holdings. Newstrike (OTCPK:NWKRF) and Indiva (otcqx:NDVAF) both lost ~10% without news. Cannabis retailers lost ground after Ontario's 25 lottery winners appeared to be all small business owners and individuals. Choom Holdings (OTCQB:CHOOF) and National Access Cannabis (OTCPK:NACNF) both dropped. 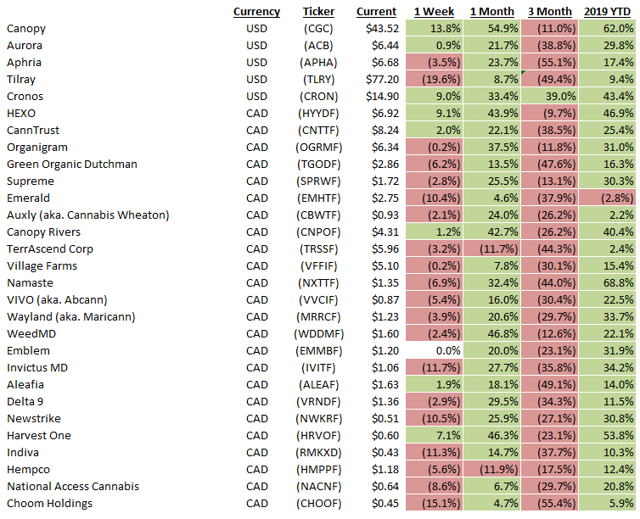 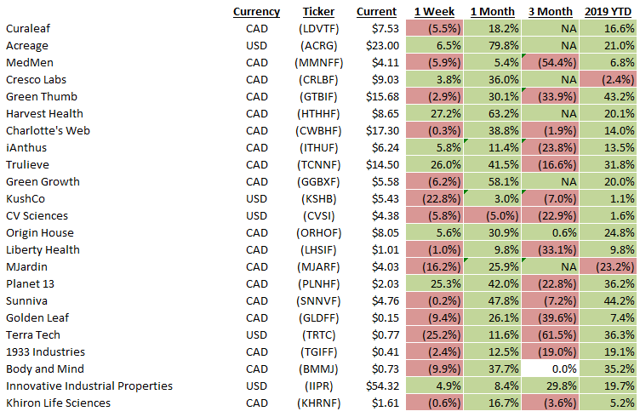 We released our Top Cannabis Picks for 2019 last week which included a summary of our best ideas heading into 2019. We will continue to review these ideas against the latest developments in the sector going forward.

After an impressive two-week run for cannabis stocks, the market finally slowed down with most stocks experiencing a slight pullback from recent highs. However, select stocks continued to rise as positive news was rewarded handsomely by investors that are returning to risky assets. The global equities market continued to recover from the December rout which helped lift risky assets, including cannabis stocks. Another positive development for the cannabis sector was New York Governor Andrew Cuomo's proposed plan to legalize recreational cannabis this year. We continue to believe that the U.S. cannabis sector will experience another transformational year in 2019 and investors should position themselves early-on in order to benefit from this secular shift towards cannabis legalization. We also continue to hold the belief that the Canadian stocks will enter a period of consolidation and the largest Canadian LPs will look to get into the U.S. market beginning with hemp. The future is bright for the cannabis industry as we see continued momentum in both U.S. and Canada.