Volatility is not a direct measure of fear or risk, but a measure of how strongly price action deviates around the mean. Low volatility indicates that the price of a security should not swing wildly around the mean and vice versa. Therefore, being long volatility is a bet on change. This can be negative change such as a recession or flash crash, or positive change such as the pre-2000s melt up. As the chart below shows, the market oscillates between regimes of high and low volatility as measured by time spent above or below the VIX average. This article examines the causes of the current regime of low volatility, why we may be transitioning into a period of higher volatility, and who stands to gain if we are indeed in the midst of a transition. 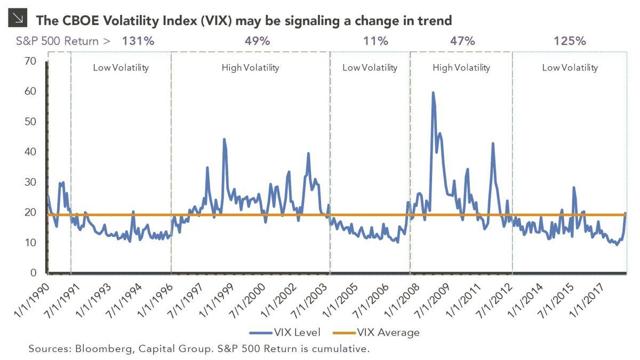 The charts below show the close correlation between S&P Volatility and credit conditions. Volatility increases with loan delinquencies and reported tightening on commercial and industrial loans. As expected, delinquency rates on loans have increased steadily with increases in the Federal Funds rate beginning in 2016. However, bank reported tightening on loan standards has not increased significantly. When companies cannot rely on cheap credit to support operations, their performance and share prices suffer, leading to sharp downturns. A record high Corporate Debt to GDP (45%) and tightening credit is a recipe for continued defaults and increased volatility in the near future. 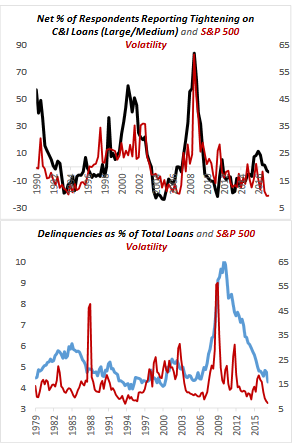 (Source: "Volatility and the Alchemy of Risk")

When market declines are met with aggressive share buybacks regardless of market valuations, volatility remains suppressed. The latest December drawdown was no exception, with S&P buybacks reaching record highs in reaction to the event. However, the market cannot indefinitely rely on the artificial stimulus of buybacks to reflate asset prices. As increased rates and record debt levels necessitate higher debt service payments, less cash will be available for buybacks. In fact, in its 2017 Global Financial Stability Report, the IMF found that 20.1% of U.S. firms are at risk of default in a sharp interest rate hike. The gravy train of artificially low interest rates that led to suppressed volatility will likely create a period of high volatility when reversed, as over-leveraged companies default or have less discretionary cash to spend on buybacks.

Lastly, active managers typically keep volatility at stable levels by selling overvalued markets and buying undervalued markets. Passive investing, a staple strategy of the current bull market, amplifies volatility because passive managers do not step in to sell overvalued and buy undervalued markets en masse. This strategy is implicitly short volatility because it only gains under the status quo of continued growth. When 50% of investing is done passively, one can assume that historically subdued volatility will be met with hyper-volatility. Now that we understand how volatility has remained so low for so long, let’s explore the evidence of why this has already changed.

Secondly, the VIX reached a seven year high of 29.06 in February, 2018. While many considered this a one-time event, it then reached 30.11 in the December crash. Two volatility spikes in the same year, both of which hitting levels not seen since 2011, gives credence to the idea that the era of ultra-low volatility is ending. Keep in mind that VIX rates in the thirties is still not extreme as the chart below demonstrates. In fact, 20+ is the norm in an eras of high volatility such as 1997-2001 or 2007-2011. 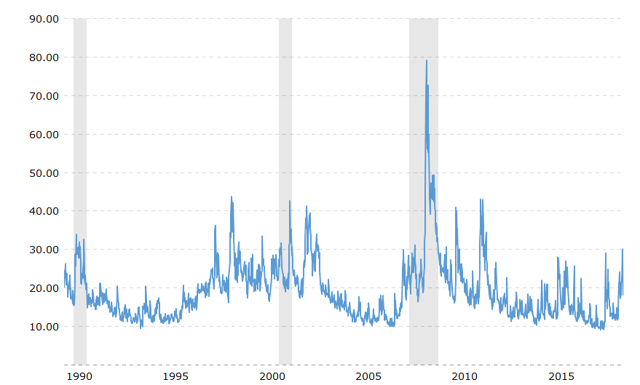 Investors should be prepared for several years of higher volatility as credit continues to contract, increasing default rates and affecting share buyback rates. As the first chart shows, markets cycle between periods of high and low volatility. With two recent volatility events, we may be in the initial phases of a multi-year volatility regime shift. If the timing is wrong, the shift will occur eventually. Historically, it always has.

With Volatility reaching all-time lows in 2017, the only direction for the VIX to go was up. In lower yielding, more volatile markets, exposure to long volatility and active strategies will likely fare better than 60/40 risk parity or indexation due to the fact that these strategies hedge themselves against left side tail risk.

Disclosure: I/we have no positions in any stocks mentioned, but may initiate a long position in VXX over the next 72 hours. I wrote this article myself, and it expresses my own opinions. I am not receiving compensation for it (other than from Seeking Alpha). I have no business relationship with any company whose stock is mentioned in this article.