Appetite growing for the precious metal, not just from investors but also central banks, which have been net buyers since 2010.

The number of ounces in major gold discoveries has been falling for years, and exploration budgets are still far below the 2012 peak. 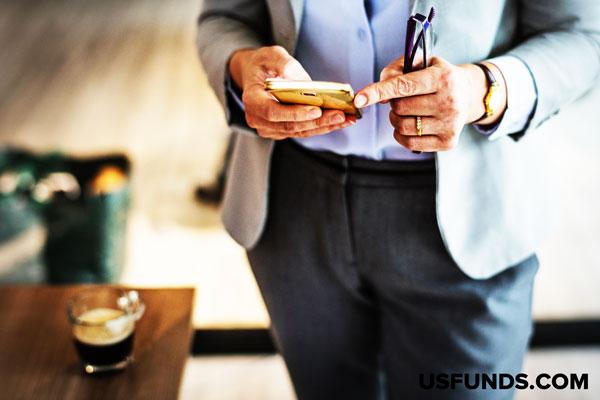 Billionaire Sam Zell just announced that he bought gold for the very first time in his life because, as he puts it, “it is a good hedge.” In a recent Bloomberg interview, the Equity International founder and creator of the real estate investment trust (REIT) admitted to seeing an opportunity in gold’s increasing supply shortage.

“For the first time in my life, I bought gold because it is a good hedge,” Zell, 77, told Bloomberg. “Supply is shrinking, and that is going to have a positive impact on the price.”

He added: “The amount of capital being put into gold mines is at most nonexistent. All of the money is being used to buy up rivals.”

I believe Zell’s reasons for investing in gold are sound, and I’ve discussed them in detail a number of times before. Supply is indeed shrinking. The “low-hanging fruit” has likely already been mined, and it’s become prohibitively expensive for many companies to look for large-scale deposits, to say nothing of developing them. As you can see below, the number of ounces in major discoveries has been falling for years, and exploration budgets are still far below the 2012 peak. 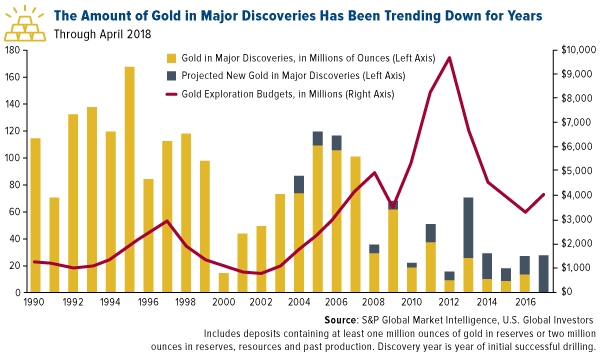 As if to confirm Zell’s reasoning, the Canadian Imperial Bank of Commerce (CIBC) forecast in a report this week that a gold deficit will emerge in 2019 “on the back of stronger demand over the next two years, primarily from bar hoarding, net central bank buying and exchange-traded products ((OTC:ETFS)).” Peak production, according to the bank, will occur in 2021 at close to 34 million ounces, but then decline to under 16 million ounces by 2030. 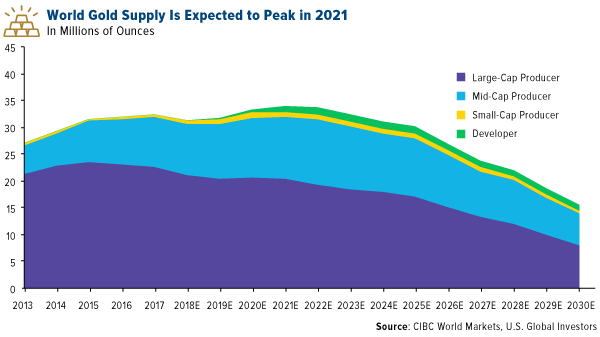 Demand isn’t abating, though. We’re seeing appetite grow for the precious metal, not just from investors but also central banks, which have been net buyers since 2010. According to CIBC, several central banks stepped back into the market last year, most notably the Reserve Bank of India ((RBI)), which until recently “has expressed negative sentiment around gold purchases.”

As attractive as I think gold bullion looks right now, there could be some incredible opportunities in gold equities, which are extremely discounted compared to the S&P 500 Index.

And in an article dated January 22, Bloomberg analysts David Stringer, Ranjeetha Pakiam and Danielle Bochove point out that a good place to look for gold equities could be mid-sized producers, which have outperformed both bullion and the entire global mining industry. For the 12-month period as of January 18, four miners in particular—Kirkland Lake Gold, Northern Star, Evolution and OceanaGold—all posted double-digit performance. By contrast, the Bloomberg World Mining Index was down more than 20 percent. 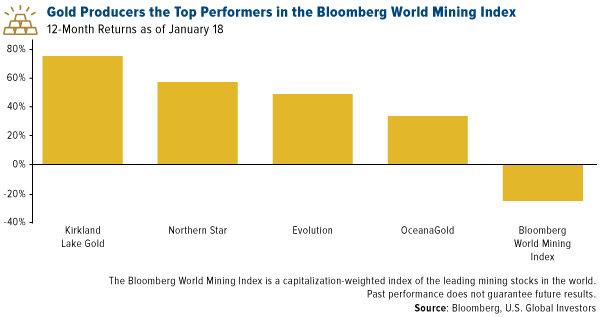 Northern Star was up 54 percent for the 12-month period. The Australian producer had a phenomenal fiscal year 2018, with net profit up a respectable 3 percent even as the price of gold was in decline. Dividend payouts were raised 6 percent. And the company continues to carry no debt.

Consolidation in the Goldfields

Sam Zell’s other point—about miners allocating their capital not to projects right now but to acquisitions—is also well-made. Indeed, industry consolidation is beginning to happen, which could possibly signal that the industry has found a bottom. Back in September, mining giants Barrick Gold and Randgold Resources announced a deal worth $6.5 billion, making the world’s largest gold producer by annual output. That record will stand for only four months, as Newmont Mining just made public its own plan to buy rival Goldcorp for $10 billion.

The next deal to surface could be nearly as large. It’s now rumored that South African producers Gold Fields and AngloGold Ashanti are interested in merging. Although the rumor has not yet been confirmed, Gold Fields CEO Nick Holland said in an interview this month that “if you are going to survive in the long term, you are going to have to look at consolidation.”

A real estate investment trust is a company that owns, and in most cases operates, income-producing real estate. REITs own many types of commercial real estate, ranging from office and apartment buildings to warehouses, hospitals, shopping centers, hotels and timberlands.

The S&P 500 Index (Standard & Poor's 500 Index) is a market-capitalization-weighted index of the 500 largest U.S. publicly traded companies by market value, The index is widely regarded as the best single gauge of large-cap U.S. equities.

There is no guarantee that the issuers of any securities will declare dividends in the future or that, if declared, will remain at current levels or increase over time.

U.S. Global Investors, Inc. is an investment adviser registered with the Securities and Exchange Commission ("SEC"). This does not mean that we are sponsored, recommended, or approved by the SEC, or that our abilities or qualifications in any respect have been passed upon by the SEC or any officer of the SEC.This commentary should not be considered a solicitation or offering of any investment product.Certain materials in this commentary may contain dated information. The information provided was current at the time of publication.

Disclosure: I am/we are long AEM, WPM, BTG, SSRM, KL, NESRF, CAHPF, OCANF, GOLD, NEM, GFI. I wrote this article myself, and it expresses my own opinions. I am not receiving compensation for it. I have no business relationship with any company whose stock is mentioned in this article.

Follow Frank Holmes and get email alerts
+
Add a comment
Disagree with this article? Submit your own.
To report a factual error in this article, click here.
Your feedback matters to us!