The shutdown is over, but perhaps that’s not such a good thing. The S&P 500 (SPY) rose more than 10% during the 35-day partial government shutdown, the longest shutdown in US history. Amid the volatile backdrop of political and trade uncertainty, US markets have seemingly calmed down following a month full of wild swings last December. Friday’s rally was not quite enough to push the benchmark to its fifth straight weekly gain, as the S&P 500 finished down 0.2% on the week. The Nasdaq (QQQ) and Russell 2000 (IWM) finished the week essentially flat as the 10-year yield, at 2.75%, remains roughly a half-percentage-point below its recent high last November.

Following their worst year since the financial crisis, real estate and housing-related equities continue to lead the rally in 2019. REIT earnings season got off to a solid start this week as more than 100 REITs will report results over the next five weeks. Industrial REIT Prologis (PLD) hasn’t seen “any softness” in demand for their distribution centers. REITs (VNQ and IYR) rallied for the third straight week, pushing their gains this year to roughly 8%. Cell towers and student housing REITs were the strongest performers while data centers lagged the index following weak commentary on data center demand from Intel (INTC). 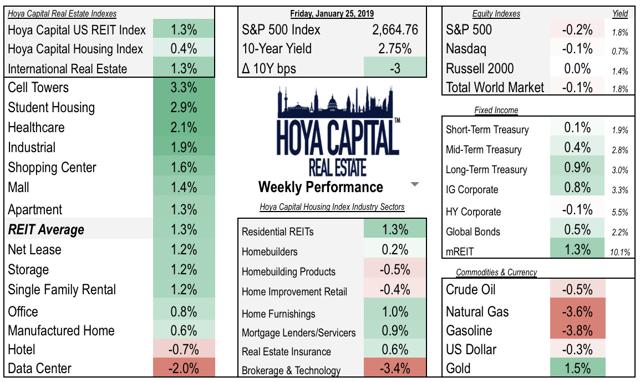 The Hoya Capital Housing Index, an index that tracks the performance of the US housing industry, finished the week modestly higher on solid performance from residential REITs (REZ) and the home furnishings sector. The second and third largest homebuilders in the nation, D.R. Horton (DHI) and NVR (NVR), both reported results that were roughly in line with expectations. Order growth slowed considerably in late 2018 for both firms, but commentary was generally seen as constructive and mildly positive. The retreat in mortgage rates has lifted optimism across the Homebuilding (XHB and ITB) sector, which has managed to climb 8% this year. 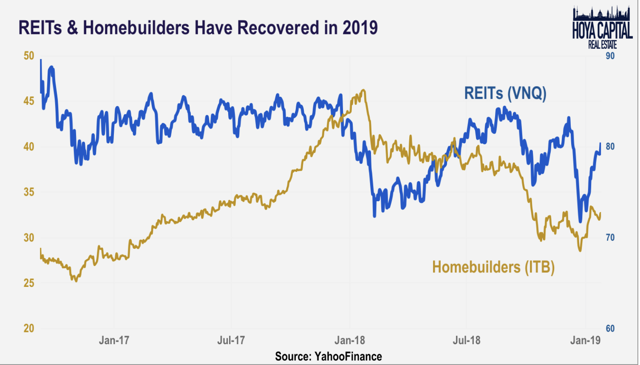 The brokerage and technology sector struggled following the release of weaker than expected existing home sales data in December. Redfin (RDFN), Realogy (RLGY), and Zillow (Z) were among the weakest performers in the Housing index, each dipping 4% or more on the week. Home furnishings retailers Overstock (OSTK) and At Home (HOME) were the two best-performing components in the Housing Index this week. This week, we compared two homebuilding ETFs in our report: XHB Vs. ITB: The Homebuilder ETF Open House. 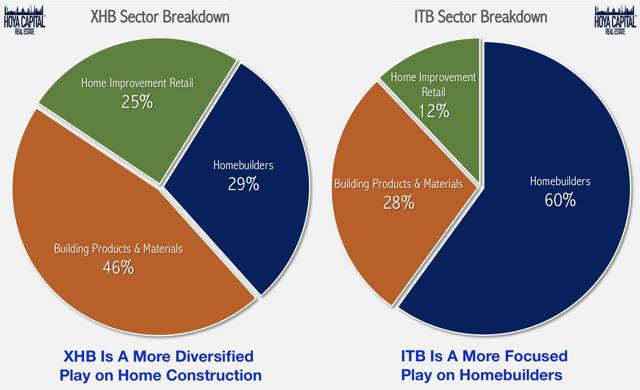 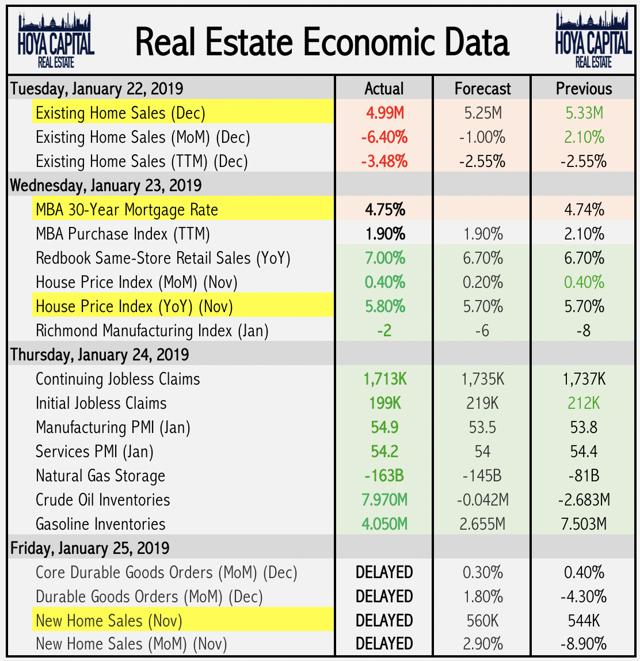 December existing home sales, which reflects buying activity in October and November of last year when mortgage rates climbed to a five-year high, was weaker than expected as the slowdown across single-family markets in the second half of 2018 was even more significant than anticipated. According to data from the NAR, the seasonally adjusted annualized rate of existing home sales dipped below the 5.0 million level for the first time since January 2015. 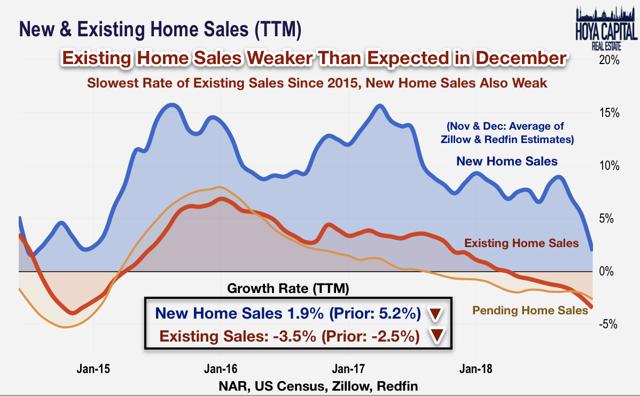 New Home Sales data continues to be delayed by the government shutdown, but Redfin provided their own estimates of sales in November and December, following Zillow’s lead. Using an average of the two firm’s estimates, new home sales appears to have finished 2018 higher by less than 2%, the weakest rate of annual growth since 2014. Existing sales finished in negative territory by more than 3%, also the weakest since 2014. Redfin chief economist Daryl Fairweather noted the challenges facing the housing markets, particularly the relatively higher-priced new homes.

"All around the country homebuyers were backing off at the end of last year due to high prices and high mortgage interest rates, and 2018 tax reform made it even more expensive to buy high-priced homes in high-tax states like Massachusetts, Connecticut and New York. New homes tend to be pricier than existing homes, which is one reason sales of new homes dropped off so much in the Northeast," said Redfin chief economist Daryl Fairweather.

Both new and existing home sales remain far below the levels seen in the early to mid-2000s. New home sales peaked in 2005 at nearly 1.3 million units and bottomed in 2011 at below 300k. The grinding recovery has brought these levels barely above those of the real estate recession of the early 1990s. The growth in existing home sales have slowed since 2015, but this rate remains fairly healthy by historical standards. Too many existing home sales (as we saw from 2003-2006) indicate that either mortgage standards have gotten overly loose or short-term housing flipping activity has increased. At around 7% per year, the turnover rate of existing homes is roughly in line with pre-2000 levels. 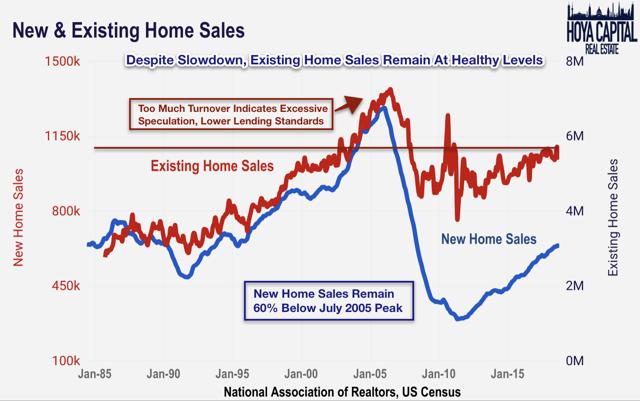 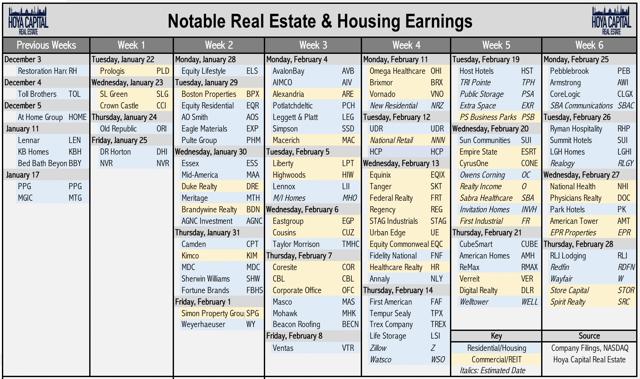 After the dismal end to 2018 for single-family housing data, homebuilders earnings will be a key focus of not just real estate investors but of all global market participants. Given the sensitivity of single family ownership demand to mortgage rates, and the wide range of expectations on rates, earnings commentary and guidance will likely be all across the board. Homebuilders PulteGroup (PHM), Meritage (MTH), and M.D.C. (MDC) report results next week. 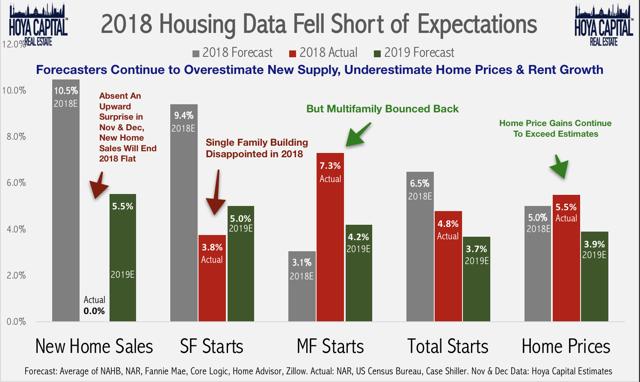 Real estate equities have led the broader equity over the last quarter amid the retreat in interest rates and inflation expectations. The “Rates Down, REITs Up” mantra continued throughout 2018. For REITs, investors will be hoping that the positive momentum of 2018 continued in 4Q18. A trend of the past two years, 2019 guidance is likely to be very conservative. 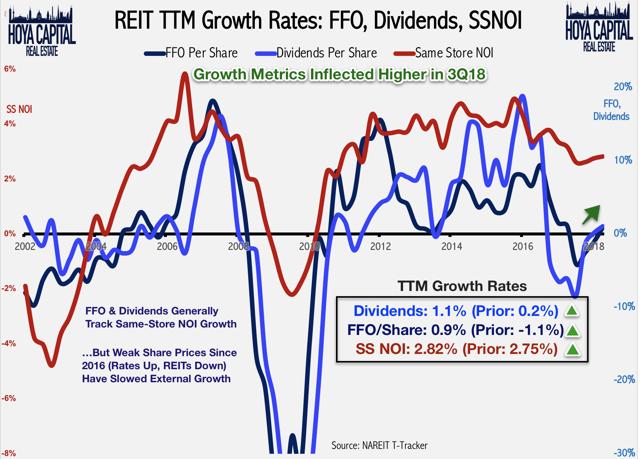 So far in 2019, REITs and Homebuilders have each climbed roughly 8%. The S&P 500, meanwhile, has climbed 6% on the year while the small-cap Russell 2000 has jumped 10%. At 2.75%, the 10-year yield has risen by a relatively modest 7 basis points since the start of the year, nearly 50 basis points lower than the peak levels of last November. Energy prices, including crude oil and gasoline, have recovered this year after a sharp decline in late 2018. 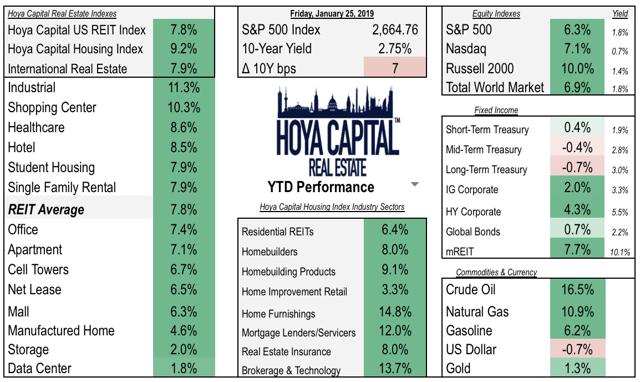 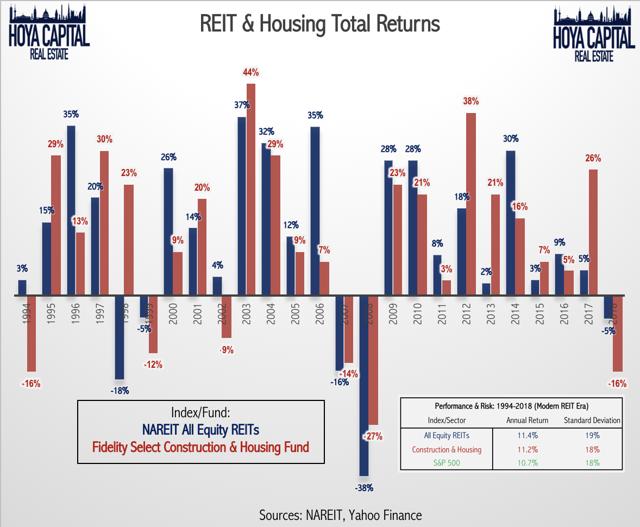 Amid a volatile backdrop of political and trade uncertainty, US markets have seemingly calmed down over the last several weeks. The S&P 500 barely missed notching a fifth consecutive positive week. The longest US government shutdown in history came to a temporary halt on Friday as the negotiations continue. The S&P 500 rose more than 10% during the 35-day shutdown.

REIT earnings season got off to a solid start this week. Industrial REIT Prologis hasn’t seen “any softness” in demand for their distribution centers. REITs rallied for the third week. The second and third largest homebuilders, D.R. Horton and NVR, both reported in line results. Order growth slowed considerably in late 2018, but homebuilders have managed to climb 8% this year. Existing home sales data was below expectations this week as sales slowed in December to the weakest rate since 2015. Single-family markets are increasingly sensitive to mortgage rates.

Disclaimer: All of our published commentary is for informational purposes only, always provided free of charge. Commentary is purely theoretical and not intended as investment advice. Information presented is believed to be factual and up-to-date, but we do not guarantee its accuracy and it should not be regarded as a complete analysis of the subjects discussed. An investor cannot invest directly in an index and index performance does not reflect the deduction of any fees, expenses or taxes. Data quoted represents past performance, which is no guarantee of future results. The information presented does not reflect the performance of any fund or other account managed or serviced by Hoya Capital Real Estate. Please consult with your investment, tax or legal adviser regarding your individual circumstances before investing. For complete disclosure, view our profile via the link above.

Disclosure: I am/we are long VNQ, XHB, INTC, SPG, SPY. I wrote this article myself, and it expresses my own opinions. I am not receiving compensation for it (other than from Seeking Alpha). I have no business relationship with any company whose stock is mentioned in this article.