Communication is key to progress. As our species evolved we learned more efficient ways to share information. A signal can be shorthand for what happens next. The Greeks, Chinese, and Native Americans used smoke signals to share news, signal danger, or gather people together. Today, we trust signals will help us prepare and coordinate for what’s next (safe to cross; stay on the sidewalk; your burger is ready). Other signals are not man-made, and more ominous — water massively receding from the coast signals a tsunami. 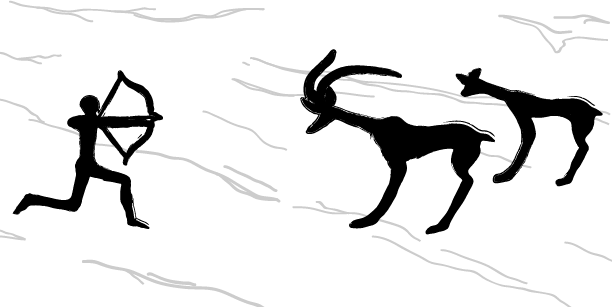 I’m back from a two-week tour in Europe including a stop at DLD, which serves as a three-day preseason game for Davos. Being at DLD, and outside the country, has given me some perspective on what’s coming. Or maybe it’s jetlag. Regardless, it feels as if there have been a number of signals already in 2019 that make the rest of the year less opaque.

Media globally is a zero-growth business. This, coupled with the 2019 projected $245B of advertising revenue by the top three media companies (Google (NASDAQ:GOOG) (NASDAQ:GOOGL), Facebook (NASDAQ:FB), and Amazon Media Group (NASDAQ:AMZN)) creates a sonic-level sucking sound of oxygen leaving the room. The chaser effect, kicking the media horse while it’s down, is younger consumers are increasingly opting for user-funded media (Netflix (NASDAQ:NFLX), Spotify (NYSE:SPOT), [[NYT]], WaPo) and intolerant of programming funded by ads telling them they need to clean their catheter or that they may be entitled to compensation after a slip and fall. What’s the difference between media that’s dying and thriving (sans the triopoly)? Simple: Interruptive ads. 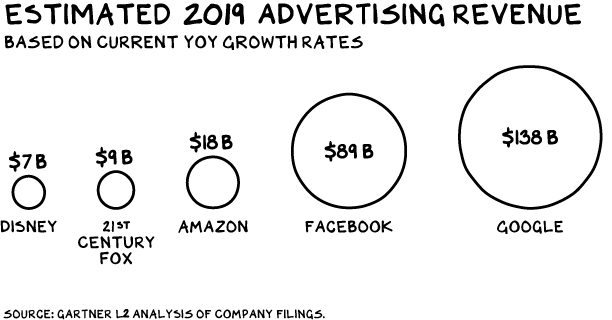 Three players have oxygen masks, and the rest of media are slowly asphyxiating. This year we’ll begin to hear disturbing thuds of young and old media firms collapsing to the floor. Ad-supported media will incur more pain and be thrust into someone else’s arms for a fraction of their halcyon-day valuations. VC-backed cool-kid media firms hitting the skids isn’t a tragedy. In 1998 bankers told me, as the founder and largest shareholder in Red Envelope, that I’d likely be a billionaire on the IPO. It didn’t happen, and I survived. People find me substantially less interesting than when I was pre-billionaire. But I digress.

A real danger is media no longer has the resources to continue standing watch over the private and public sectors. The erosion in funds for investigative journalism, coupled with the noise and obfuscation of social media and attacks from the president, have emasculated the most effective police force not to carry a gun or a badge. The bright spots are billionaires stepping in to fund great institutions ranging from Time and The Atlantic to WaPo and Businessweek. However, as corporate Americans and America (the government) increasingly become one and the same, to believe tech billionaires will police themselves is naive.

Technology (cameras, analytics, forensics) has led to a massive reduction in violent crime. However, big tech will result in a massive increase in white-collar crime and risks the collapse of constructive capitalism. The wealthiest man in the world (Bezos), and the most valuable firm in the world (Amazon) have likely, on a net basis, never paid taxes. So just as the triopoly grows their revenues to $245B this year, as thousands of media firms lose millions, the world’s 2,200 billionaires (of which 585 are in the US) grew 12% wealthier in 2018.

I would be curious to know the effective tax rate of these individuals. I posit it’s negative (they are subsidized by the government). Their tax lawyers, lobbyists, trusts, and offshore vehicles, accessorized with civic concern, result in the owner of the Phoenix Suns getting a $150M subsidy from Arizona taxpayers after threatening to take his ball (players) and leave (go to another city). Jeff Bezos is getting $480M (his 16% ownership x $3B in NY subsidies) for making the commute from his Manhattan residence less difficult.

“Corporations need to be more transparent; consumers expect them to play a more positive role in society”

The above is a decent summary of every talk at Davos, where yet again I wasn’t invited. In the words of Anand Giridharadas, Davos is a fire safety convention that invites arsonists. Yes, in pursuit of “improving the state of the world,” the World Economic Forum invites people who have made the most money while doing the most damage (Sheryl Sandberg’s talk was titled “What Kind of Internet Do We Want?”). I don’t know, Sheryl, maybe one that doesn’t inspire genocide, polarization, or teen depression?

A gathering replete with 25 people worth more than the Southern Hemisphere to discuss income inequality feels a bit obtuse. The ointment of the hypocrisy is also hosting primatologist Jane Goodall and a Brazilian artist who paints seascapes with his feet. If I sound like a bereft jerk who has been to Davos (see above: pre-billionaire), but hasn’t been invited back in a decade... trust your instincts.

Yes, consumers hope firms will be better citizens, and some are, but it’s a flawed strategy destined to fail. What moment in history can we point to a corporation saving the day? It’s been FDR, Mother Teresa, and Schindler who’ve saved humanity, not Monsanto, ITT, or Chick-fil-A. When a corporate executive begins blathering on about the increasingly important role of corporations solving the world’s problems, it’s the preamble to a park in the inner city made of recycled tires as they pour plastic into the ocean. Last week, Facebook committed $300M to journalism projects, as they suck $8B/year from the ecosystem that funds journalism, media.

The Best P&G Can Get?

Woke as a business strategy makes sense. But it has little to do with doing the right thing. Marc Pritchard, CMO of Procter & Gamble (NYSE:PG) and an effective spokesperson for the industry, said in Davos that people have come to expect more from corporations. Maybe. People do expect more from tech, as science has played a seminal role in fighting tyranny and curing disease. But tech’s shift from putting men on the moon to suppressing the vote has busted the myth.

Seeing the opportunity to appeal to progressives — who have more money but less representation — Nike (NYSE:NKE), Dick’s (NYSE:DKS), Pepsi (NASDAQ:PEP), Coke (NYSE:KO), Starbucks (NASDAQ:SBUX), and P&G’s Gillette have gotten in touch with their inner woke. Gillette catalyzed an interesting conversation with an ad that attempted to address the issue of toxic masculinity. It’s the right strategy (women buy men’s razors) and demonstrates the firm’s willingness to take a risk. However, their agency threw up on themselves with a poorly produced ad that ensured Nike and Wieden will win everything at Cannes.

Corporate executives going woke at conferences is good marketing and a chance for them to pretend they are a senator without having to subject themselves to the scrutiny and sh***y pay of public office. We, the public, also fall for it, hoping these increasingly powerful entities (corporations) will suddenly become concerned with the condition of our souls and take care of us when we’re older. No, they won’t. They play a key role, providing economic security for their employees and shareholders and (hopefully) paying their taxes. And they can change the world, but it will always be in the pursuit of shareholder value. They also need guardrails. Tom Brady is a good person (I think), but without referees on the field the incentives to win are so dramatic that it would be near-impossible for him not to rationalize whatever behavior gets his team the win. In tech, the teams have adroitly removed the refs, and it’s the same four teams, every day, in the playoffs.

“We need to question the fundamental incentives that are in our product today.”
— Jack Dorsey, Twitter CEO

The stock dove 6% on the notion that Dorsey was serious about rethinking the incentives nudging people toward rage-filled engagement and clicks. Not to worry, it was a lie, and the stock has recovered. The Covington fiasco last weekend confirmed Twitter (NYSE:TWTR) has not put in place any real safeguards to prevent bad actors from weaponizing the platform to sow havoc in our country.

The same guy who boasted of his vacation in Myanmar hasn’t put in place basic safeguards to prevent weaponization of the platform (shocker). Presented with the well-being of the commonwealth or shareholder value, Jack Dorsey picks door two. Ms. Sandberg’s cocktail of lies and likability have been the heat shield for Zuck — Facebook’s repeated crises have distracted scrutiny from Google. Just as Facebook’s lies, denials, and obfuscation come from one of the most admired women in the world, Mr. Dorsey’s beard and $25B valuation make the micro-blogging platform appear youthful and innocent. It doesn’t help that the political party controlling two houses of government no longer views Russians as commie bastards, but comrades. But that’s another post.

At the DLD conference in Munich, the crowd was subjected to the Groundhog Day speech of Sheryl Sandberg. Guess what, they “need to do better.” The more important talk was from German Federal Minister of Economics and Energy Peter Altmaier, who highlighted the need to provide greater oversight of tech firms. He then went on to talk about funding for German startups, since their government, similar to all of us, fetishizes innovators.

The solution? The same as it’s ever been.

When faced with making the world a better place or growing earnings, for-profit organizations will opt for earnings, as this is their job. Lately, the corporate world has been doing its job in spades, and corporate profits have touched all-time highs. The immunities to the externalities of capitalism are regulation and antitrust. However, big tech is a supervirus that rolls over immunities deploying idolatry and lobbyists (2018 set a new record for lobbying spending from Amazon, Facebook, and Google). 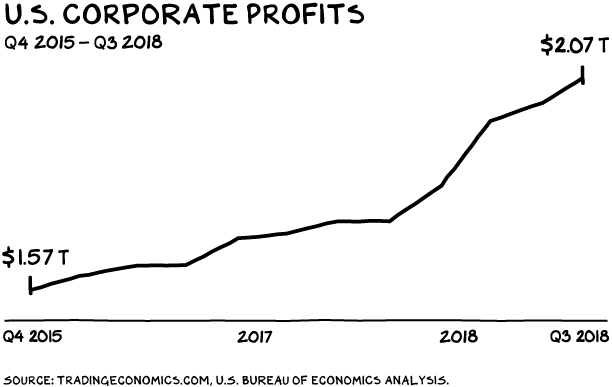 There is an answer, an antidote, a solution. It’s up to the same people who put a man on the moon, invented the internet (DARPA), and liberated Auschwitz. The US government needs to break up big tech before we hit the tipping point and our immunities are overrun.

Follow Scott Galloway and get email alerts
+
Add a comment
Disagree with this article? Submit your own.
To report a factual error in this article, click here.
Your feedback matters to us!