On Friday, WSJ's article about the Fed might end balance sheet reduction soon is the market mover.

However, the article is merely restatements of what the Fed has published publicly in the last couple of weeks.

The market movement clearly reflects investors are eager to see the Fed pause the normalization policy.

Question is, what how should Powell react to this request?

In the article, Timiraos suggests that the Fed will consider ending the Balance Sheet normalization early. This article was a market-mover, lifting US equities with its dovish sentiment.

While Timiraos's article is a very good preview for the Fed's meeting next week, a careful reader would know that there is not much new information presented in the article that is not already known since the last Fed minutes' publication.

The fact that these widely-available information can move the market might suggest that investors are hungry for stimulus from the monetary policy front.

If you read the article, you will see that there are three main points in it:

Those are widely available, if not widely discussed, information. Especially, I would love to point readers to my previous article discussing point no. 2, the technical difficulties facing the Fed in maintaining the effectiveness of the current interest rate framework.

[R]educing reserves to a point very close to the level at which the reserve demand curve begins to slope upward could lead to a significant increase in the volatility in short-term interest rates and require frequent sizable open market operations or new ceiling facilities to maintain effective interest rate control. These considerations suggested that it might be appropriate to instead provide a buffer of reserves sufficient to ensure that the Federal Reserve operates consistently on the flat portion of the reserve demand curve so as to promote the efficient and effective implementation of monetary policy. (Emphasis mine)

Here we can clearly see that for the Fed officials, there is a pressing problem in figuring out where is the so-called Saturated Level of Reserves. 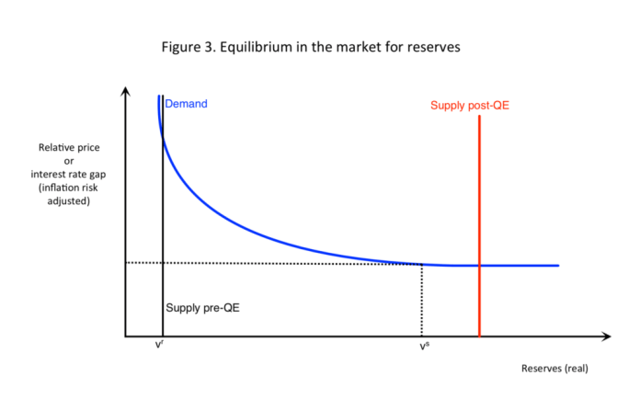 The saturated level of reserve is the point which the opportunity cost for banks to hold reserves disappears, and became indifferent towards holding more reserves. The reserve demand curve beyond this point becomes close to horizontal. (See figure above)

After the Fed's decision to implement positive Interest on Excess Reserves (IOER) in 2008 and several rounds of QE, the Fed has been operating its interest rate policy at a saturated reserves market. The banks face near zero opportunity cost when holding reserves. This is the so-called Floor system that the Fed is using.

What keeps the Fed's officials up at night is the fact that the effective Fed Fund rate (EFFR) is the last half year is edging toward the level of IOER.

As EFFR rise clear above IOER was regarded as a flashing signal that the reserves market will soon back to the level below the saturated point, the closing spread between IOER and EFFR, which is zero now (as shown on the graph above), makes the Fed wonders if the saturated level of reserve is much higher than they previously assumed.

That is, the Fed suddenly have an urgent need to re-examine their normalization plan and make sure they can maintain the Floor system. This is the true reason that the Fed needs to consider ending the balance sheet reduction sooner.

As we can see from the last Fed minutes, they have explicitly discussed this option:

Some participants commented on the possibility of slowing the pace of the decline in reserves in approaching the longer-run level of reserves. Standard temporary open market operations could be used for this purpose. In addition, participants discussed options such as ending portfolio redemptions with a relatively high level of reserves still in the system and then either maintaining that level of reserves or allowing growth in nonreserve liabilities to very gradually reduce reserves further.

This is hardly new news!!

Also, on point no. 3 in the WSJ article, as Timiraos again clearly pointed out in his article, it is explicitly stated in the Fed minutes:

It is very surprising, in my humble opinion, to see that a series of restatements of what had been published to the public for almost half a month can move the market.

My opinion is that the positive market sentiment after this WSJ article published is merely the projections of investors eagerness to nudge the Fed to pause the balance sheet reduction policy soon.

Now, we have a very interesting situation which the Fed clearly can feel this sentiment after Friday's trade, and it will be a central discussion in the coming Fed meeting.

Remember, Chairman Powell have to attend a press conference after the meeting, he will definitely have to answer the question about the end game of balance sheet normalization.

What will he answer? I think the preferred way to tackle this question is for him to be as nerdy as possible, focus on the technical aspect of the discussion. Tell the public that they are observing the saturated level of reserves, and remind the market that they will make sure the interest rate framework will stay at the floor system, if that is their preferred system, and will do whatever it takes.

The market obviously doesn't have a good understanding of the technical problem facing the Fed, and a sudden realization of it will definitely shake the market. Powell has a responsibility to calm the market preemptively.

Follow EconReporter and get email alerts
+
Add a comment
Disagree with this article? Submit your own.
To report a factual error in this article, click here.
Your feedback matters to us!