As readers know, AMD (NASDAQ:AMD) will release its Q4 2018 results today AH. Since at least May 2018, I have been arguing both through articles and in the comments sections, that if AMD did not reach $9 per share by Q1 2019, I would stop writing about AMD on SA altogether. We are now 90 days away.

Background To Investing - Does Scuttlebutt Give You An Edge?

It has been my strong contention that AMD has been overvalued and overdue a correction for a long time now. And in spite of evidence that AMD's top line is not commensurate with that of a high growth company, AMD's share price continues to be overinflated.

AMD has a very strong fan base, made up predominantly of gamers, who use its products and mistakenly believe that since they use AMD's products, that this automatically means AMD makes for an outstanding investment. Right away, once we have seen this written, we can understand this makes for a nonsensical investment thesis, in most cases.

Having said that, we know of numerous cases from particular investors who have over time succeeded terrifically well through this type of scuttlebutt analysis. For example, Jesse Livermore, Philip Fisher and obviously Peter Lynch. However, while this type of analysis gives investors an edge in the start thesis, at some point in time, the evidence needs to be backed by hard numbers.

On Monday, Nvidia (NVDA) updated shareholders of the challenging quarter Nvidia has had with its GPUs, as crypto hangover continues to play a role in the pricing power of GPUs. However, so far, this information has hardly been reflected in AMD's share price. Granted, AMD did fall by 6%-7% on Monday, but this was during a down day for the overall market, anyway.

Next, I suspect that most shareholders will have been highly dismissive of this information, given that AMD makes a large portion of its revenue from CPUs rather than GPUs. Having said that, when we look back to AMD's Q3 2018 results, we can derive that while AMD's Computing and Graphics segment accounts for roughly 55% of total revenue, that GPUs only make up a portion of this revenue.

In more detail, while AMD's Computing and Graphics segment was up 12% YoY, AMD's Radeon graphics was already dragging down this segment's performance back in Q3 2018, in part due to the decline in blockchain-related demand.

In other words, AMD was able to post strong growth in Q4 2017 (last year) on the back of crypto tailwinds. However, tonight, when AMD releases its Q4 2018 results, AMD will be forced to come clean and demonstrate just how much crypto demand had been benefiting AMD. Was it indeed in the low double-digit percent of AMD's overall revenue? Or was it considerably more?

Zealous (and objective) AMD shareholders will hopefully remember how CEO Dr. Lisa Su had been playing down AMD's benefit from crypto-demand earlier in the year, and as the quarter progressed, this benefit was continuously acknowledged to have played a larger role. Consequently, given Nvidia's recent update demonstrably proves that Nvidia has struggled with pricing its GPUs, I assert that AMD's revenue is likely to disappoint.

Long-Term Target - Does It Have Any Substance?

During the Q3 2018 earnings call, CEO Su had continued to hold on to the fact that AMD could deliver on its $0.75 per share target for FY 2020. Given my assumption that AMD was operating in a very favorable pricing environment during 2018, at least when it came down to its Radeon products, I suspect that AMD will struggle to deliver upon this target.

This would mean that AMD is being priced at roughly 43X earnings. And while many AMD shareholders claim that one should not use value metrics when it comes to pricing a high-growth company, the issue I have is that AMD is not growing anywhere near fast enough to qualify as a growth company. 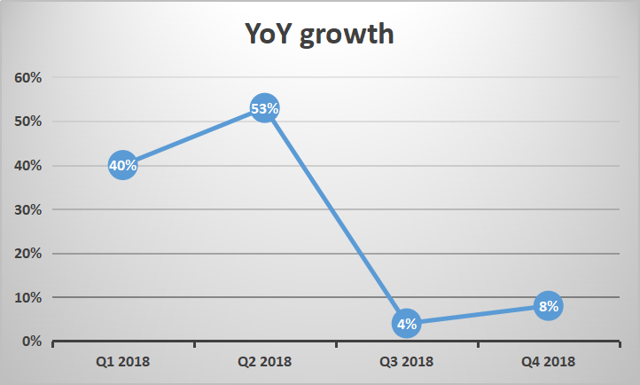 Finally, as we have already discussed throughout the article, AMD operated in an abnormally positive environment during 2018. What will happen on the Q1 2019 guidance when AMD struggles to beat its mightily strong Q1 2018 results? I suspect that AMD's share could sell-off meaningfully and start to trade closer to my $9 target for Q1 2019.

Short Sellers Are Calling It A Day

According to the latest figures, AMD's shorts have largely been covering their positions. Presently, only 13.5% of the float is now sold short. Meaning that many short sellers have given up on AMD's short thesis. This will have undoubtedly offered AMD's share price a boost of late. However, I contend that if AMD's Q1 2019 guidance disappoints, that short sellers will return in force.

As fellow SA contributor Kwan-Chen Ma titled his article, It's All About Q1 Revenue Guidance. Readers can certainly expect an update from me post-earnings.

Disclaimer: Please do your own due diligence to reach your own conclusions.

At Deep Value Returns, I'm laser-focused on two things: free cash flow and unloved businesses. Companies going through troubled times, but that are otherwise stable and cash flow generative when bought cheaply, provide investors with an opportunity for exceptional returns once those names come back in favor. If you're looking for a deep value investing approach inspired by Buffett, Icahn, and Greenblatt that can help you generate between 50% and 200% potential upside in just a few years, then sign up for your two-week free trial with Deep Value Returns today!

Michael Wiggins De Oliveira
40.01K Followers
Author of Deep Value Returns
Offering high potential upside versus the broad market
THANK YOU for all the help that everyone has so kindly offered me, in how to think about businesses from different perspectives.

DEEP VALUE RETURNS: The only Marketplace with real performance. No gimmicks. I provide a hand-holding service. Plus regular stock updates.

We are all working together to compound returns.

WARNING: Any stocks that you feel like buying after discussions with me are your responsibility.