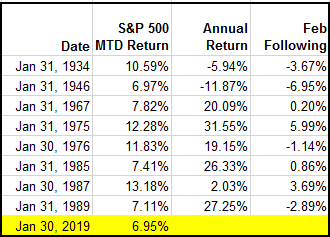 The S&P 500 had a notable turnaround in January after posting its second-worst December on record. While there were, and still are, some major global uncertainties - both domestically and internationally - it seems like the market was being mainly driven by the Fed. It wasn't just the S&P 500 but was the entire U.S. equity stock market that was impacted. All 42 segments of size, style and sector were positive, which has happened in just 11 prior months, last in March 2016.

Half of the 42 segments of the U.S. equity market are on pace to post their best January on record, using data starting Sep. 1989, the earliest available sector data. Also, some sectors are on pace to post relatively strong record months, for example, the S&P 600 Real Estate and the S&P MidCap 400 Value are each targeting their 4th best month ever, with respective gains of 12.88% and 11.30%. The S&P MidCap 400 gained 9.87% and S&P SmallCap 600 9.63%, both posting their best Januaries and beating the S&P 500, as they historically have in rebounds. Energy was the best performing sector, and unsurprisingly (due to hedging,) large caps (+10.24%) lagged the smaller company performance (+18.67%) as oil rose from sanctions on Venezuela and supply cuts from Saudi Arabia.

S&P Dow Jones Indices
2.05K Followers
At S&P Dow Jones Indices, our role can be described in one word: essential. We’re the largest global resource for index-based concepts, data and research, and home to iconic financial market indicators, such as the S&P 500® and the Dow Jones Industrial Average®. More assets are invested in products based upon our indices than any other index provider in the world; with over 1,000,000 indices, S&P Dow Jones Indices defines the way people measure and trade the markets. We provide essential intelligence that helps investors identify and capitalize on global opportunities. S&P Dow Jones Indices is a division of S&P Global, which provides essential intelligence for individuals, companies and governments to make decisions with confidence. For more information, visit www.spdji.com.Copyright © 2016 S&P Dow Jones Indices LLC, a division of S&P Global. All rights reserved. This material is reproduced with the prior written consent of S&P DJI. For more information on S&P DJI please visitwww.spdji.com. For full terms of use and disclosures please visit www.spdji.com/terms-of-use.
Follow
To ensure this doesn’t happen in the future, please enable Javascript and cookies in your browser.
Is this happening to you frequently? Please report it on our feedback forum.
If you have an ad-blocker enabled you may be blocked from proceeding. Please disable your ad-blocker and refresh.