A new report has found that the UK continues to be the most represented country in Europe with 32% of total public M&A deal activity, according to the FY18 Global RiskArb report. Its share shrunk from the 37% recorded in 2017, but remains roughly in line with previous years.

The study, carried out by Dealreporter, a provider of intelligence on M&A, event-driven special situations, convertible arbitrage as well as equity capital market and debt capital market transactions, is a review of public M&A transactions covered worldwide, and has revealed that the UK deal value decreased dramatically, from EUR 191bn to EUR 99bn in 2018. However, 2017's value figure included the lapsed Unilever (UL) (UN)/Kraft (KHC) deal, which accounted for 73% of the total value of that year. Excluding it from the count, the UK deal value would have grown by more than 90% year-on-year in 2018.

Europe experienced a remarkable drop in value to 23%, one third of its past value, although its deal volume remained stable at 22%. Western Europe saw a steep decline in number of deals, accounting for only 25% of deal activity compared to 42% in 2017 and an average 40% in the past three years.

North America made up the bulk of activity, representing 43% of volume and 60% of value globally. Asia-Pacific was last in terms of deal value (16%), although this represents its peak over the last five years. However, the region was second after North America in terms of volume, with 32% of total deals announced in 2018.

"The increased macro-economic and geopolitical uncertainties, such as US President Donald Trump's trade war with China and Brexit looming in Europe, impacted the second half of the year but were not enough to overturn the record first six months, leaving 2018 the busiest year of the last five in terms of volume of deals." 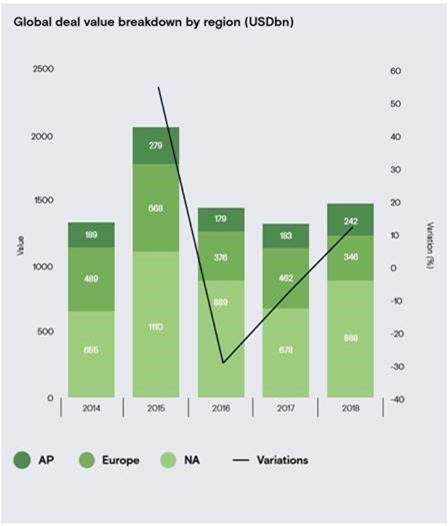 In 2018, the global lapse ratio - the number of deals that failed to complete out of those announced - dropped slightly to 17% from 17.8%. Europe represented 28% of lapsed deals globally with a lapsed ratio of about 21%, steady compared to 2017, but still the highest lapse ratio globally. Most of the deals that lapsed were at an expected stage, suggesting failure to reach an agreement at board level as being instrumental in bidder withdrawal. Agreement on price might have been the key deal breaker in this year's turbulent market. North America recorded the lowest lapse ratio of the three regions at 13.3%, down from the 15.2% recorded in 2017. The largest was the proposed USD 71.6bn take-private of Tesla (TSLA). Asia-Pacific's lapse ratio of 17.2% in 2018 compares to an average of 19.6% between 2014 and 2017.

Cross-border remains a prevalent feature of the European M&A market with 71% of bidders coming from a different country than that of the target's headquarters - from 58% in 2017. In Europe, European bidders still made up more than 50% of the total cross-border deals, a decline from the 64% recorded a year before. Among non-European bidders, six were Chinese (2 in 2017) while 23 were North American (15 in 2017).

In North America and Asia, cross-border deals historically represent almost a third of M&A activity. The trend in North America is that of a decline, with the incidence of cross-border deals gradually shrinking from 33% in 2014 to 21% in 2018, and non-US bidders coming from Europe (16) more numerous than Asian counterparts (3). This is likely due to risk from the Committee on Foreign Investment in the United States (CFIUS) and to the pressure against Chinese takeovers as a result of trade tensions between the US and China.

HedgeThink
208 Followers
HedgeThink.com is a Hedge Funds Thought Leadership platform that provides a range of premium resources for fund managers and investors, including: Breaking hedge fund news and press releases Interviews with leading fund managers and industry figures The latest compliance developments from around the globe Premium educational resources from hedge fund professionals Industry innovation news and features Hedge fund white papers The latest blog news, views, thoughts and analysis HedgeThink.com is a digital meeting place for fund managers and investors the world over. Our focus is firmly on thought leadership, technology, and where the industry is headed. Encouraging transparency, and fostering dialogue between hedge funds and accredited investors, HedgeThink.com is where anyone with an interest in fund creation and management can find everything they need to research and make the best investment decisions. HedgeThink.com is a new digital source for fund managers and investors at all levels of AUM, offering industry leaders, potential investors, and hedge funds a place to share useful resources, services, education, and research. At HedgeThink.com we are working hard to bring you the latest breaking information, industry news, tools, hedge fund PR, and in-depth analysis of the latest events. Contact us form: hedgethink.com/contact/ Email: info@ztudium.com Twitter: @hedgethink Opinions expressed at HedgeThink are those of the individual authors and do not necessarily represent the opinion of the HedgeThink team, or its management company Ztudium HedgeThink.com has not verified the accuracy or basis-in-fact of any claim or statement made by any independent author: Errors and omissions may occur. Any opinions, news, research, analyses, prices or other information contained on this website by HedgeThink.com, its employees, partners, or contributors are provided as general market commentary, and do not constitute investment advice.
Follow
To ensure this doesn’t happen in the future, please enable Javascript and cookies in your browser.
Is this happening to you frequently? Please report it on our feedback forum.
If you have an ad-blocker enabled you may be blocked from proceeding. Please disable your ad-blocker and refresh.