In keeping with historical trends, the S&P 500 Index followed the large December decline with an increase of 7.8%.

The median simulation calls for an increase in the Index of 1.25% for the month, well above the historical average.

The simulation results also estimate a 14.6% likelihood the S&P 500 will end February back in correction territory.

But as we cannot predict such external influences very well, the only reliable crystal ball is a probabilistic one." - Benoit Mandelbrot

C-J is a Monte Carlo simulation model used to assess risk in the S&P 500. Traditional stock market models suffer from a number of problems including fat tails, serial correlation, and the failure to account for volatility clustering. The fat-tail problem arises because traditional finance theory uses the normal distribution. For investors, the practical implication of such an approach is that traditional finance theory underestimates (and in some cases significantly underestimates) risk in the market.

C-J uses data on valuation, earnings, and short-term historical patterns in the stock market to correct for the problems noted above. C-J does this by using a series of non-normal conditional distributions. If you have read former Yale mathematician Benoit Mandelbrot's book (with Richard Hudson), The (Mis)behavior of Markets: A Fractal View of Financial Turbulence, then you should note that C-J is fractal by design. And while the model maintains a fractal nature because of its design, it also maintains statistical properties similar to the behavior of the S&P 500 over the last 60+ years.

The purpose of C-J is not to provide a single point estimate of where the S&P 500 will be at some future point. As investors, we don't see the underlying process generating movements in the market, we only see the outcomes, thus explaining why "expert" predictions are often wrong. As Nassim Taleb wrote in Black Swan, "Most models, of course, attempt to be precisely predictive, and not just descriptive in nature. I find this infuriating". To that end, C-J is intended to be descriptive in nature by providing not only a model that corrects for the problems discussed above but also does so in a probabilistic manner.

In an article I published last November, I noted the historical tendency for a large negative tail event to be followed by another large movement the following month. The real question, at least in a historical context, is what direction that movement would be. Back then, I noted that there have been 35 times when the S&P 500 fell by 6.5% or more in one month; in 21 of those cases, the S&P 500 moved + or -5% or more the following month. The phrase I used in that article was that volatility begets volatility.

Now, with all that said, I was curious what C-J had to say about February. The last time the market moved higher by 7.5% or more in one month was in October 2015 when the S&P 500 Index increased by 8.3%. Interestingly enough that was followed by an increase of only 0.05% in November. In this case, a volatile month was not followed by another volatile month. So, my question in looking at C-J was whether February 2019 would look like late 2015 or would a large movement in January bring about another large movement in February? C-J's February simulations are shown below: 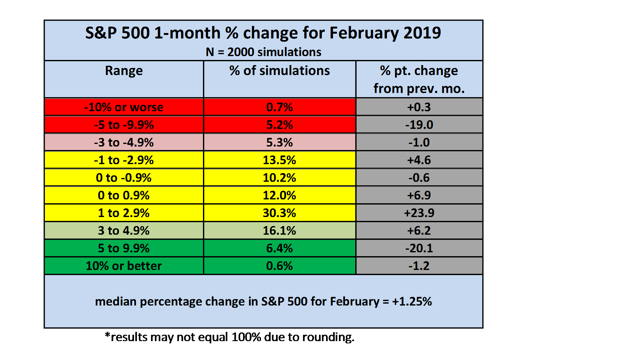 From the simulation results above, a number of points are noteworthy. First, the distribution has moved decidedly away from the tails and is now heavily concentrated in the +1% to +4.9% range. In fact, C-J now estimates a 46.4% chance the S&P 500 Index will increase within that range by the end of February. This is interesting because in total C-J estimates a 65.1% probability the Index will increase in February; that is only a few percentage points above the historical rate of occurrence. But in this particular case, that result is heavily concentrated in the +1% to +4.9% range. Second, the median simulation calls for an increase of 1.25% in the Index for the month. Such an increase is significantly above the historical average monthly increase and would have the S&P 500 at 2737.90 at the end of February. Finally, the market hit its all-time high of 2940.91 on September 21 of last year. From there it began a decline which, at least for the time being, hit bottom at 2351.10 on Christmas Eve. While the Index has recovered since then, only recently did it move out of correction territory (2646.82). With that being said, C-J now estimates a 14.6% likelihood that the S&P 500 Index will end February in correction territory or worse.

Given the underestimation of negative tail risk in traditional financial theory, I break out the negative tail estimates in more detail. And while C-J does not use the normal distribution, I include the -11.74% or worse category in the table below as it corresponds to 3 standard deviations below the average monthly percentage change. Broken out into more detail, the February negative tail results can be seen as:

If you look at the fourth column, you immediately see that the large decrease in the estimated likelihood of a negative tail event. Given the large movement in the Index in recent months and the tendency for large movements to be followed by large movements, the magnitude of the decrease in a negative tail event is rather surprising. Furthermore, the probabilities of a decline of 5 to 7 percent and 7 to 9 percent are now lower than either the rate of historical occurrence or the likelihood implied by traditional finance theory.

Disclaimer: This article contains model-based projections that are forward-looking and, as with any quantitative model, are subject to uncertainties and modeling assumptions. The C-J model is intended as a tool to assess risk in the S&P 500 and not as a forecast of the future value of the S&P 500 or any other market. The results of C-J are for informational purposes only. Nothing in this article should be construed as specific investment advice.

Follow Kevin Jacques and get email alerts
+
Add a comment
Disagree with this article? Submit your own.
To report a factual error in this article, click here.
Your feedback matters to us!