The US petroleum report, called "This Week In Petroleum", comes out every week on Wednesday. It gives us very real time information about the state of US petroleum production and usage. I find this report useful for it provides us year-over-year comparisons in demand that may give us a hint about the current state of the economy.

I have to admit, I was surprised myself to see that the 4-week average US finished gasoline demand for the the week ending January 26th, 2019, was up to 8.933 million barrels per day.

For the same 4-week period last year, when the US government was fully opened and operating, the US was consuming on average 8.806 million barrels per day. 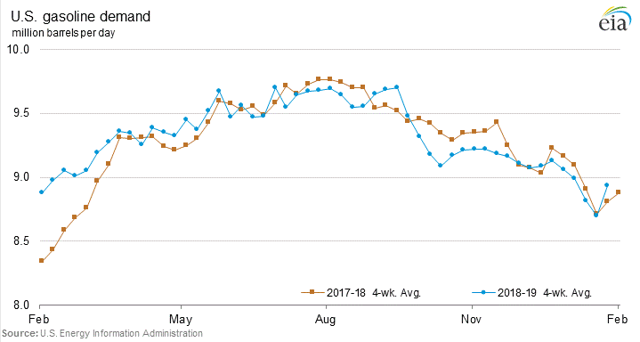 What is also interesting is that January's increase year over year is the largest gain since September of last year. We've been using less gas year over year for most of October, November and December too.

Driving to work, driving to the grocery store, driving to get beer or ice cream, driving anywhere just about always leads to some kind of economic activity.

This is creating a very strong indication that any concerns for what was supposed to be a hit to the US economy due to the government shutdown could prove to be less impactful overall than what some have feared.

Not to in any way debase the individual and family impact the shutdown had on the government workers and especially the contractors who lost pay and may not see it back at all.

For the jobs report, I always want to look at the aggregate hours worked figure vs. just the headline number of jobs created.

What I like to do is take the total non-farm payroll figure and multiply that by the average weekly hours to get an aggregate number of hours worked per week.

Taking this figure and doing a year-over-year percent change gives us a good sense of the momentum of the growth or decline in the rate of employment growth. This chart will go back 1 year.

What has happened now in January is we've seen the year-over-year rate of growth in aggregate hours worked up to 2.20%.

The average price of regular gasoline in the US was $2.90 in the first week of October. It dropped rapidly into January, stopping at $2.23 and it now averages around $2.25 a gallon.

Take a look at this chart showing year-over-year change in the price of a gallon of gas:

We are now in a period where the year-over-year price of gas is less than what it was a year ago. This just began in December.

The price of gas is now 35 cents less that what it was 1 year ago.

That means Americans are spending about $131 million less on gasoline per day than 1 year ago when the difference is 35 cents less that 1 year ago.

At this rate, it comes out to about $4 billion a month.

The savings in gasoline is going to equal more economic growth in the months ahead.

Basically, every single person who drives a car is getting a raise. Uber drivers especially!

This condition should put less fear in the markets and we could see stocks do well in the coming weeks ahead.

Jason Tillberg
1.46K Followers
Maker of hardwood roll top bread boxes, self taught in economics with focus on productivity and inflation.44 years old, married, have two daughters 9 and 11, and a 3 year old son. I live upstate New York near Ithaca.My profile pic is that of Joseph, from the story from the old testament, where he is telling the Pharaoh that he will have 7 years of famine and 7 years of plenty and in order to prepare, he would need to save 20% of his surplus during the years of plenty so that he would have not only grain for his nation, but grain to sell to the other nations.It tells the principle that we need to learn to live within the cycles of nature.Investing and allocating money requires that same understanding.With that said, I focus on what I believe the rate of inflation will be and how it relates to investments. I trust that understanding inflation will make for better informed investment decisions.I've been involved in stocks and investing since I was 13. Have had successes and mistakes, that I've hopefully learned from. I'm a fan of the following people to help give a perspective of my biases I may hold with regards to investment and economics: Adam Smith, Milton Friedman, Charles Schwab (Steel Tycoon), Peter Bernstein (Author), Henry Ford, Jay Gould, Ben Franklin, Aristotle, to name a few..
Follow