Welcome to the growth has stalled edition of Oil Markets Daily!

The highly anticipated EIA-914 report came out on Jan. 31, showing US oil production surging to 11.9 mb/d for the month of November. Oil markets initially sold-off on that, but close followers of the fundamentals know that the adjustment + weekly actually showed the production figure to be over ~12.1 mb/d for the month of November, so the 11.9 mb/d was actually a "disappointment" versus what the data showed. 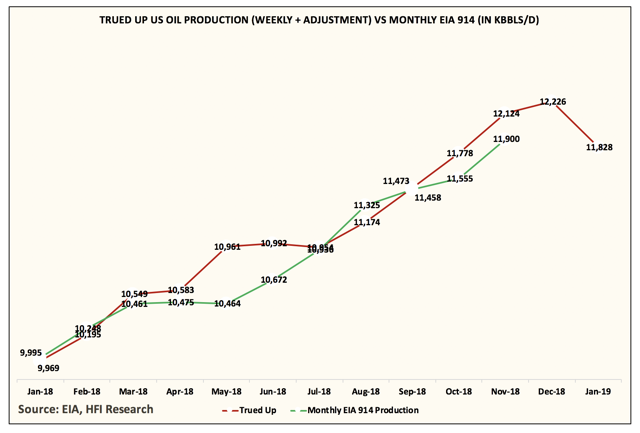 But more importantly, the important data to watch going forward is where is the trend of production going. According to the weekly + adjustment, the trend in US oil production for the last three months has been flat to down. This chart illustrates that the growth we saw from US shale over the summer is starting to stall. This is in line with our global oil supply & demand model indicating that Q1 will show stalled US production growth over Q4.

However, for those that track the data closely, if you take the exit production of ~12 mb/d, the y-o-y growth in 2019 will likely be closer to ~1.8 mb/d, again assuming US oil production exits 2019 at around ~12.9 mb/d. This shouldn't be a surprise because a higher exit production volume gives you a higher base for the upcoming year, so the year-over-year calculation will skew to the upside. But in reality, the growth this year may just be ~800k b/d to 900k b/d exit-to-exit, which is a big slowdown from the +2 mb/d we saw last year.

In addition, it's important to look at the EIA-914 data to see where the growth came from. This is what we saw in November:

North Dakota saw a decline of 11k b/d m-o-m, and December should show another decrease in production.

Based on our shale basin analysis, it appears that basins outside of the Permian are now starting to see well productivity growth stall/moving lower. You can see our report here which detailed some of the findings.

If US shale well completions are flat this year versus last year, a higher percent of new well production will go towards replacing declines last year. So in order to keep the same momentum going forward, US shale needs to complete more wells with either the same productivity or higher productivity. It's akin to a runner running a treadmill, but that treadmill is getting faster and faster. US shale needs to complete more and more wells each year just to stay flat, which will be a tall order considering 2018 broke the record by a mile.

With WTI in the $50s and private equity capital drying up, we think PE firms will be the hardest hit in 2019, resulting in much less growth from that group. Oil majors will likely keep Permian growth strong, so that will still boost Permian production this year. Other public companies in the Permian have already announced a reduction in capex and lower growth targets. So far, the things are aligned with our model.

For readers, the key will be to keep watching the trend in the weekly production + adjustment figure. If we see the trend reversing or staying the same, we will post the update in next month's EIA-914 report.

In the coming month, we will be starting an oil trading portfolio. We have built a framework for understanding near-term trends in oil prices and look forward to initiating this new oil trading portfolio to dampen the volatility of owning energy stocks for the long-term. For readers interested in the methodology or how we are thinking about this framework, we published a piece over the weekend describing it to our subscribers. We are also offering a 2-week free trial, so you can sign up here and see for yourself. We hope to see you join the HFI Research community.