It will be a very busy week as earnings season is in full swing. This week, there could be as many as seven Canadian Dividend All-Stars raising dividends. This is one of the busiest weeks of the year. First, let’s take a look at last week. Of note, all figures are in Canadian dollars unless otherwise noted.

Last week was the first week of the year in which all companies who were expected to raise dividends came through for investors. Canadian National Railway (CNI)(TSE:CNR) posted a higher than expected raise while Metro Inc (OTCPK:MTRAF)(TSE: MRU) and Exco Technologies Ltd (OTCPK:EXCOF)(TSE:XTC) raised in-line with expectations.

CN Rail raised dividends by 18%, much higher than historical averages. A reader correctly pointed out last week, that I incorrectly stated CN Rail’s last raise was 20%. Last year’s raise was only 10.30%. Regardless, the raise is much higher than anticipated and welcomed by shareholders.

Metro and Exco both raised dividends in-line with historical averages. Metro’s 11% raise brings its quarterly dividend to $0.20 per share. Exco, which met earnings estimates, raised dividends by 5.88% or $0.005 per share. Metro has extended its streak to 25 years, and Exco to 14 years.

What can investors expect: Intact Financial is Canada’s largest property and casualty insurance company. Founded in 1809, the company has consistently raised dividends along with fourth quarter and year-end results.

Intact has been fairly reliable with historical dividend raises between 9% and 10%. Its last two raises were exactly $0.06 per share, and I expect similar this time around.

What can investors expect: Suncor is one of the premier oil & gas companies in the country. It has an attractive 3.28% yield and a 16-year dividend growth streak. Since 2016, the company has raised dividends along with fourth quarter results.

Despite the volatility of Canada’s oil patch, Suncor has delivered above-average dividend growth. Its three-year average growth rate is 8.1% and last year, it delivered a double-digit raise (12.50%). Suncor is incredibly difficult to forecast but I do expect a raise similar to last year’s $0.04 per share bump.

Given the recent downtrend in the oil patch, it is not surprising to see Suncor as one of the best-valued companies on this week’s list. I prefer to look at the company based on operating cash flows. Why? Because it operates in an industry where earnings are highly volatile. In looking at the F.A.S.T. Graphs below, the recent downtrend has presented investors with a good entry point. 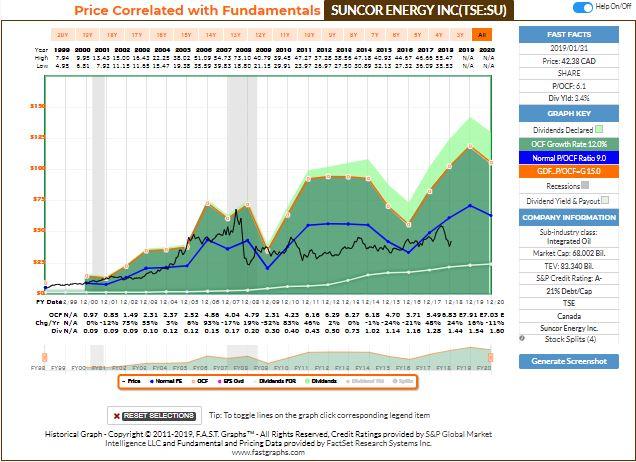 What can investors expect: Also reporting earnings on Tuesday is Domtar, one of the largest paper & pulp companies. Domtar is on the verge of extending its dividend growth streak to a decade. After keeping its dividend steady for seven straight quarters, it finally raised dividends along with fourth quarter results in February of last year. Of note, the company pays out its dividend in US funds.

Over the past few years, Domtar’s dividend growth has been in the low single digits. Of all those on this weeks list, Domtar is the least likely to raise. It is operating in a tough industry and is main business has been in a secular decline for years. Should it raise, expect no more than another low-single digit bump.

What can investors expect: Canada’s largest telecommunications company BCE, is expected to extent its dividend growth streak this comping Thursday. Like clockwork, the company announces its dividend raise along with fourth quarter results.

BCE is not going to wow dividend growth investors. It is a behemoth of a company, and mid-single digit dividend growth around 5% has been the norm over the past one, three and five years. With a payout ratio nearing 100%, and low-to-mid single-digit earnings growth, do not expect any different.

What can investors expect: A trio in the Brookfield family of investments should be rewarding investors with a dividend raise this week. Brookfield is a household name in the dividend community with high-yields and reliable dividend growth. Of note, all Brookfield companies pay their dividends in U.S. funds.

Brookfield Renewable kicks things off on Wednesday. It has averaged mid-single digit dividend growth since its streak began. There is no reason to expect any different this year.

Next up is Brookfield Property Partners which is scheduled to report on Thursday. The company has a mid-to-high single-digit dividend growth rate. I expect a raise in-line with its two cent raise from 2018.

Brookfield Infrastructure Partners closes out the week. It has the longest dividend growth streak of the bunch, and the highest dividend growth rate. On average it has raised dividends by 10% over the past three and five years. Last year, the company raised dividends by 8%, below its historical averages. Is slowing growth a sign of things to come?

Mat Litalien
2.68K Followers
Two of his favourite stocks, goeasy and Well Health Technologies were up 39% and 341% in 2020. Mat is primarily interested in fundamental analysis, is focused on the long term and his portfolio is composed dividend paying equities and growth stocks. Mat has his MBA and is a founding partner of one of the fastest growing investment services in Canada (StockTrades Premium).
Follow

Disclosure: I am/we are long CNI, SU, EXCOF. I wrote this article myself, and it expresses my own opinions. I am not receiving compensation for it (other than from Seeking Alpha). I have no business relationship with any company whose stock is mentioned in this article.