Monday February 4: Five things the markets are talking about

Trading overnight was subdued with many of the Asian markets closed for the Lunar New Year.

On the Brexit front, European Commissioner Juncker said that PM Theresa May's bid to reopen the UK's divorce deal with the EU has increased the chances of a "disorderly Brexit" and that EU leaders should prepare for the worst.

The EU has offered no signs of giving any concessions to the UK over the next few weeks. Nevertheless, PM May is still planning on going to Brussels to make her case. The EU seems set "not" to offer her anything until after the UK has another vote on February 14th.

The next move for investors' risk appetite will likely be dictated by ongoing US corporate earnings for this week.

On tap, tomorrow, the Reserve Bank of Australia (RBA), and on Thursday, the Bank of England (BoE) will deliver their respective monetary policy announcements. Also, on Thursday, investors will also see industrial production from Germany, which has been weak, and from France and Italy both out on Friday. Elsewhere, CAD trade balance & US ISM non-manufacturing PMI (Feb. 5), US advanced GDP, retail sales & NZD unemployment (Feb. 6) and CAD employment (Feb. 8).

Note: Beginning today, the market can expect to start getting some of the US data we missed from the US government shutdown - GDP, personal income and spending.

In Japan overnight, the Nikkei booked moderate gains (+0.5%) amid strength in commodity and brokerage stocks and overcame a slump in electronics (Sony was down -8%). Elsewhere, all but one of the 33 Topix sectors rallied overnight following Friday's strong US jobs report. The broader Topix gained +1.1%.

Down-under, Aussie stocks climbed to new session highs before the close, as investors took some late positions ahead of a long-awaited report on alleged financial-sector wrongdoing. The review has pressured both financial and insurance stocks for the past 12-months, the ASX 200 rallied +0.5%.

Note: China's financial markets are closed all week, while those in S. Korea are shut until Thursday.

In Hong Kong, equities edged a tad higher in half-day trading overnight, on the back of mildly positive data on the Chinese economy. The Hang Seng index closed up +0.2%, while the Hang Seng China Enterprises index fell -0.3%.

In Europe, regional bourses trade flat to slightly higher ahead of a busy week for corporate earnings as China is closed for the lunar New Year. 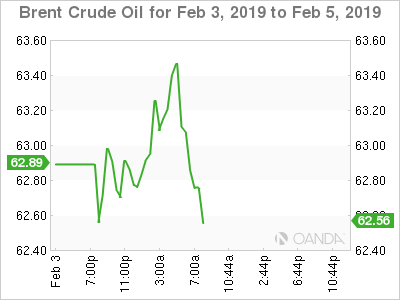 Oil hit a new 2019 high in Europe this morning as OPEC-led supply cuts and US sanctions against Venezuela's petroleum industry offset forecasts of weaker demand and an economic slowdown.

Analysts note that there are currently little signs of any overhang in the market now that the US has imposed sanctions on Venezuela, on top of the reduced supply from Saudi Arabia.

Note: Last week, the US administration announced export sanctions against state-owned oil firm Petroleos de Venezuela SA (approx. +500k bpd) - this has led to some disruption for oil refineries on the Gulf coast. They have had to seek alternative heavy crude supplies from Canada.

OPEC supply fell this month by the largest amount in two-years, which has helped to offset limited compliance so far by non-OPEC Russia.

While OPEC cuts, the US continues willing to expand its supply. However, data on Friday showed a drop in the number of US oil rigs on line to their lowest in eight-months, lending temporary prices some support.

Ahead of the US open, gold prices have fallen in thin trade as risk-aversion recedes amid some signs of progress in Sino-US trade talks and as the dollar firmed. Spot gold has fallen about -0.4% to +$1,313.38 per ounce, after having hit +$1,326.30 last week - its highest level since April 26. 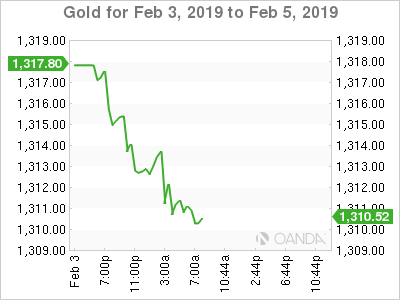 3. Italian sovereign yields back up aggressively

Italy's government borrowing costs have rallied to their highest level in three-weeks in the Euro session, pushed up by heightened concern that the Italian economic outlook will worsen the country's fiscal position.

Across the Italian curve, BTP yields have backed up an aggressive +8 bps as data last week confirmed that Italy's economy had slipped into a recession in Q4, 2018. With Italian manufacturing activity contracting for a fourth consecutive month in January suggests that things could get worse for the economy. The spread of Italy's 10-year BTP's over Germany's advanced +3 bps to +2.61% to the widest in almost three-weeks.

Weaker data in general has been supporting eurozone bond markets as investors bet the ECB will keep record-low rates in place for longer. Germany's 10-year Bund yield has climbed less than +1 bps to +0.17%.

Note: While no monetary policy changes are expected by the BoE on Thursday, Governor Carney could revise down its above-trend UK economic growth expectations. Continued Brexit uncertainty coupled with weaker economic news would be reason enough to lower projections. 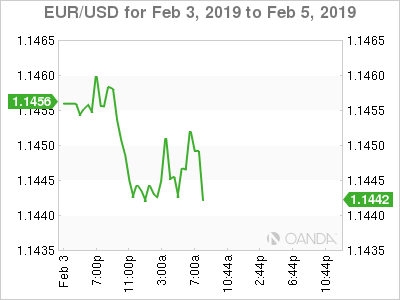 4. Dollar in demand for the moment

The USD is holding onto its recent ranges despite the recent 'dovish' FOMC statement last week. Last Friday's strong payroll number is helping to support the dollar 'bulls' course of action as US growth remains quite strong.

The pound (£1.3053) has slumped to below the psychological £1.3100 handle outright as the UK parliamentary vote last week still does not entirely rule out a 'no-deal' Brexit - PM May is again tasked with attempting to re-open negotiations (including a possible delay) with the EU. It looks like the Brexit process will 'go down to the wire' - the current deadline for the UK to leave the EU is March 29. The EU has been very forthright in their views and what they are willing to accept and not accept. PM May can expect a hostile greeting from its EU partners as she attempts reopen closed doors. 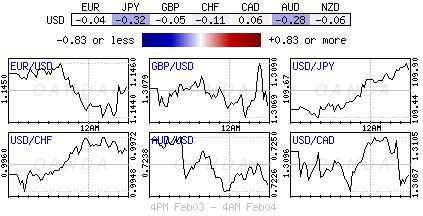