Japan's manufacturing economy failed to grow for the first time in two and a half years in January as a mounting global trade downturn took an increasing toll on the country's exporters and pushed business sentiment to its lowest for six years. The stalling of business activity ended the country's longest growth spell for a decade and raises questions over the ability of the economy to weather headwinds in 2019, which look set to include rising global trade tensions and a planned sales tax rise. 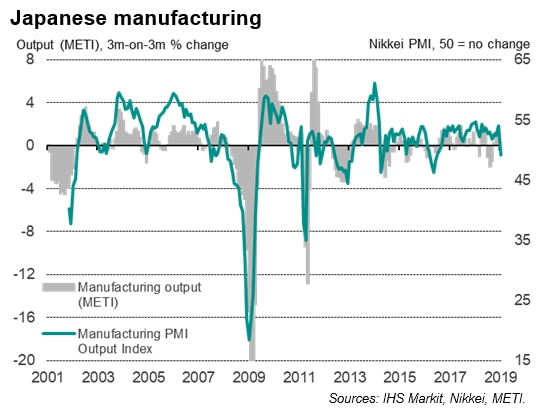 Flat start to the year

The first piece of economic data for 2019 suggests the Japanese economy started the year on a disappointing note. The Nikkei Manufacturing Purchasing Managers' Index (PMI™) fell sharply from 52.6 in December to 50.0 in December according to the flash estimate released on 24th January.

With 50.0 being the neutral level between growth and expansion, January's PMI reading signalled a stagnation of business conditions during the month. It was the lowest reading since August 2016.

The headline PMI is a composite indicator based on a variety of survey sub-indices, the analysis of which paints an even gloomier picture. The PMI output index signalled the first monthly fall in factory production since August 2016, while the new orders index pointed to the first reduction of new work inflows since September 2016.

Factory headcounts meanwhile rose at the weakest pace since November 2016 as firms scaled back expansion plans in line with reduced order book growth.

The driving force behind the slew of disappointing survey indices was a sharp deterioration in export orders, which fell for a second successive month in December, dropping at the steepest rate for two and a half years. 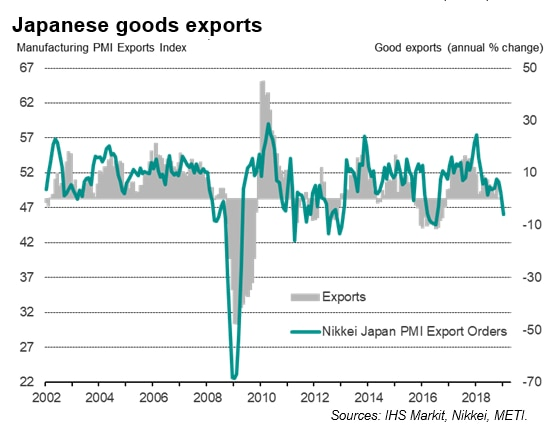 As to future, firms' optimism about the coming 12 months slipped sharply at the start of 2019, down to its lowest since November 2012.

Increased pessimism with regard to the future production trend was often blamed on the impact of trade wars alongside slower demand from markets such as China. Particular stress was seen in the auto industry. Japan is the world's third largest producer of autos, but the sector has seen demand turn down sharply in recent months. Detailed sector PMI data showed global auto output new orders dropping at the fastest rate for nearly six years at the end of 2018.

The PMI has acted as a reliable barometer of the health of the Japanese economy in recent years, and as such the weak reading casts a shadow over the outlook for 2019, and goes some way to corroborate our below-consensus forecasts for the year.

IHS Markit has revised down its outlook for Japan's GDP growth to 0.8% in 2019 - principally in response to the deteriorating external environment against a consensus forecast of 1.0%. However, even this modest expansion is predicated on consumers stepping up their spending ahead of a twice-deferred planned hike in the sales tax from 8% to 10% in October 2019. Payback comes in 2020, when we expect economic growth to slow to 0.5% in 2020 as consumer spending fades again.

However, even these downgraded forecasts may prove optimistic unless the PMI revives.

It's clearly important at this stage to verify the signals from the PMI, and to review the methodology.

There are two Japanese PMI surveys, covering manufacturing and services, both of which are compiled for Nikkei by IHS Markit applying the same methodology used successfully in over 40 countries.

The surveys are based on panels of contributing companies that accurately replicate the structure of the economy being surveyed. The PMI panels therefore reflect the true composition of manufacturing and private sector services in Japan by sub-sector contribution (autos, chemicals, hotels, banking etc.), as well as ensuring the correct mix of small, medium and large companies.

The data are collected at mid-month asking companies to report on the current situation compared to the prior month for a range of business metrics, including output, new orders, exports, employment, and prices. These responses are based on actual business trends, not sentiment. Only one question is opinion-based, which asks companies about their prospects for the year ahead.

The survey responses are weighted according to company size and sector importance, with the resulting data adjusted to take into account normal seasonal influences.

Data collection for the Japanese manufacturing and service sector surveys started in 2001 and 2007 respectively, providing a rich time series on which to test the track record.

The manufacturing data are published on the first working day of each month while the service sector numbers are released on the third working day, with data referring to the month just passed. As such, the PMIs tend to be the first available economic data released each month. However, even these releases are preceded by an early 'flash' reading of the manufacturing PMI, issued around one week before the end of each month. 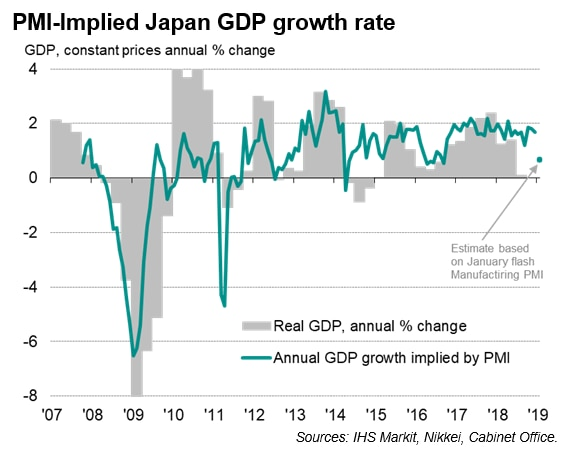 Combining the indicators from the manufacturing and service sector PMI surveys provides overall gauges of private sector activity, which in turn provides useful indicators of official data such as GDP, inflation and employment. In many cases, GDP 'nowcasts' based on these 'composite' PMI indicators are particularly important inputs in the policymaking process, notably at the European Central Bank and the Bank of England, as well as the US Fed. The "outstanding" track record of the euro area PMI in tracking GDP, for example, is described in a recent paper by ECB staff member Gabriel de Bondt.

A simple regression-based model of GDP based on the PMI allows the survey diffusion indices to be converted into an implied growth rate for easy interpretation of the data. In the case of Japan, the PMI not just provides an accurate insight into turning points of the Japanese economy but also the rate of change, with only one exception: 2014. This exception serves to highlight how the divergence between the PMI and GDP can be as interesting as periods of alignment.

The PMI surveys indicated steady GDP growth averaging 1.3% throughout 2014, contrasting with a downturn indicated by the official GDP numbers. However, research from the Bank of Japan, which analysed annual tax revenues, suggests that the official data greatly understated the pace of economic growth in 2014, lending weight to the assertion that the PMI sent the more accurate picture of the true performance of the economy. 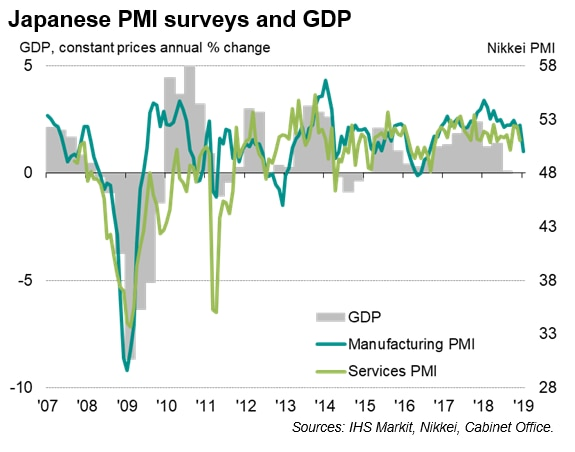 The PMI tells us two important things about the Japanese economy in recent months. First, the contraction of quarterly GDP in the third quarter of last year (the latest official estimate currently available) probably overstated the weakness of the economy at that time: the PMI remained very much in growth territory over this period and up to the end of 2018. This suggests that the third quarter GDP numbers are likely to eventually be revised higher. Second, the flash manufacturing PMI raises a red warning light as to the health of the economy at the start of 2019, suggesting that forthcoming GDP releases could disappoint. Much will depend on the extent to which the service sector can act as a buffer to the headwind of dampened external demand.

Markit
2.31K Followers
IHS Markit (Nasdaq: INFO) is a world leader in critical information, analytics and solutions for the major industries and markets that drive economies worldwide. The company delivers next-generation information, analytics and solutions to customers in business, finance and government, improving their operational efficiency and providing deep insights that lead to well-informed, confident decisions. IHS Markit has more than 50,000 key business and government customers, including 80 percent of the Fortune Global 500 and the world’s leading financial institutions. Headquartered in London, IHS Markit is committed to sustainable, profitable growth.
Follow
1 Comment
To ensure this doesn’t happen in the future, please enable Javascript and cookies in your browser.
Is this happening to you frequently? Please report it on our feedback forum.
If you have an ad-blocker enabled you may be blocked from proceeding. Please disable your ad-blocker and refresh.